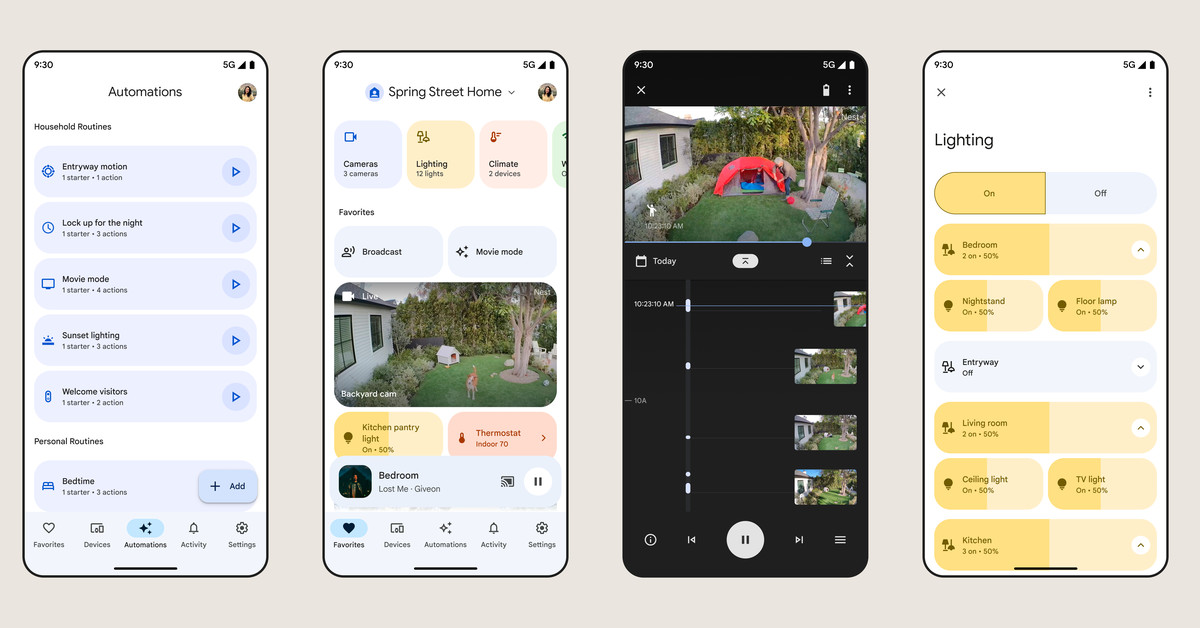 Google is previewing a completely new Home app for controlling its smart home devices and the many more gadgets it anticipates people will add to their homes once the new smart home standard Matter arrives. The new app is rolling out initially as a public preview starting in a few weeks, and you can sign up to try it out soon.

Anish Kattukaran of Google Nest described the new Home app — which adds a new Favorites page and support for sensors to trigger automations and brings over the camera interface from the Nest app — as “the single best place to set up, control, and automate Nest devices and every Matter device.”

The company’s also bringing Google Home to the web later this year, allowing you to view Nest camera and doorbell feeds from a web browser at home.google.com. Plus, you’ll be able to control your home on your wrist. The Home app arrives on Wear OS this week, debuting on the new Google Pixel Watch and rolling out to Wear OS 3 shortly after. The app will let you turn off the lights, adjust your Nest Thermostat, and get notifications from your Nest cameras on your wrist.

Google is fully committed to Matter, the new smart home connectivity standard that aims to address many industry pain points such as complicated setup, confusing integrations, and poor reliability.

In a briefing with The Verge, Google Nest’s Kevin Poe confirmed to me that the Google Nest Hub Max, Nest Hub (2nd gen), and all of Google’s Nest Wifi routers (including the newly announced Nest Wifi Pro) will be Matter controllers for Google Home when the standard arrives later this year. This means those devices can control any Matter devices locally in the home, either through their interface or through the Home app.

The Nest devices will also be Thread border routers to provide connectivity between the Thread mesh network and Wi-Fi. Thread is a key protocol of Matter; it allows devices to communicate more efficiently on your home network.

Additionally, Poe confirmed that Fast Pair for Android will work with Matter, enabling Android phones to automatically detect any Matter devices on your network and help you set them up with a few taps, including linking to any compatible Matter controller app on your smartphone. Poe demonstrated setting up a smart plug with the option of adding it to the Google Home app or the Eve app.

Customization is at the core of the new Google Home app, with the homepage of the app now being called “Favorites.” Here, you can create a personalized view of the devices, actions, or automations you want to access most often.

This includes live feeds from any camera you select as a favorite, which will play in the tile as soon as you open the app. Plus, any device you add — from light bulbs to locks — will give you a live status when the app opens so you can quickly see what’s what in your home.

Above the Favorites page is a new Spaces feature that’s akin to the Apple Home app’s new Shortcuts buttons. These take you to a collection of similar devices such as lights, cameras, climate, and Wi-Fi devices.

You could have a Pet Space for your pet cam, pet feeder, robot vacuum, and air purifier

Kattukaran customs The Verge that Google plans to add the option for custom Spaces where you can group together devices outside of traditional room groups next year. For example, you could have a Pet Space for your pet cam, pet feeder, robot vacuum, and air purifier.

Also on the Favorites tab is a floating mini media player, which gives you quick access to controls for any media playing in your home, including the Google TV remote interface. It also allows you to swipe through to control any other devices playing music or video in your home.

The Devices tab takes you to the traditional room view — still in alphabetical order but now with live previews of any cameras in each room. Here, you can control and see the state of any device.

When you click into a camera tile, you go into a camera controller page where you see a live view of the camera above a vertical timeline. Here, you can scroll through any video history in the same view the Nest app offers. This includes small snapshots along the timeline so you can quickly see what might be most relevant. You can choose to see every motion event or filter by activity, such as person or animal. This is a significant improvement on the old Home app, where you had to tap multiple times to get to recorded video.

The public preview of the Home app will work with all current and discontinued Nest cameras but will still only show video history for cameras made after 2021. Kattukaran says that, over the next year, Google will move the legacy cameras fully into the Home app. “The Nest app was built for wired cams, not battery-powered cameras,” he says, explaining why the transition is taking time.

Saving the best for last

Finally, Google is bringing sensor support to the Google Home ecosystem. This means you will be able to trigger automations by motion. It is not clear if contact sensors or other sensor types such as leak or smoke detectors will also work. I’ve reached out to Google for clarification.

Kattukaran did say the Nest Protect smoke alarms will be migrated to the new Home app, so I’m hoping they can be used as a trigger for automations, too. Additionally, he showed pressing the doorbell as triggering automation, a sign that cameras might also be triggers based on motion sensing.

A lack of triggers (or starters, as Google calls them) has been a major problem for Google Home automations. To date, you could only start an automation based on time of day, when you dismiss an alarm, by touch in the app, or by using a voice command.

While the automation capabilities in the app still appear to be fairly basic — although they do now include the ability to schedule cameras to turn on and off — Google is introducing a script editor early next year. This web-based editor is designed for power users who want to create more complicated automations with “complex triggers and multiple conditions,” says Kattukaran.

The public preview of the new Google Home app will run for a while before the Home app is officially launched, says Kattukaran. You will be able to sign up for the preview in the Google Home app soon and updates will start to roll out in a “few weeks.” The preview will continue once the new Home app arrives, as Google says it will keep fine-tuning the app based on user feedback.

Correction, Tuesday, October 4th, 9:45 AM: This article originally stated you could sign up to join the preview of the Google Home app today, but Google has clarified the sign-up page will be available at a later date. 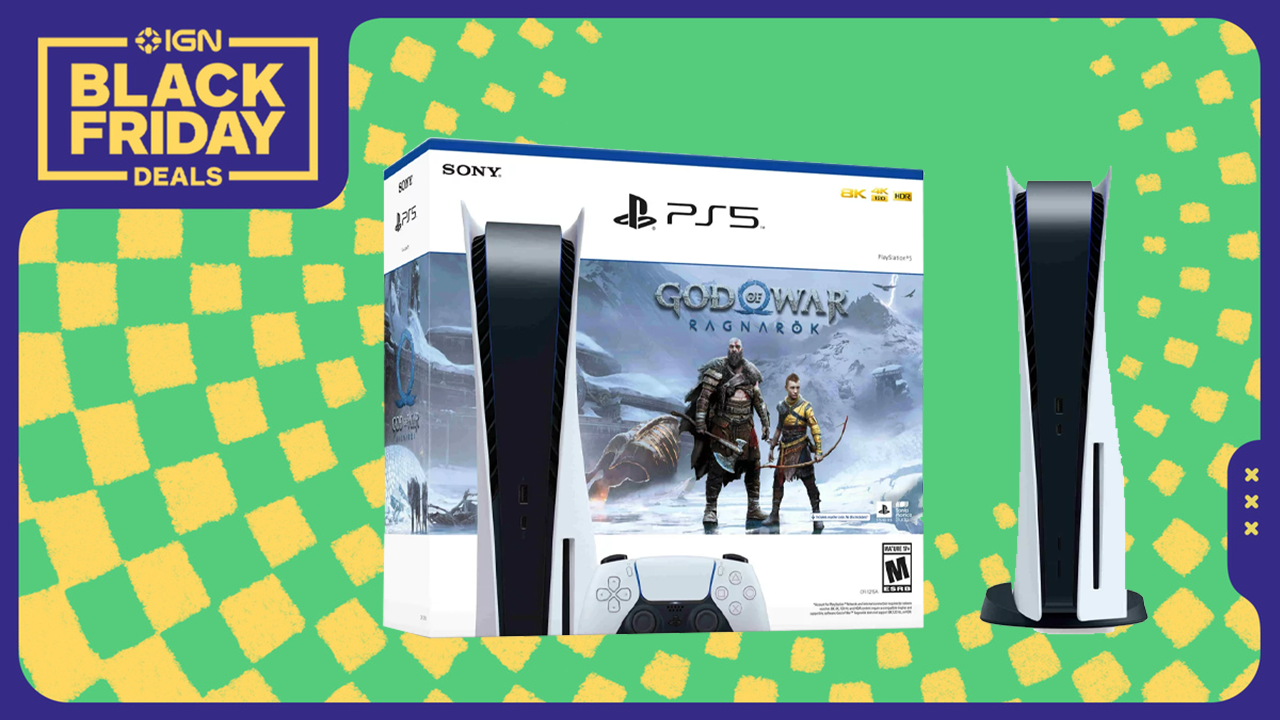 Walmart Has PS5 Consoles Available for Everyone 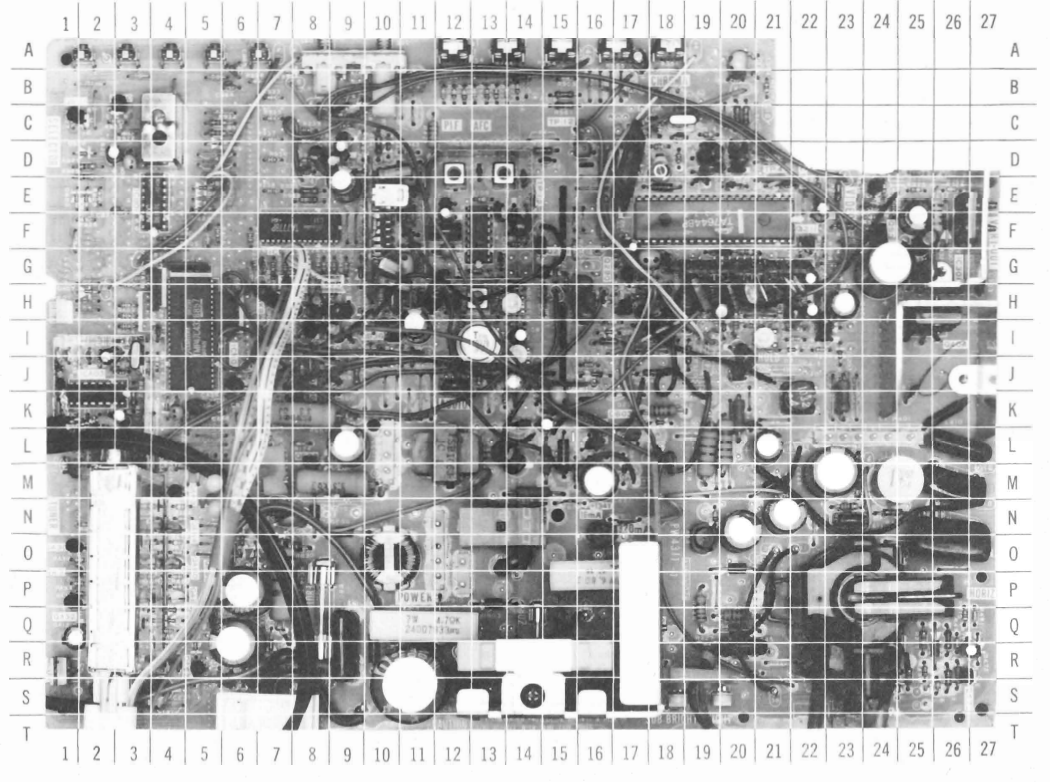 How To Repair? The Death Of Schematics