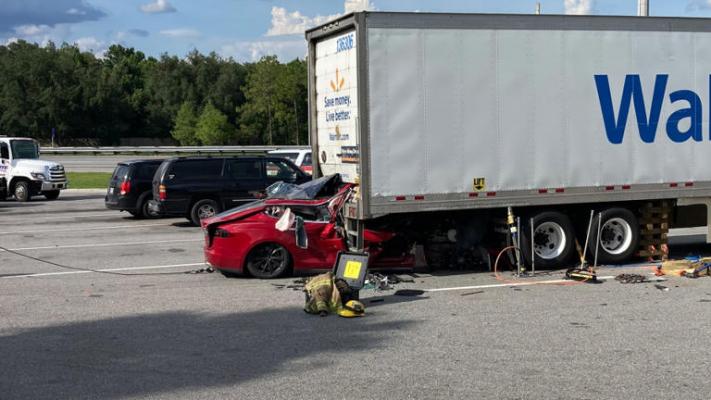 By the edhat staff

A couple from Lompoc died when their Tesla crashed into the back of a parked semi-truck in Florida this week.

Florida Highway Patrol confirms the driver, a 66-year-old woman, and the passenger, a 67-year-old man, both from Lompoc, died at the scene.

Troopers report around 2:00 pm Wednesday, the Tesla was driving south on I-75 in Alachua County, Florida near Gainesville, when it exited for the rest area.

For unknown reasons, according to Troopers, it entered the parking lot and slammed into the rear of a Walmart tractor-trailer that was parked.

The red Tesla hit with such force that it wedged underneath the trailer. Responding firefighters needed a tow cable to remove the sedan from the trailer.

Both the Tesla driver and passenger died as a result of the collision. The driver of the tractor-trailer was uninjured.

The US government auto safety watchdog has sent out a team to investigate the crash. The National Highway Traffic Safety Administration has not yet confirmed if the Tesla was operating on one of the partially automated driving systems.

A Florida Highway Patrol spokesperson stated it was too early in their investigation to know if the Tesla was on autopilot when it crashed.

The names of the Lompoc couple has yet to be released.