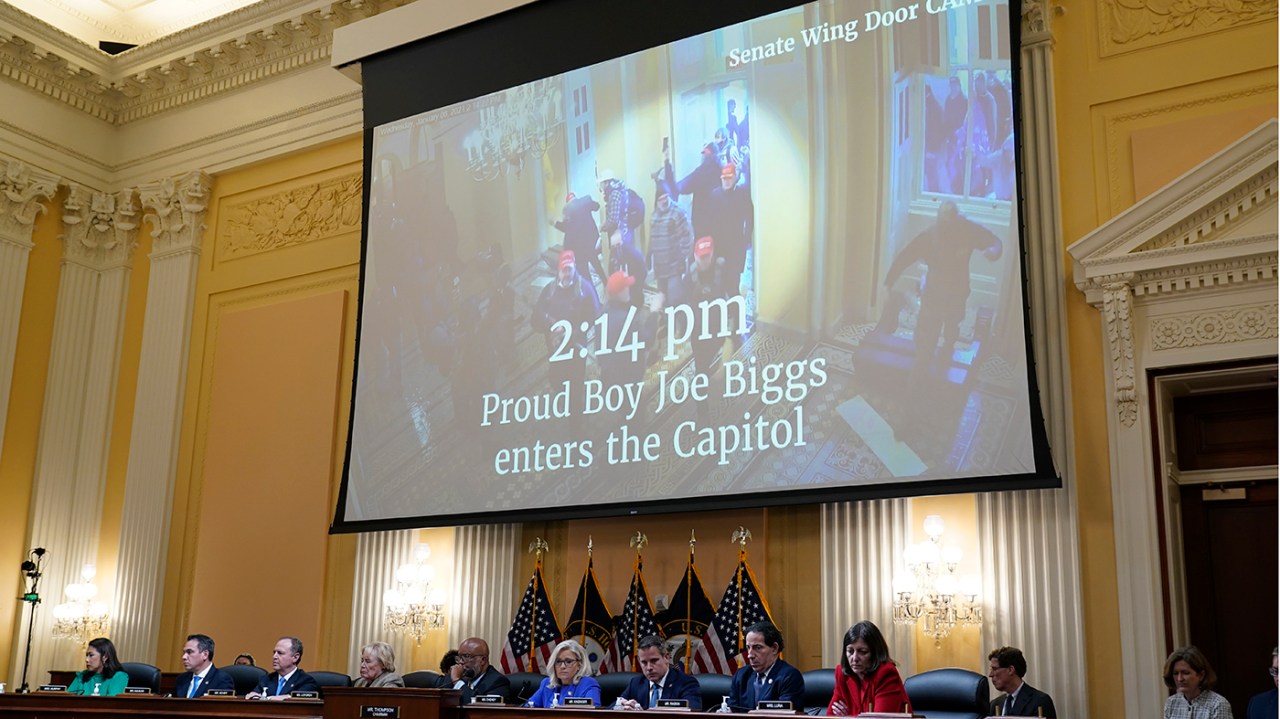 The House committee investigating last year’s Capitol rampage will soon turn its gaze to the role played by far-right extremists, examining not only the influence of nationalist networks in carrying out the attack but also what coordination, if any, the Trump White House had with those groups leading up to the violence.

The panel’s investigators have already teased the potential connection between former President Trump and the ring-wing extremists who stormed the Capitol on Jan. 6, 2021, using last month’s public hearing with a former West Wing aide to suggest direct links between some of Trump’s closest allies and leaders of several prominent nationalist groups now accused of spearheading the attack.

Heading into the next hearing on Tuesday, members of the panel are already promising to reveal previously undisclosed information they say will substantiate those ties.

“We will be connecting the dots, as people know,” Rep. Zoe Lofgren (D-Calif.), A member of the select committee, told MSNBC on Thursday. “This was not just an event that unfolded. It was planned. Who did the planning, and who were they connected with? How did it unfold? ”

The cast of characters the committee has already implicated in the scheme to overturn the election results reads like a who’s who of Trump’s inner circle.

It includes John Eastman and Rudy Giuliani, two legal advisers to the former president who set up a “war room” at a Washington hotel on Jan. 5; Michael Flynn and Roger Stone, two allies in the “Stop the Steal” movement who were indicted for unrelated crimes but pardoned by Trump; and Mark Meadows, Trump’s former chief of staff who was acting as a liaison between Trump and the other four men, according to Cassidy Hutchinson, a former senior Meadows aide who testified before the select committee on June 28.

On the periphery were the extremist groups, including the Proud Boys and the Oath Keepers, that gathered in Washington on Jan. 6 as part of Trump’s effort to overturn his election defeat.

The lines between the two worlds form a complex matrix, and the committee has not yet demonstrated direct connections between the Trump confidantes and the extremist groups that were on the front lines of the violence at the Capitol.

Yet Rep. Jamie Raskin (D-Md.), A constitutional lawyer who sits on the select committee, has promised to dig into those associations when he leads the questioning, along with Rep. Stephanie Murphy (D-Fla.), At Tuesday’s hearing. And outside experts who monitor hate groups are eager to see what turns up.

“If coordination did exist, what form did it take? Who were the conduits for information? ” said Cassie Miller, senior research analyst at the Southern Poverty Law Center, which tracks extremist groups of all stripes around the country.

“But we should also recognize that formal coordination was not necessary for Trump to impact the actions of groups like the Proud Boys during the months leading up to the insurrection or during the day itself,” Miller quickly added. “This is a group that has long wanted to act as the foot soldiers for Trumpism, and the Stop the Steal movement and insurrection gave them the opportunity to do so.”

Some connections between Trump’s associates and the far-right groups had been established long before the select committee began a series of public hearings last month.

Both Flynn and Stone, for instance, have long been known to use security details provided by far-right groups, including the Proud Boys, Oath Keepers and 1st Amendment Praetorian, which had protected Flynn during an election protest in Washington in mid-December. Stone had rallied with Proud Boys leaders, including Chairman Enrique Tarrio, at a similar protest the same month and was reportedly protected by members of the Oath Keepers at the Capitol on Jan. 6.

While neither Stone nor Flynn was a part of the Trump campaign or administration on Jan. 6, the investigation has turned up a direct link.

On. Jan. 5, Hutchinson told investigators, Trump asked Meadows to contact Stone and Flynn about their plans for the following day, when Congress would convene to certify President Biden’s election victory. She said she is “under the impression” that Meadows spoke with both men but had no indication of what was said.

Meadows has declined to speak with the investigators, even under subpoena, leading the House to hold him in contempt of Congress.

Hutchinson also testified about the West Wing’s interest in a meeting of Trump allies at the Willard Hotel, a posh locale near the White House, on the evening of Jan. 5. That gathering was attended by Eastman and Giuliani, among others, she said, and Meadows had sought to join them there. Hutchinson told Meadows it was a bad idea, she testified, and Meadows ultimately phoned into the meeting instead.

Hutchinson suggested that Giuliani was also associating with the extremist groups.

Rachel Kleinfeld, a senior fellow at the Carnegie Endowment for International Peace, said the Trump campaign was courting militia groups since the very beginning, praising their attendance at rallies as they increasingly became part of the security at events.

Those callouts would get more specific over time, including a message to the Proud Boys to “stand back and stand by” at a debate during the 2020 election cycle.

“Trump knew that militia groups liked him, were highly supportive of him and were willing to protect him and were willing to offer themselves to protect him. He knew that he could mobilize those groups through tweets and through callouts, like the ‘stand back and stand by,’ which the Proud Boys [documentarian] at the first hearing said tripled their membership, ”Kleinfeld said.

Both Stone and Flynn spoke with the committee’s investigators only to plead the Fifth numerous times. The committee has shown little of those filmed depositions beyond a clip of Flynn declining to answer whether he believes in the peaceful transfer of power.

Both Tarrio and Rhodes have been indicted, along with other members of their respective groups, on charges of seditious conspiracy for their role in the Capitol attack. If convicted, they face up to 20 years in prison.

Lofgren says Steve Bannon likely to be deposed by Jan. 6 committee Jan 6 panel member: Cipollone provided ‘relevant information about what was happening in the White House’

Kleinfeld said that even if there is no evidence of direct contact between Trump and the extremists, the former president’s success in mobilizing those groups was a major factor leading to the violence at the Capitol.

“It’s not that Trump was calling the Oath Keepers – although Roger Stone may have been,” she said. “It is that Trump or the Trump campaign was organizing this response so that it was ready and so that it could pressure Republicans who would not do his bidding and ultimately pressure actors who [were needed] to carry out one part or another of this plan. ”

“As all the different dominoes kept falling and his plan was not working,” she added, “this was the last-ditch effort for Jan. 6. ”