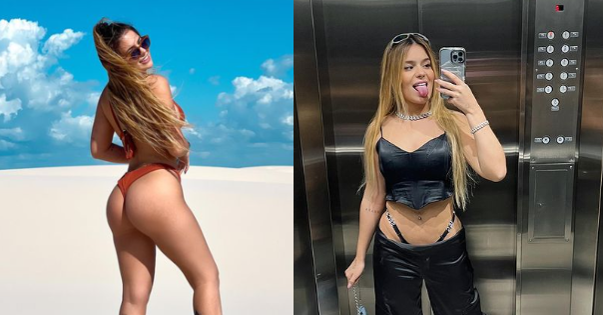 Brazilian influencer Viih Tube, whose real name is Vitória De Felice Moraes, wants you to believe she ended up in a wheelchair because she held her farts for too long.

Viih shared a picture of herself being pushed in a wheelchair through an airport in Portugal. She told her more than 23 million Instagram followers that she was experiencing unbearable pain.

The 21-year-old was hanging out with her reality star boyfriend Eliezer at the Rock in Rio Lisboa 2022 music festival prior to the stomach pain. Fortunately for Viih, the pain was nothing serious and turned out to be some trapped gas.

Viih had been holding in her farts while hanging out with her boyfriend and ended up in the wheelchair as a result. She shared the “good news” with her followers and tagged another sufferer of a trapped gas scare, Brazilian singer Pocah.

“Like mother, like daughter. And I, at the airport, started to feel unbearable pain and I was even put in a wheelchair and it turned out to be gas (laughs). ”

“I understand you, mummy Pocah.”

Pocah, who was hospitalized with trapped gas earlier this year replied, “Get well, my daughter. Farting is serious! ”

First of all I’d like to applaud both of these ladies for their dedication to not farting in front of their boyfriends. Assuming of course this is real.

I’ve been around the internet long enough to know that people will do anything for attention, including pretending to end up in a wheelchair due to holding farts in. I mean why not sneak off and let some out in the bathroom or something?

Anyway, that’s not what’s important. What’s important is that they’ve pretending it’s real, so I’m going to pretend it’s real along with them. Thank you for your leadership in holding in your farts.

I’m handing out pretend praise and even pretending that Viih couldn’t get away with farting in front of her boyfriend. Why? Because there’s the other end of the farting spectrum that needs to tamp it down a bit.