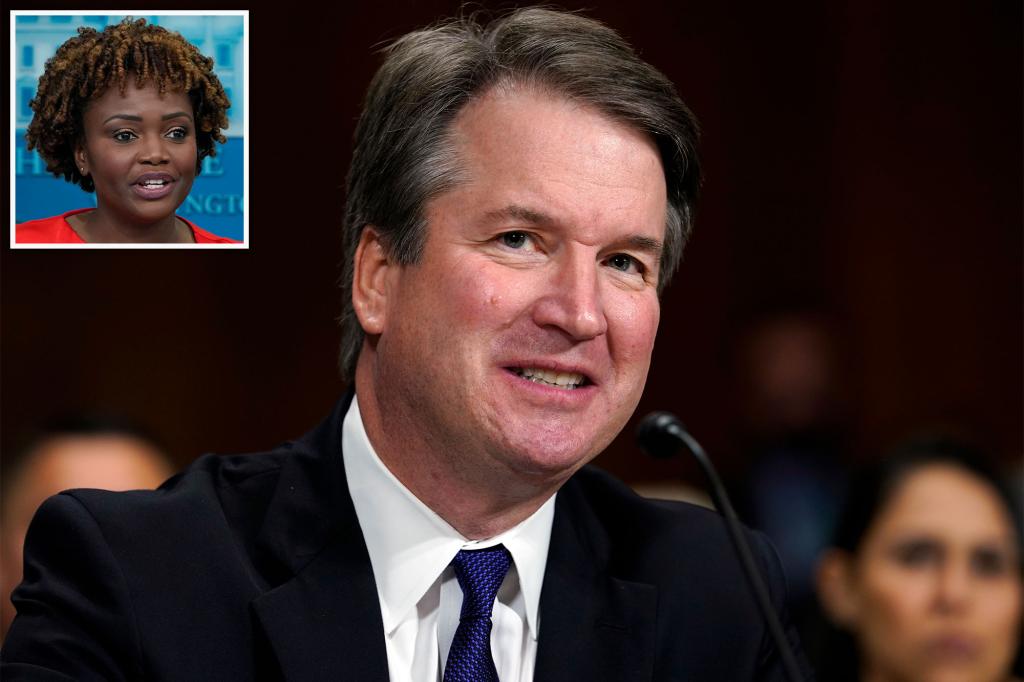 White House press secretary Karine Jean-Pierre gave the thumbs-up Friday to protesters who targeted Supreme Court Justice Brett Kavanaugh while he dined out at a Washington restaurant this week – then cut off questions about her implication with a haughty, “I’m done here. ”

“Does the president think it’s appropriate for abortion rights protesters to intimidate Supreme Court justices when they’re out to eat, like Brett Kavanaugh, who had to sneak out of a steakhouse [Wednesday] night? ” Fox News correspondent Peter Doocy asked Jean-Pierre.

“The president has been very clear that we condemn any intimidation of judges,” Jean-Pierre responded.

Later, Doocy asked: “If these protesters can go to a justice’s house and they can go to a restaurant, where is it that you do not think it’s appropriate for a group of protesters to go?”

“You asked me about intimidation,” Jean-Pierre answered. “We condemn intimidation. We condemn any violence… Peaceful protest – people should be allowed to be – to be able to do that. ”

“In a restaurant?” Doocy retorted.

“If it’s outside of a restaurant, if it’s peaceful, for sure,” the press secretary answered.

“Really?” Doocy asked incredulously, later inquiring: “Isn’t that creating a potential really bad situation when there are people – even if they’re being peaceful at the time, they’re angry. And that’s why they would be there, right? ”

“Peter, we have condemned any intimidation and violence,” said Jean-Pierre, who later signaled an end to the back-and-forth by saying, “I’m done here, Peter.”

The exchange came two days after pro-abortion demonstrators rolled up on Kavanaugh while he was eating out at Morton’s steakhouse, with some activists urging people to call the restaurant and denounce its hospitality toward justice.

Kavanaugh finished his meal before exiting through the rear door undisturbed by the protesters – whom he did not hear or see, Politico reported, citing a person familiar with the situation.

However, the chain alleged in a statement that the protesters had “harassed” the justice and other patrons.

The demonstration took place almost exactly one month after Kavanaugh was targeted by a would-be assassin who was arrested feet from the justice’s Maryland home with an arsenal that included a Glock 17 pistol, two magazines and ammunition, and a tactical knife.

The administration has repeatedly declined to condemn abortion rights protesters who have appeared outside conservative justices’ homes on a regular basis since the May publication of a leaked draft opinion overturning the 49-year-old precedent establishing the right to an abortion nationwide.

Even after the attempt on Kavanaugh’s life, Jean-Pierre told reporters: “We have not weighed in on where people should or should not protest. We have said that all Americans have the right to peacefully protest, whatever their point of view, but that attempts at intimidation and violence are totally unacceptable, and that they need to be condemned anytime they happen, regardless of who does it. ”

Meanwhile, Biden did not hesitate to lob rhetorical bombs toward the high court Friday as he signed an executive order urging his administration to help women who wish to obtain an abortion.

“The Court and its allies are committed to moving America backward with fewer rights, less autonomy, and politicians invading the most personal decisions,” the president said. “We can not allow an out of control Supreme Court, working in conjunction with extremist elements of the Republican Party, to take away freedoms and our personal autonomy.”

That rebuke came days after an extraordinary attack by Biden on the judiciary during a news conference at a NATO summit in Spain, where the president said the court’s “outrageous behavior” was having a “destabilizing” influence on America.