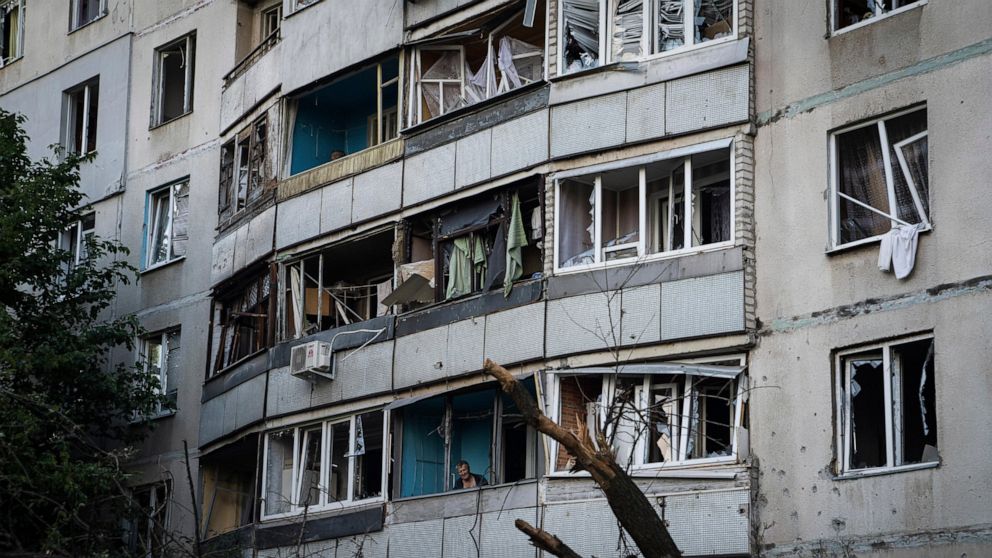 POKROVSK, Ukraine – A Ukrainian regional official warned Friday of deteriorating living conditions in a city captured by Russian forces two weeks ago, saying Sievierodonetsk is without water, power or a working sewage system while the bodies of the dead decompose in hot apartment buildings.

Gov. Serhiy Haidai said the Russians were unleashing indiscriminate artillery barrages as they try to secure their gains in eastern Ukraine’s Luhansk province. Moscow this week claimed full control of Luhansk, but the governor and other Ukrainian officials said their troops retained a small part of the province.

Luhansk has not been fully captured even though the Russians have engaged all their arsenal to achieve that goal, “Haidai told The Associated Press.” Fierce battles are going on in several villages on the region’s border. artillery to advance, leaving scorched earth. ”

Russia’s forces “strike every building that they think could be a fortified position,” he said. “They are not stopped by the fact that civilians are left there, and they die in their homes and courtyards. They keep firing. ”

Occupied Sievierodonetsk, meanwhile, “is on the verge of a humanitarian catastrophe,” the governor wrote on social media. “The Russians have completely destroyed all the critical infrastructure, and they are unable to repair anything.”

Haidai reported last week that about 8,000 residents remained in the city, which had a prewar population of 100,000. Some Ukrainian officials and soldiers said Russian forces leveled Sievierodonetsk, Luhansk province’s administrative center, before Ukraine’s troops were ordered out of the city late last month to avoid their encirclement and capture.

Luhansk is one of two provinces that make up the Donbas, Ukraine’s industrial region of mines and factories. Pro-Moscow separatists have fought Ukraine’s army in the Donbas for eight years and declared independent republics, which Russian President Vladimir Putin recognized before he sent troops into Ukraine.

After asserting full control of Luhansk, Putin said Russian forces would have a chance to rest and recoup, but other parts of eastern Ukraine have come under sustained Russian bombardment. The Russian leader warned the Ukrainian government in Kyiv that it should quickly accept Moscow’s terms or brace for the worst.

“Everybody should know that, largely speaking, we have not even started anything in earnest yet,” Putin said while speaking with leaders of the Kremlin-controlled parliament Thursday.

Ukraine’s presidential office said early Friday that at least 12 civilians were killed and 30 wounded by Russian shelling over the past 24 hours. Two cities in Donetsk – the other Donbas province – experienced the heaviest barrage, with six people killed and 21 wounded.

Commenting on Putin’s ominous statement, Kremlin spokesman Dmitry Peskov said the Russian leader was reacting to statements by Ukraine’s government and its Western allies about defeating Russia on the battlefield.

“Russia’s potential is so big that just a small part of it has been used in the special military operation,” Peskov told reporters. “And so Western statements are utterly absurd and just add to the grief of the Ukrainian people.”

Russia’s war in Ukraine, now in its fifth month, has driven millions of people from their homes, killed untold thousands and shattered European security that was arduously reconstructed after World War II. It has also rippled through the world economy by contributing to higher prices for food and fuel. Ukraine has been unable to export millions of tons of grain and other food, and Russia is facing international sanctions for its invasion.

Iryna Venediktova, Ukraine’s prosecutor general, told the AP that her country has recorded 22,000 cases so far related to alleged Russian war crimes – including rape, torture and murder – and an estimated 200 to 300 new cases are recorded each day.

“We must gather the evidence quickly,” Venediktova said, suggesting the numbers could be even higher – largely because of a lack of access to some parts of the country. “It is clear that prosecutors cannot work entirely in the Donetsk region, and the military will not allow it.”

In other developments on Friday:

– The Biden administration said it will send an additional $ 400 million in military equipment to Ukraine, including four more advanced rocket systems. A senior defense official said the weapons will bolster Ukrainian efforts to strike deeper behind Russian frontlines in the eastern Donbas region.

– Ukrainian President Volodymyr Zelenskyy traveled to the southern Dnipropetrovsk region, where he met with troops and visited a hospital where wounded soldiers were being treated. He said in his nightly video address that he went to personally express his gratitude to those defending Ukraine and also to the doctors and nurses who save the lives of wounded soldiers and civilians.

Germany’s parliament overwhelmingly approved Sweden and Finland’s requests to join NATO. German Defense Minister Christine Lambrecht said the two countries’ accession would greatly strengthen NATO’s northern and eastern flanks, noting their strong naval forces in the Baltic Sea and their land forces that know the region bordering Russia well. She suggested that Putin’s efforts to divide and destroy NATO had failed. “He bet on our weakness,” she said. “Now he gets the opposite.” All 30 member countries must agree before the Western military alliance can admit Finland and Sweden.

A court in Moscow sentenced a Russian municipal council member who had publicly criticized the war in Ukraine to seven years in prison on charges of spreading “knowingly false information” about the Russian military. Alexei Gorinov, 60, criticized Russia’s military actions in Ukraine at a March meeting. A legal aid group said he is the first person ordered to serve prison time under a law that makes it illegal to disparage the Russian military. Russia’s parliament rubber-stamped the law, which carries a maximum prison term of 15 years, a week after the Kremlin sent troops into Ukraine.

– The British Defense Ministry said Ukrainian forces have made advances near the Russian-occupied southern city of Kherson. Meanwhile, the Washington-based Institute for the Study of War said Ukrainian partisans blew up a railroad bridge 25 kilometers (15 miles) north of Melitopol, which is to the east of Kherson, on Thursday to disrupt Russian resupply operations.

– On the energy front, the leaders of Greece and Bulgaria inaugurated a new pipeline that will supply natural gas from Azerbaijan to Bulgaria, whose vital supply of Russian gas was cut off in April. And in Germany, energy supply giant Uniper said it is asking the government for a bailout during a growing natural gas crunch due to the war in Ukraine.

Murru reported from Kyiv, Ukraine. Cara Anna in Kyiv, Ukraine, Lolita C. Baldor in Washington and Associated Press journalists from around Europe contributed to this report.