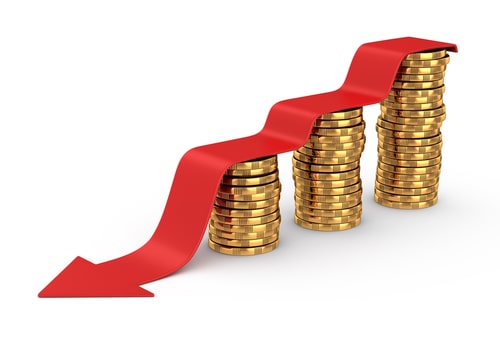 (Kitco News) After shedding $ 60 this week, gold remains vulnerable to an even bigger selloff as markets get ready for another aggressive hike by the Federal Reserve at the July meeting. But analysts point to a potential price bottom that will trigger a momentum turnaround for the precious metal.

The gold market is getting hurt by a strong US dollar index, which is taking on a lot of the safe-haven interest amid rising recession fears.

“Gold has tumbled to levels last seen in September 2021 and is technically trading in oversold territory,” said Standard Chartered precious metals analyst Suki Cooper said Friday. “While gold has been caught between elevated inflation risks and growing concerns over a recession, it has reverted to taking its cue from the USD, which has benefited from safe-haven flows over gold.”

On top of that, Friday’s jobs data beat expectations, with the US economy adding 372,000 positions in June. The upbeat number has reassured the markets that the Fed will proceed with another 75-basis-point hike at the July meeting in just over two weeks. The CME FedWatch Tool shows a 95.4% chance of a 75bps and a 4.6% chance of a 100bps increase in July.

“Today’s report simply means the Fed still has more work to do with regards to policy rates to cool demand in the economy, and a 75 basis point rate hike is almost a certainty at this point. What matters from here for investors is not how quickly the Fed hikes rates, but how high they have to go in order to slow the economy, “said Allianz Investment Management senior investment strategist Charlie Ripley.

Analysts see more downside risk for gold, noting that prices could test $ 1,700 and potentially even $ 1,650. However, that low will likely serve as the bottom in prices, with investors coming back into the metal at those levels, OANDA senior market analyst Edward Moya told Kitco News.

Cooper is watching $ 1,690 an ounce, highlighting this level as gold’s “weaker price floor.” She also described the July period as a seasonally slow period for demand. “Gold has a safe-haven premium for now, but it has been significantly eroded; we expect gold to keep taking cues from macro drivers. Thus, prices could test lower later in the year, but concerns about inflation should limit the downside,” Cooper said.

The gold narrative is primarily driven by how the market is pricing in the Federal Reserve rate hikes, according to analysts.

“This week’s initial move lower was purely a reaction to what happened in the Treasury market as yields were further priced in more tightening by the Fed,” Moya explained. “We are starting to see Wall Street getting close to fully pricing in all of the Fed’s tightening.”

But once markets get beyond this July Fed meeting, the macro environment will start looking up for gold. And next week’s US inflation report will help with that, said Moya.

“The expectation is that the inflation report will cement a 75bps increase later in the month. And once that happens, gold is going to be done with the major weakness from Fed tightening expectations,” he said.

One hiccup could be technical selling pressure, which is why it is important to watch what gold does at the $ 1,726 an ounce level. “Once tightening is agreed upon and markets believe it is fully priced in, gold will stabilize,” Moya added.

The one dataset to watch closely next week is June’s inflation report, with market expectations looking for the US annual headline number to accelerate to 8.7% from May’s 8.6% pace.

“While there are many signs that inflation has peaked, it, unfortunately, will not roll over and the word ‘plateau’ is more appropriate… I see the market as more sensitive to headline inflation, and the risk is that this comes in just above consensus, “said Pepperstone’s head of research Chris Weston. “A big CPI number should solidify expectations of a 75bp hike from the Fed in the July 27 FOMC meeting. The market is pricing that firmly and another 50bp in September.”

The inflation argument calling another good decade for tech investing