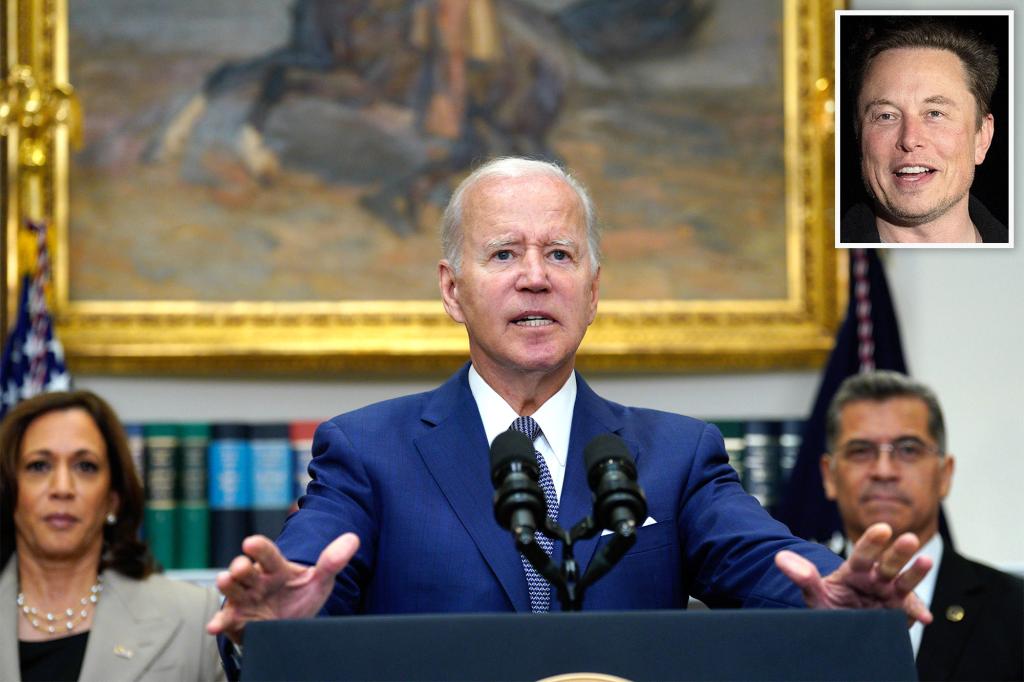 President Biden made a televised blunder Friday that could have been pulled straight from the classic Will Ferrell comedy “Anchorman” – when he appeared to blurt out “repeat the line” while reading a speech directly from a teleprompter.

Critics took that as the president accidentally reading aloud a stage direction as he tried to give a White House speech rallying fellow Democrats to come out and vote in the wake of the Supreme Court overturning Roe V. Wade.

The apparent mistake led to a firestorm of mockery online – which was led by Tesla CEO Elon Musk, who tweeted: “Whoever controls the teleprompter is the real President!”

The billionaire also shared a meme of the “Anchorman” character Ron Burgundy, who was known for making blunders like saying “Go f – k yourself, San Diego” when it was scrolled on the prompter as a gag and who in one scene reads the line, “I’m Ron Burgundy? ” as a question because someone accidentally put a question mark on the feed.

After the apparent error, the White House went into damage control mode – something that happens more and more frequently when Biden speaks – denying it ever happened and claiming Biden had actually said, “Let me repeat the line.”

Video of the speech shows Biden apparently having trouble getting through the address, as he trails off at points and corrects himself when he quotes SCOTUS ‘conservative majority opinion on the case that overturned Roe v. Wade.

“‘Women are not without electoral or political power,'” Biden said. “‘It is noteworthy that the percentage of women who register to vote and cast a ballot is consistently higher than the percentage of men who do so’ – end of quote.”

“Repeat the line,” he then says, the video shows. “‘Women are not without electoral and / or political or.'”

He trails off, then corrects himself, saying, “Let me be precise –not and / or – ‘or political power.'”

“That’s another way of saying that you, the women of America, can determine the outcome of this issue,” Biden says.

User Greg Price circulated the clip on Twitter, saying, “Joe Biden accidentally reads the part on the teleprompter that says ‘repeat the line’ when they wanted him to say the line again lmfao.”

That sparked White House Assistant Press Secretary Emilie Simons to reply, “No. He said, ‘let me repeat that line.’

The White House transcript of Biden’s remarks says, “Let me repeat the line” and some dismissed the claim it wasn’t supposed to have been spoken.

Musk, who has previously taken jabs at Biden for teleprompter snafus, also went after the president with another “Anchorman” -themed meme showing a scene with a producer in a control room warning, “For the last time, anything you put on that prompter, Burgundy will read.”