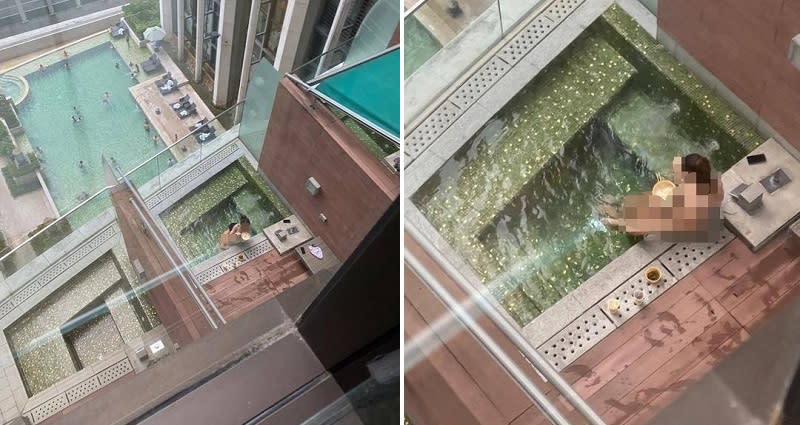 Two viral videos showing a couple having sex in their private outdoor jacuzzi in a Hong Kong hotel have ignited privacy concerns among social media users.

The videos, which were reportedly shared on Facebook and WhatsApp groups several days ago, show a couple having sex in their private outdoor jacuzzi as another person films them from above.

It is unclear when or where the videos were taken. Some social media users believe it was filmed by another guest or an employee at a hotel in North Point that offers rooms with a private jacuzzi on the balcony.

More from NextShark: ‘It came out of nowhere’: ‘The Boys’ star Karen Fukuhara says she was victim of hate crime attack

In one of the viral videos, the woman is seen sitting on the edge of the jacuzzi while eating a bowl of noodles with her partner’s head between her legs. The other video shows the man hugging the partially naked woman from behind.

The person behind the camera managed to film the couple through the gap of a balcony railing.

More from NextShark: Portland man charged with hate crimes for punching 5-year-old and her father because they’re ‘Japanese’

Some social media users raised concerns about the hotel’s design, pointing out that those staying on the floors below will not have any privacy from other guests on the upper floors. Others, however, called out the person filming the couple.

“It’s so cheap to secretly film them, ”one user wrote.

More from NextShark: Shanghai nursing home resident taken to morgue in body bag is found to still be alive

“Have you thought of the harm you’ll bring to those involved, ”another said.

According to Hong Kong mediaunder the law, anyone found exposing themselves in public could face a fine of 1,000 Hong Kong dollars (approximately $ 127) and a six-month jail sentence.

More from NextShark: Chinese student who placed fluorescent light in her hair to study during power outage goes viral

Publishing a video showing indecent acts online, such as the case of the person who filmed the couple, is a violation of Hong Kong’s “Control of Obscene and Indecent Articles Ordinance,” which carries a fine of up to 1 million Hong Kong dollars (approximately $ 127,421) and three-years’ imprisonment.