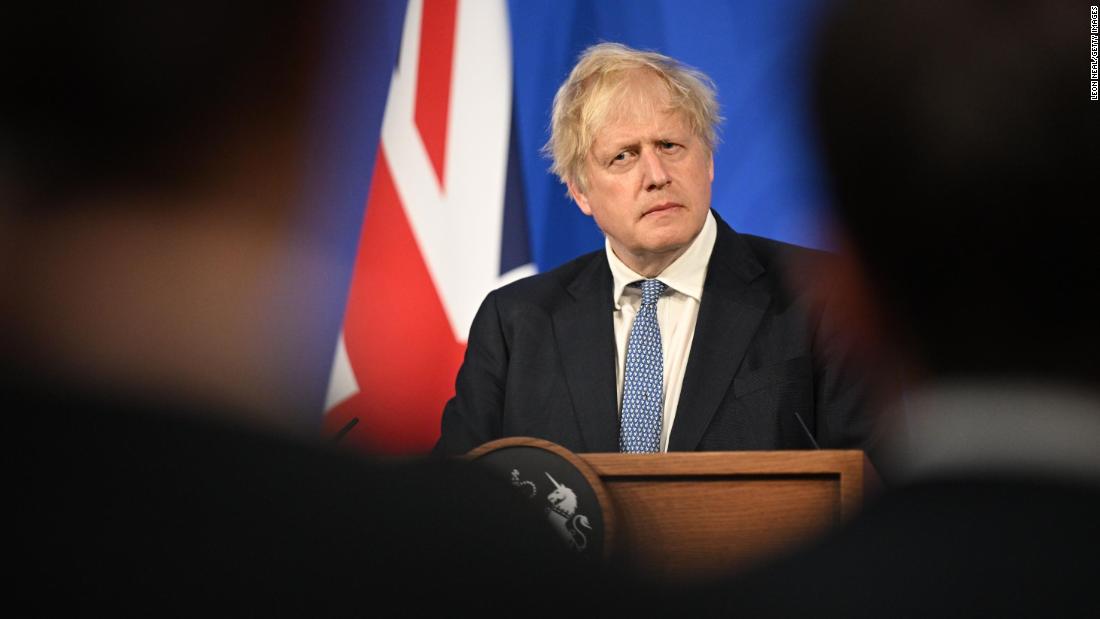 “It is clearly now the will of the parliamentary Conservative Party that there should be a new leader of that party and therefore, a new prime minister,” Johnson said.

“The process of choosing that new leader should begin now,” he added, saying the time line will be announced next week.

Johnson is not planning to leave office immediately, however. “I have today appointed a cabinet to serve, as I will, until a new leader is in place,” he said, in a televised speech outside 10 Downing Street. Appointing new cabinet ministers means that the government can continue to function as he prepares to depart.

Johnson spoke of his attempts to stay on as leader and how “painful” it is for him to step down, but made no mention of the scandals that have proved his political downfall.

“In the last few days, I’ve tried to persuade my colleagues that it would be eccentric to change governments when we’re delivering so much … and when the economic scene is so difficult domestically and internationally,” Johnson said.

“I regret not to have been successful in those arguments, and of course, it’s painful, not to be able to see through so many ideas and projects myself,” he said, adding that he’s proud of “getting Brexit done” and “leading the West in standing up to Putin’s aggression in Ukraine. “

Johnson went on to address voters directly, and expressed his sadness at stepping down after nearly three years in the role.

“To you, the British public: I know that there will be many people who are relieved and, perhaps, quite a few will also be disappointed,” he said. “And I want you to know how sad I am to be giving up the best job in the world, but them’s the breaks.”

Johnson has in recent months been engulfed in a series of scandals that forced even his most stalwart supporters to abandon him.
Nearly 60 government officials – including five cabinet ministers – have resigned since Tuesday, furious about the botched handling of the resignation by Johnson’s former deputy chief whip, Chris Pincher, who was accused of groping two men last week.

Johnson initially attempted to ride out the crisis – despite an unprecedented flight of middle-ranking ministers from the government, a battering at Prime Minister’s Questions and a bruising appearance before a committee of senior lawmakers in Parliament. On Wednesday, he still insisted he wasn’t going to resign.

But Johnson finally gave in Thursday after some of his most loyal allies told him that the game was up.

UK Foreign Secretary Liz Truss said Johnson had made the “right decision” to resign. “We need calmness and unity now and to keep governing while a new leader is found,” she added.

Greg Clark, newly appointed UK Secretary of State for Leveling Up, Housing and Communities, said he had a “duty to ensure that the country has a functioning government.”

The leader of the opposition Labor Party, Keir Starmer, said it was “good news for the country” that Johnson had decided to resign, adding that “it should have happened long ago.”

“He was always unfit for office. He has been responsible for lies, scandal and fraud on an industrial scale,” said Starmer on Twitter.

“Enough is enough. We do not need to change the Tory at the top – we need a proper change of government. We need a fresh start for Britain.”

While Johnson has announced his resignation as Conservative Party leader, it is possible that he will remain as prime minister for some weeks or even months.

Conventionally, when a Conservative leader resigns, he or she gives the party time to hold a thorough leadership contest, in which Conservative lawmakers and then party members nationwide vote.

But some said Johnson should leave office more quickly.

“We now need a new Leader as soon as practicable,” Business and Energy Secretary Kwasi Kwarteng said on Twitter. “Someone who can rebuild trust, heal the country, and set out a new, sensible and consistent economic approach to helping families,” he added.

“There will be a widespread sense of relief that the chaos of the last few days (indeed months) will come to an end, though notion of Boris Johnson staying on as PM until autumn seems far from ideal, and surely not sustainable?” Sturgeon said in a series of tweets.

Baker said Deputy Prime Minister Dominic Raab should be caretaker prime minister, but that Johnson could also continue in office.

“I’m absolutely determined that we should not prolong this crisis. If it’s agreed within government that Boris Johnson should continue as caretaker, then that’s fine with me,” Baker told CNN. “Because we need to just end the crisis, get into a leadership contest, and start fresh in September.”

Former British Prime Minister John Major said it would be “unwise and may be unsustainable” for Johnson to remain in the office of prime minister for long while a new Conservative leader is chosen.

Johnson’s departure will mark a remarkable downfall for a prime minister who was once seen as having political superpowers, with an appeal that transcended traditional party lines.

He won a landslide victory in December 2019 on the promise of delivering a Brexit deal and leading the UK to a bright future outside the European Union. But his premiership unraveled in the aftermath of the Covid-19 pandemic.

In recent months the prime minister has faced a barrage of criticism from all sides over his conduct and that of some members of his government, including illegal, Covid-19 lockdown-breaking parties thrown into his Downing Street offices for which he and others were fined .

Numerous other scandals have also hit his standing in the polls. These include accusations of using donor money inappropriately to pay for a refurbishment of his Downing Street home and ordering MPs to vote in such a way that would protect a colleague who had breached lobbying rules.

Last month, he survived a confidence vote among members of his own party, but the final count of his lawmakers who rebelled against him was higher than his supporters expected: 41% of his own parliamentary party refused to back him.

He suffered a further blow late last month when his party lost two parliamentary by-elections in a single night, raising new questions about his leadership.

His reputation was also dented by the resignation of his second ethics adviser in less than two years.

CNN’s Lauren Kent and Sugam Pokharel contributed to this report.