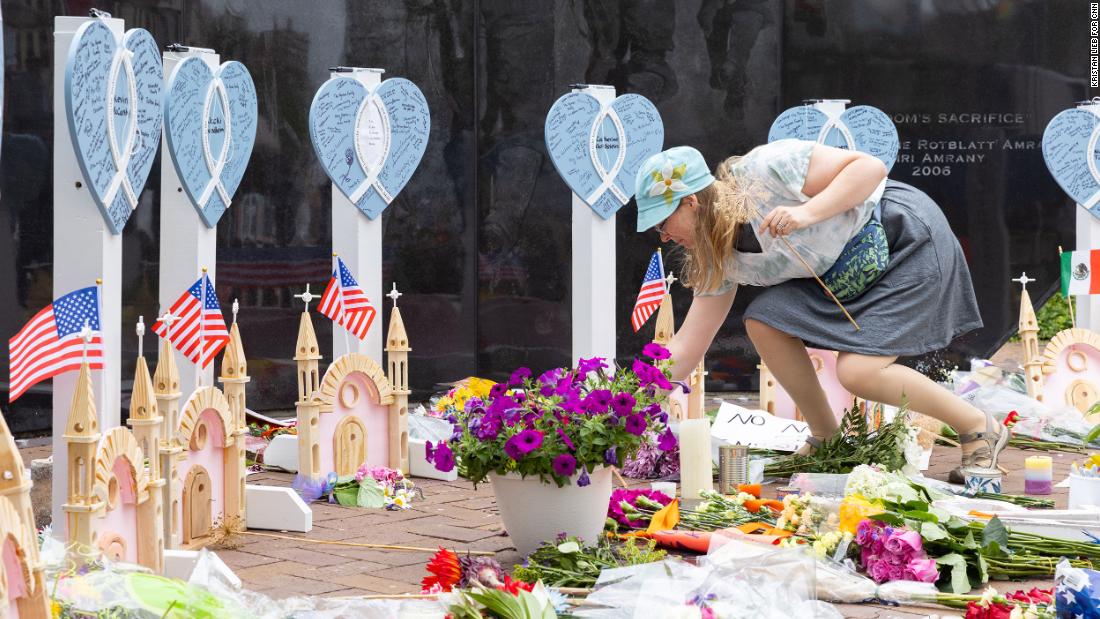 The incident has focused attention on – and renewed questions over – access to firearms in the United States under existing law and screening processes in order to prevent gun violence.

The shooting also raised questions about what proposed policies or existing law could have prevented this latest high-profile incident of gun violence.

Robert “Bobby” E. Crimo III, 21, faces seven charges of first-degree murder in connection with the shooting, which authorities said he allegedly carried out by climbing onto the rooftop of a nearby business and opening fire minutes after the parade started, sending paradegoers and participants running for safety.
State police confirmed Tuesday that Crimo passed four background checks between June 2020 and September 2021 when purchasing firearms, which included checks from the federal National Instant Criminal Background Check System.

Highland Park Mayor Nancy Rotering told CNN’s Anderson Cooper she is “looking forward to an explanation” of how Crimo was able to obtain guns.

“We know that in other countries people suffer from mental illness, they suffer from anger, maybe they play violent video games, but they can not get their hands on these weapons of war and they can not bring this kind of carnage to their hometowns, “Rotering said. “This has to stop.”

Crimo is believed by authorities to have planned the attack for weeks, and the rifle he used and another he allegedly had when he was arrested by police appear to have been purchased legally in Illinois, Lake County Major Crime Task Force spokesman Chris Covelli said. Other guns were recovered from his home in nearby Highwood.

To buy guns in Illinois, people need a Firearm Owners Identification (FOID) card. Crimo was under 21, so he was sponsored by his father, state police said. Crimo’s application was not denied as there was “insufficient basis to establish a clear and present danger” at the time, according to officials.

The only offense included in Crimo’s history was a January 2016 ordinance violation for possession of tobacco, police said, which occurred when he was a juvenile.

Gun laws in the United States have generally been “written to facilitate commerce as much as protect public safety,” Daniel Webster, a co-director of the Johns Hopkins Center for Gun Violence Solutions, said in an interview.

“Our laws are tilted towards the default of, ‘let somebody get a gun,’ as opposed to, ‘let’s have a deliberative process’ before you get a lethal weapon.”

Under the existing background check system, federally licensed gun dealers must run checks on every buyer. Buyers can then be barred from purchasing a firearm due to a variety of factors, including criminal history such as a conviction for a felony criminal offense or a determination made through an adjudication process that an individual poses a threat to themselves or others due to mental status .

A buyer attempting to purchase a firearm from a federally licensed dealer must present a government-issued ID to the seller and fill out a form designed to screen for any potentially disqualifying factors, which would legally prohibit the person from purchasing or possessing a firearm. The seller typically would then submit the information to the FBI so that the agency can check the applicant’s information against databases. The process can take as little as a few minutes.

Congress recently passed legislation known as the Bipartisan Safer Communities Act, which amounts to the first major federal gun safety legislation in decades. The bill, which has been signed into law by President Joe Biden, makes significant changes to gun policy in the United States, including provisions that will affect firearm sales.

In one key change, the bill requires individuals who sell firearms for profit – who have previously evaded registering as federally licensed firearms dealers – to be licensed.

“There are individuals who sell a lot of guns and do so as a private, unlicensed seller and it is clear that they are doing this for a profit … that will give the (Bureau of Alcohol, Tobacco, Firearms and Explosives) the ability to prosecute people who are selling a lot of guns without a license and it will force more of those individuals to get a license and therefore have to complete background checks for any gun sale, “said Webster of the Center for Gun Violence Solutions.

“That’s really significant because we’re talking about a fair number of guns that are now going to be subject to background checks or they simply will not be sold.”

This bill also closes a years-old loophole in domestic violence law – the so-called boyfriend loophole – which barred individuals who have been convicted of domestic violence crimes against spouses, partners with whom they share children or partners with whom they cohabitated from having guns. Old statutes did not include intimate partners who may not live together, be married or share children. Now the law will bar from having a gun anyone who is convicted of a domestic violence crime against someone they have a “continuing serious relationship of a romantic or intimate nature.”

Additionally, the bill encourages states to include juvenile records in the National Instant Criminal Background Check System with grants as well as implements a new protocol for checking those records.

How the vetting process for gun purchases could be stronger

Despite the implementation of the new bipartisan law, there are still ways in which buyers can slip through the cracks of the existing system and ways the federal system could be made more comprehensive.

“To me, I think that’s a huge problem, and a lot of people were hoping they would fix that,” Webster said.

In addition, while some states have implemented a licensing requirement for handgun purchasers, there is no equivalent federal licensing mandate for buyers, which could set up a more rigorous vetting process undertaken by law enforcement agents, as opposed to gun sellers.

“What we have found in our research is that while comprehensive background checks are good and necessary for the system to work, to really have more impact from your regulatory process, you need a licensing system,” Webster said. “We find that the licensing system is far more effective in reducing homicides, suicides, mass shootings and even shootings involving law enforcement officers. It also prevents trafficking as well.”

Webster added, “We’re really the only high-income Western democracy that does not have a licensing system for firearm purchasers – only the United States.”