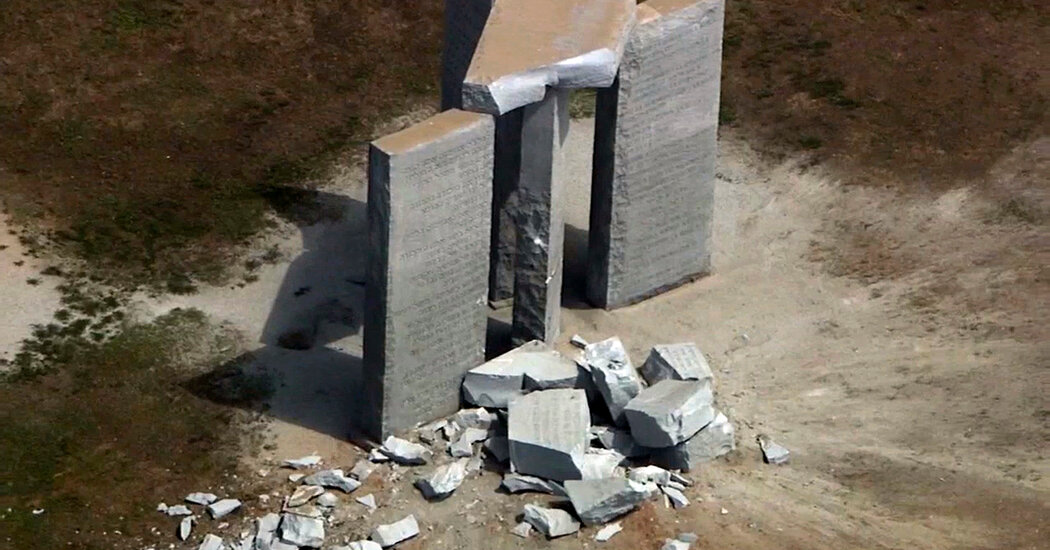 An explosive device that “unknown individuals” detonated early Wednesday destroyed a granite monument in Georgia that was built under mysterious circumstances more than four decades ago and promoted by state officials as “America’s Stonehenge,” the authorities said.

The monument, known as the Georgia Guidestones, which was built about nine miles north of Elberton, Ga., Had four granite slabs connected to a center pillar, with a capstone on top.

But at around 4 a.m. on Wednesday, an explosive device was set off, destroying “a large portion of the structure,” the Georgia Bureau of Investigation said in a statement. It is investigating the explosion together with the Elbert County Sheriff’s Office.

On Wednesday evening, the Georgia Bureau of Investigation released surveillance video that captured the explosion, which flung chunks of the monument outward and dispersed dust into the air. Shortly afterwards, a car can be seen in the footage leaving the scene, according to the agency.

It said that “for safety reasons,” the remaining pillars had been “completely demolished.”

For more than four decades, the Guidestones have towered over a field, fascinating and confounding many visitors. It is unclear why the 19-foot granite slabs were there, or what they meant, and only one man claimed to know the identity of the benefactor who paid for them.

The man, Wyatt Martin, claimed that another man who went by the name RC Christian had paid for the granite slabs in 1979, after visiting the East Georgia city.

“I made an oath to that man, and I can not break that,” Mr. Martin, who helped broker the arrangement for the monument, told The New York Times in 2013. He added, “No one will ever know.”

The granite slabs, the department says on its website, display “a 10-part message espousing the conservation of mankind and future generations in 12 languages.” It also serves as an astronomical calendar: Every day at noon the sun shines through a narrow hole in the structure, illuminating the day’s date.

Despite the Guidestones’ mysterious aura, some local residents have said that they have little interest in them. Some conspiracy theorists have claimed that the stones’ edicts – which include a call to “unite humanity with a living new language” and a recommendation to keep the planet’s population below 500 million – stand for an elite plot to depopulate the globe.

“They built this monument calling for forced depopulation of the planet,” Alex Jones, the far-right broadcaster and conspiracy theorist, said in a video in 2020.

In a post to TwitterKandiss Taylor, a Republican candidate for governor of Georgia, appeared to welcome the partial destruction of the monument, which she described as the “Satanic Guidestones.”

Mart Clamp, a local businessman who helped his father engrave the Guidestones when they were first erected, said he was “heartbroken” about the damage caused by the explosion.

“People were always coming up with some kind of crazy whackadoodle story about them,” he said of those who pushed conspiracy theories about the slabs.

“It’s unfortunate that we live in a society that thinks that tearing down things that you disagree with is acceptable,” Mr. Clamp added. “I’m at a loss for words right now.”

He said that many local businesses in the area, including his own, which engraves stone, had offered their time and resources to restore the structure.

“If we’re allowed to,” Mr. Clamp added, “we’re going to rebuild them.”