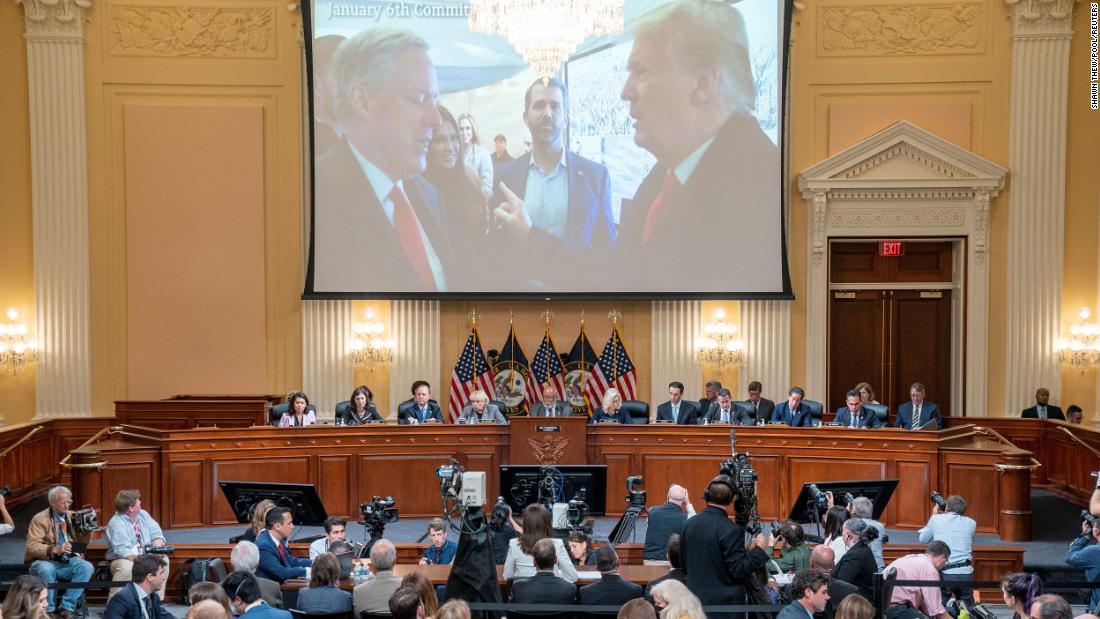 The hearing is set to start at 10 am ET. The committee has not yet announced any witnesses.

While the committee did not announce the hearing’s topic in its notice, Democratic Rep. Adam Schiff of California, a member of the committee, had previously told CBS ‘”Face the Nation” over the past weekend that the next hearing will focus on “efforts to assemble that mob on the mall” and connections between the Trump White House and various extremist groups at the rally that preceded the attack on the US Capitol, including the Proud Boys, Three Percenters and others.

The announcement comes a week after blockbuster testimony before the committee from former White House aide Cassidy Hutchinson, who recalled being told of Trump’s anger when informed by his Secret Service detail he could not go to the Capitol on January 6. Hutchinson, who was an aide to then-Trump chief of staff Mark Meadows, also testified that Trump and Meadows were informed that January 6 rally attendees were armed.

After Hutchinson’s testimony, Sarah Matthews, who served as deputy press secretary in the Trump White House until resigning shortly after the January 6 attack, tweeted that “anyone downplaying Cassidy Hutchinson’s role or her access in the West Wing either does not understand how the Trump [White House] worked or is attempting to discredit her because they’re scared of how damning this testimony is. “

Matthews has been subpoenaed by committee and has agreed to testify at an upcoming hearing, according to two sources with knowledge of the investigation. The former White House aide has been subpoenaed to testify at a public hearing as early as next week, sources tell CNN.
Over the weekend, Illinois Rep. Adam Kinzinger, a Republican serving on the committee, told CNN’s Dana Bash that Hutchinson’s testimony had “been inspiring for a lot of people,” and that more witnesses have come forward since her revelations last week, adding, “There will be way more information – and stay tuned, “without elaborating further.

Kinzinger said on “State of the Union” that he did not want to “get into who or any of those details” about potential new witnesses, but noted that “every day we get new people that come forward” to the committee.

This story has been updated with additional developments Tuesday.