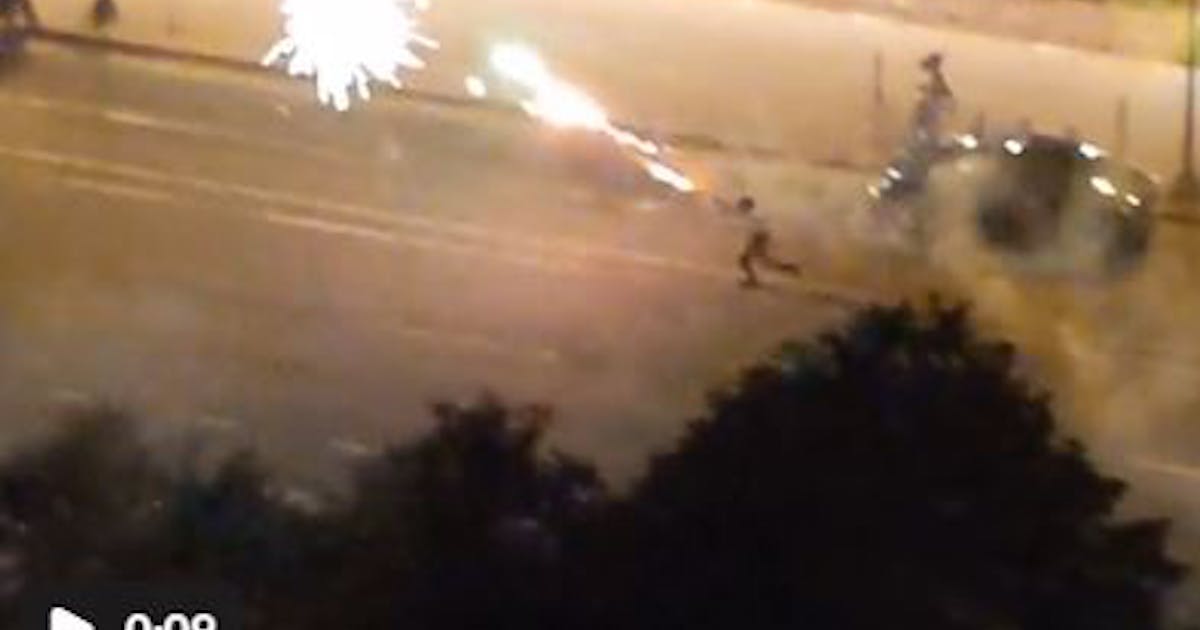 At least one person was jailed and another injured after passengers in vehicles shot fireworks at buildings and people for hours early Tuesday in a densely populated area of ​​downtown Minneapolis.

A police officer was injured, and a woman was jailed in connection with the mayhem near 2nd Street and Portland avenues, where there are numerous residential buildings, according to a police report.

Also during the overnight hours, a similar incident played out about 3 miles to the northeast, where people were aiming fireworks at buildings as street racers were doing donuts while spectators stood close enough to put their well-being at risk, according to a nearby resident who recorded some of the behavior.

Nearly a half-day later, Minneapolis police leadership has yet to comment or disclose further details about the chaos downtown or in the northeast.

Officers responded in an effort “to clear the area of ​​parties who had been on-site for hours shooting fireworks at pedestrians, apartments, vehicles and businesses,” the report read.

“There had also been reports of gunfire and violent crimes being committed,” the report continued, without offering specifics.

Police dispersed the people involved and booked a 23-year-old woman from Savage into jail about 2:30 am, where she awaits charges on suspicion of assaulting an officer and obstructing police. The Star Tribune generally does not identify suspects before they are charged.

The officer subjected to the assault suffered an “apparent minor injury,” the report noted.

“It seemed like 2nd Street looking toward Portland was ground zero,” said Star Tribune news editor Paul Klauda, ​​who lives close to where the long-running mayhem occurred and estimated it began around 10:30 pm Monday.

There were “kids running around, driving around, shooting fireworks toward cars, buildings, people,” Klauda said, “cars racing down 2nd Street in either direction, turning around, kids hanging out of them, firing fireworks.”

Klauda said “the booms echoed off the buildings, giving it a surreal vibe. At times, kids would … get in and out of cars, sometimes appearing to be re-arming themselves with fireworks. One of the first times cops showed up – without much presence, so it did little to alter the night – someone sent a firework at the squad car. “

Police arrived on three occasions, but “things started back up after they left” the first two times, he said.

Video (00:58): Stinson Boulevard was the scene of drivers doing donuts as spectators stood nearby. Others in the vicinity were setting off fireworks, aiming them at buildings. [Video by Karyn Entzion]

In northeast Minneapolis, condo resident Karyn Entzion said people among a crowd of 150 or so shot fireworks at her as she recorded video from her second-floor balcony as cars spun wildly and squealed their tires.

“They were shooting them intentionally onto the roof of my building,” said Entzion, who lives in the 700 block of NE. Stinson Boulevard. “I had to run. And these were not small fireworks. They were huge rocket-like launcher fireworks.”

She said fireworks were being shot from the rooftops of at least commercial buildings and a three-story parking ramp.

Entzion said the area surrounding her condo has been plagued by street racing and vehicles doing donuts for the better part of a year.

“Yes, it’s about damage to property,” she said. “But the way in which they are driving, they have become increasingly bold.

“Someone is going to get seriously injured. People are standing very close to the cars, and people are hanging out of the cars. All it takes is one little mistake. They are absolutely touching the cars.”

Minneapolis Downtown Council President Steve Cramer, commenting in reference to the incidents downtown, in northeast and the late-night shooting on Boom Island late at night that wounded eight people, said, “The chaos was unacceptable. Restoring order is the first responsibility, and the resources just weren’t there last night. It reflects our challenge in a city with a depleted police department. “

Cramer, who in his role of representing downtown’s business interests, has long advocated for bolstering police staffing in Minneapolis. He said recent events offer further proof that city leaders need to have the ability to quickly call upon other agencies – such as the State Patrol and Hennepin County Sheriff’s Office – to help quell violence when it bubbles up.

If dangerous behavior is left unchecked, Cramer continued, it will continue to erode the sense of safety of downtown residents and guests. “It’s certainly not the image when want to portray to our region,” he said.