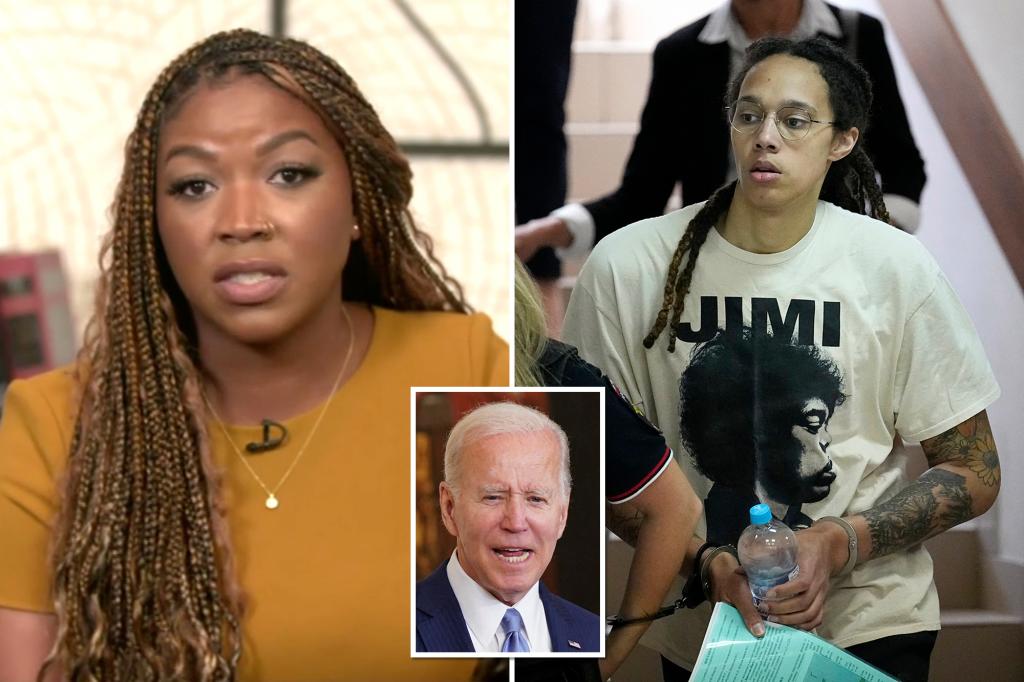 Britney Griner’s wife said it was “very disheartening” that she still has not heard directly from President Biden, even after the WNBA star – who’s been languishing in a Russian jail – sent a handwritten letter to the president, begging him not to “forget” here.

Cherelle Griner appeared remotely on “CBS Mornings” on Tuesday, telling host Gayle King that she has decided to “not be quiet anymore” about her wife’s plight because the Biden administration so far has been unable to bring her home.

“I will find that balance of harm versus help in pushing our government to do everything that’s possible because being quiet, they’re not moving, they’re not doing anything,” Cherelle Griner argued.

Brittney Griner, 31, was arrested at an airport in Moscow in February for allegedly transporting in her luggage two cannabis vape cartridges, which are illegal in Russia.

On Friday, her criminal trial got under way in the Khimki City Court, where prosecutors outlined their case against the basketball player, accusing her of large-scale transportation of drugs, which is punishable by up to 10 years in prison.

On the Fourth of July, Griner penned a letter to Biden from behind bars, telling the president: “I’m terrified I might be here forever.”

White House press secretary Karine Jean-Pierre confirmed to reporters on Tuesday that the president has received and read the letter before calling Griner’s release “a priority” for the administration. She did not reveal whether Biden intended to respond.

“As you have heard us say before, he believes that any US national that is held abroad or detained or held hostage abroad, we need to bring back safely and we are going to use every tool that you possibly can to make that happen,” Jean-Pierre said. “Again, this is a priority for the President.”

The press secretary added that Cherelle Griner had spoken with national security adviser Jake Sullivan twice in the past ten days.

“I do not have anything else to read out as far as a potential call or meeting with her family, but clearly we believe she is wrongfully detained,” Jean-Pierre said.

Cherelle Griner said during the CBS interview that when she read her wife’s missive, she could sense her fear.

“She’s probably the strongest person that I know, so she does not say words like that lightly,” she said. “That means she truly is terrified that she may never see us again.”

Cherelle speculated that Brittney – the proud daughter of a Vietnam War veteran – decided to address the president directly on Independence Day because her family so far has failed to contact him.

“I’m sure she is like, ‘I’m going to write him and ask now because my family has tried to no avail, so I’m going to do it myself,'” said Cherelle.

The athlete’s wife of three years also revealed that in a recent conversation with Brittney, she raised the topic of her mental health, after seeing an unsettling photo of her looking wild-eyed while arriving in court.

“I honestly wrote her and was like, ‘Hey, honey, you know, I saw a picture of you, and I know there’s such a thing as propaganda, but I have to ask… are you okay?’ Cherelle recalled inquiring. “’Are you insane at this point? Understand that if you are, I still love you and when you come back, we will love you back whole, show yourself grace. ‘”

Cherelle said Brittney explained to her that she felt “very weak” at that moment, and that she was “startled” when she turned a corner at the courthouse and came face to face with hundreds of reporters. But the WNBA player assured her wife that she was “not insane, not yet.”

The US government has alleged that Griner’s detention is a political ploy by the Kremlin, an accusation that President Vladimir Putin’s spokesperson Dmitry Peskov rejected Friday.

“It can not be politically motivated,” Peskov told the state news agency TASS. “[The] facts are that a famous athlete was apprehended with forbidden compounds that contained narcotic substances. Russian legislation indeed has provisions that stipulate punishment for such crimes. ”

Meanwhile, Russian news media have repeatedly raised speculation that Griner could be swapped for Russian arms trader Viktor Bout, nicknamed “The Merchant of Death,” who is serving a 25-year sentence on conviction of conspiracy to kill US citizens and providing aid to a terrorist organization.

At the White House Tuesday, Jean-Pierre declined to say whether such an agreement could be reached with Moscow.

“I can not speak to any discussions that are happening on how any US nationals being held abroad and wrongfully detained, how, what the process is going to be,” the press secretary said. “I just can not speak to that.”

Griner’s drug trial is scheduled to resume in Russia on Thursday.