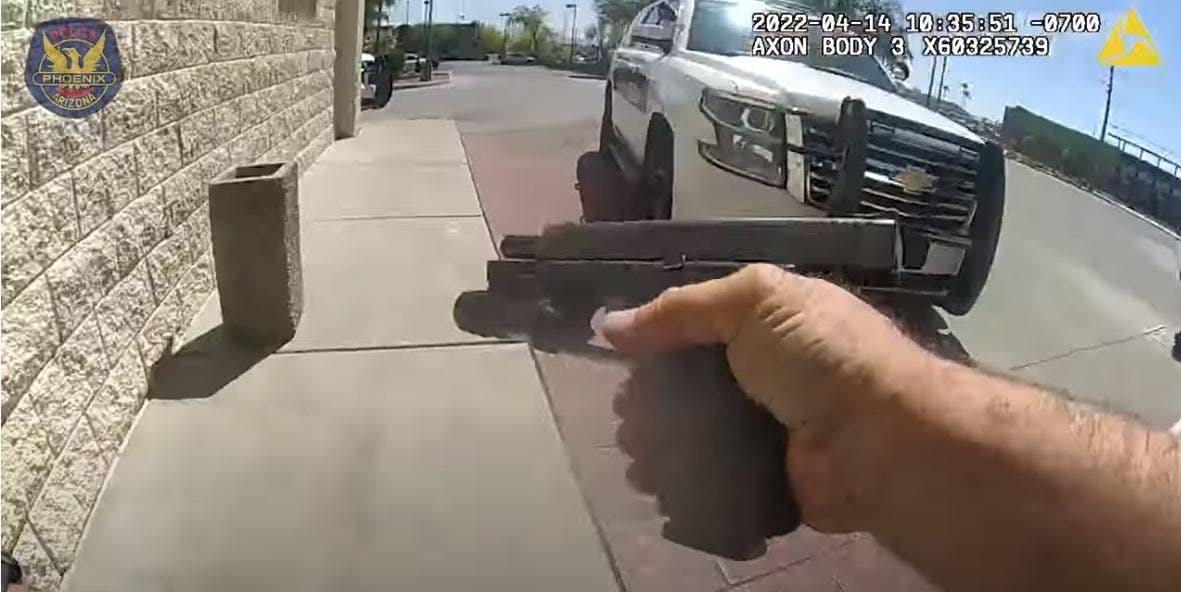 The Phoenix Police Department has released jaw-dropping bodycam footage of an April 14 shooting that left a 40-year-old female officer injured.

The shooting took place at a gas station near Cave Creek and Beardsley Road. Police officers responded to a domestic violence call and met a woman there, because she told them she was uncomfortable meeting police at her home.

In a 911 phone call released by police, the woman tells officers her boyfriend, 35-year-old Nicholas Cowan, was suicidal and acting erratically. She feared there would be a violent confrontation if the officers showed up to where they were.

In the bodycam footage, the officers can be seen interviewing a woman when a blue Prius pulls up. The female officer, identified as Denise Bruce-Jones, approaches the car and is fired upon, falling backward. Off to the side, her partner returns fire at the Prius as it speeds away. Shots can be seen hitting the walls and windows of the convenience store.

The shooting suspect, later identified as 35-year-old Nicholas Cowan, evaded authorities for several days. He was arrested in Scottsdale, following a barricade situation on April 17.

On Thursday, police announced the arrest of 41-year-old Michael Hankins for allegedly helping Cowan while he was on the run.

Police said in a probable-cause statement that Hankins allowed Cowan to stay at his apartment for two nights before renting a Scottsdale residence for the wanted man.

It was not immediately clear whether Hankins had an attorney who could comment on his behalf.

Police said Thursday that a woman was also arrested Wednesday in the case, but a Maricopa County Superior Court spokesman said Thursday the court did not have records on charges against that person.

Fox News’ Adam Sabes and The Associated contributed to this report.

Public pleads with Sarasota School Board to keep Superintendent Asplen