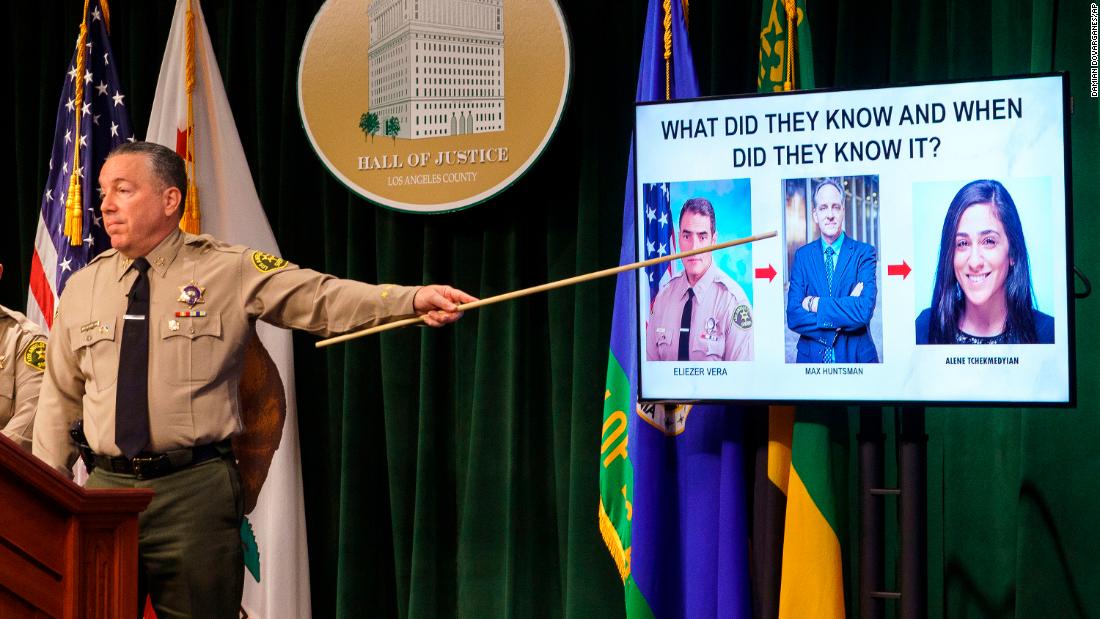 On Tuesday he alerted press freedom advocates by lashing out at a press conference and indicating that a Los Angeles Times reporter was under criminal investigation. Later in the day, he attempted to walk back his alarming comments, but it’s important to understand the background, including Villanueva’s highly controversial behavior and his attacks against the media.

Villanueva has repeatedly singled out LA Times reporter Alene Tchekmedyian, who is just doing her job by covering his department. Tchekmedyian has published a series of stories about an incident in which a deputy kneeled on an inmate – including an article on Monday regarding an allegation that Villanueva was implicated in a cover-up.

At Tuesday’s press conference, Villanueva displayed and pointed to a photo of Tchekmedyian, plus one of his political rivals and the sheriff’s inspector general. Arrows implied a connection between all three. Villanueva referred to video of the incident that Tchekmedyian had obtained as “stolen property.” And he declared that he was investigating “all parties” involved in the matter. When repeatedly asked whether Tchekmedyian was specifically under investigation, Villanueva responded that “all parties to the act” were being probed.

But after widespread condemnation and a warning from the paper’s general counsel, Villanueva sort of walked back his remarks. “Resulting from the incredible frenzy of misinformation being circulated, I must clarify at no time today did I state an LA Times reporter was a suspect in a criminal investigation,” the LA County Sheriff’s Department tweeted Tuesday night. “We have no interest in pursuing, nor are we pursuing, criminal charges against any reporters.”

Notably, Villanueva appears to have set up a straw man here. There is a difference between being the subject of an investigation and a suspect in an investigation where criminal charges can be brought against the person. The former was reported by news organizations, not the latter …

“An abuse of your official position”

Hours before the department’s tweet, LA Times general counsel Jeff Glasser wrote the sheriff a scathing note. Glasser described Villanueva’s remarks as a “thinly veiled attempt to intimidate” to intimidate Tchekmedyian “for reporting unflattering (but entirely accurate) information about the conduct of individuals in your department and allegations of a cover-up by you and other officials.”

Glasser said it was “an abuse of your official position that risks subjecting you and the county to legal liability.” He demanded that the department “preserve all documents related to any ‘investigation’ of Ms. Tchekmedyian or any other LA Times employee in this matter.” You can read the full letter here …

A history of going after the press

This is far from the first time that Villanueva has made the press a target, as LA Mag’s Ian Spiegelman wrote earlier this month. He has objected to Tchekmedyian before. The LA Times recalled an incident last year in which the sheriff’s department refused to talk to her. “The department suggested it would answer questions from ‘any other’ Times reporter,” the story said. “The Times declined to assign a new reporter to the story.”

>> Robert Garcia, the mayor of Long Beach City, which is in LA County, said it was “a clear attack on the free press and incredibly dangerous” and called on other elected officials to “denounce this behavior and stand up to these actions by the Sheriff …”

>> The Reporters Committee for Freedom of the Press described Villanueva’s move as “beyond the pale” and a violation of the First Amendment, condemning it in the “strongest terms …” Student loan forgiveness: The Biden administration dealt another setback in court in an effort to revive the student loan debt relief policy