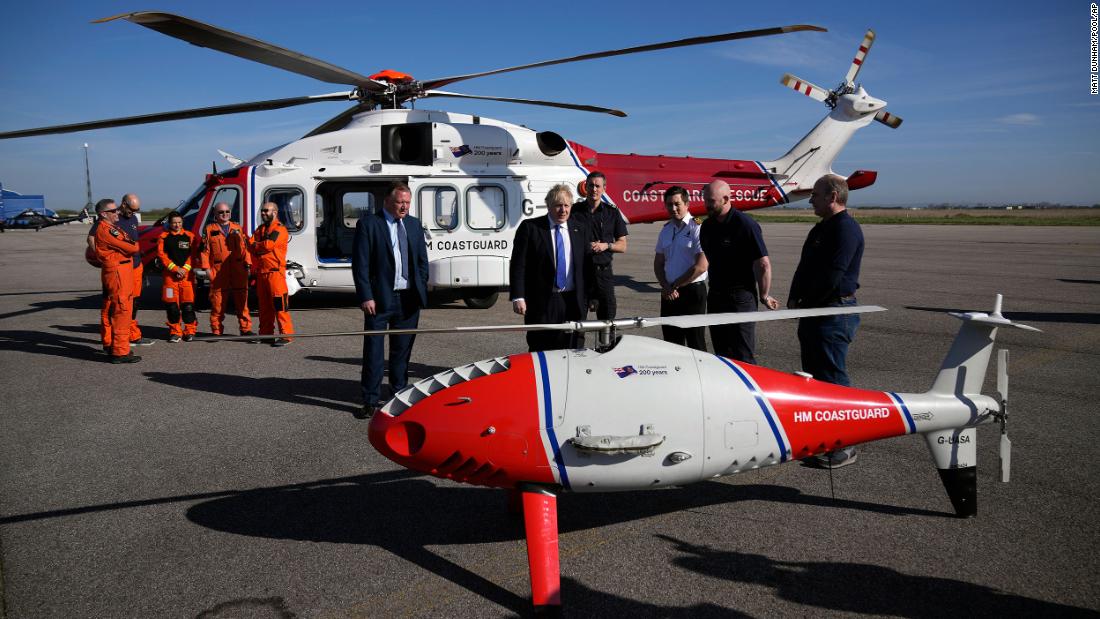 UK Prime Minister Boris Johnson called the scheme an “innovative approach, driven by our shared humanitarian impulse and made possible by Brexit freedoms,” on Thursday, saying that with the UK’s help, Rwanda will have the capacity to resettle “tens of thousands of people in the years ahead. “

Speaking at a joint news conference in the Rwandan capital Kigali on Thursday, UK Home Secretary Priti Patel said that people relocated to Rwanda “will be given the support including up to five years of training, integration, accommodation, health care, so that they can resettle and thrive. “
Patel also called the plan a “joint new migration and economic development partnership,” saying that the UK is “making substantial investment in the economic development of Rwanda.”

Patel insisted the aim of the agreement was to improve the UK asylum system, which she said has faced “a combination of real humanitarian crises and evil people smugglers profiteering by exploiting the system for their own gains.”

When a reporter asked what the criteria would be for relocation, Patel said “we are very clear that everyone who enters the UK illegally will be considered for resettlement and being brought over to Rwanda, I’m not going to divulge specific criteria for a number of reasons. “

Biruta added that the program will only be for people seeking asylum in the UK and who are in the UK, and that they would “prefer not to receive people from immediate neighbors like the DRC, Burundi, Uganda, Tanzania.”

The United Nations Refugee Agency (UNHCR) expressed “strong opposition and concerns” about the plan and urged both countries to reconsider.

“People fleeing war, conflict and persecution deserve compassion and empathy. They should not be traded like commodities and transferred abroad for processing,” UNHCR’s Assistant High Commissioner for Protection Gillian Triggs said in a statement.

“UNHCR remains firmly opposed to arrangements that seek to transfer refugees and asylum-seekers to third countries in the absence of sufficient safeguards and standards. Such arrangements simply shift asylum responsibilities, evade international obligations, and are contrary to the letter and spirit of the Refugee Convention, “Triggs said.

UNHCR also said that the plan would increase risks and cause refugees to look for alternative routes, putting more pressure on front line states.

“Experience shows that these agreements are eye-wateringly expensive usually. They often violate international law. They do not lead to solutions, rather to widespread detention or to more smuggling,” UNHCR Senior Legal Officer Larry Bottinick told British radio station Times Radio on Thursday.

Human Rights Watch was fiercely critical of the plan, issuing a strongly-worded statement.

“Rwanda has a known track record of extrajudicial killings, suspicious deaths in custody, unlawful or arbitrary detention, torture, and abusive prosecutions, particularly targeting critics and dissidents. In fact, the UK directly raised its concerns about respect for human rights with Rwanda, and grants asylum to Rwandans who have fled the country, including four just last year, “it said, adding,” At a time when the people of the UK have opened their hearts and homes to Ukrainians, the government is choosing to act with cruelty and rip up their obligations to others fleeing war and persecution. “

“Sending people to another country – let alone one with such a dismal human rights record – for asylum ‘processing’ is the very height of irresponsibility and shows how far removed from humanity and reality the Government now is on asylum issues,” Valdez -Symonds said in a statement.

As part of the new plan, the British Royal Navy will take over operational command from Border Force in the English Channel “with the aim that no boat makes it to the UK undetected,” Johnson said.

It also allows UK authorities to prosecute those who arrive illegally, “with life sentences for anyone piloting the boats,” he said.

The English Channel, a narrow waterway between Britain and France, is one of the busiest shipping lanes in the world. Refugees and migrants fleeing conflict, persecution and poverty in the world’s poorest or war-torn countries risk the dangerous crossing, often in dinghies unfit for the voyage and at the mercy of people smugglers, hoping to claim asylum or economic opportunities in Britain.

Last November, 27 people drowned in bitterly cold waters off the coast of France after an inflatable boat carrying migrants bound for Britain capsized, in one of the deadliest incidents in the English Channel in recent years.

CNN’s Kara Fox and Helen Regan contributed to this report.