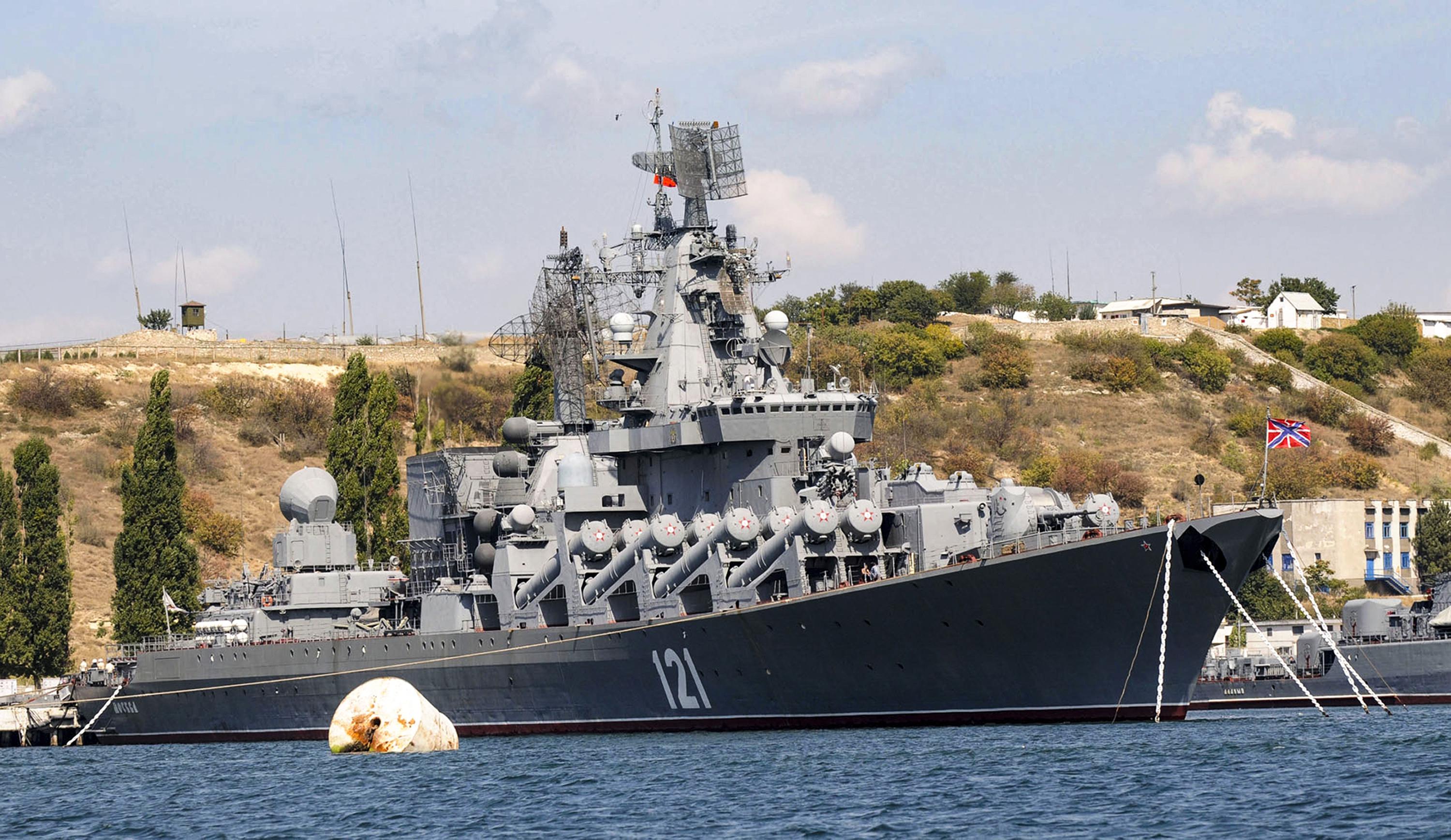 KYIV, Ukraine (AP) – The Russian military sustained a major blow Thursday when the flagship of the country’s Black Sea fleet was badly damaged and its crew evacuated. Ukrainian officials said their forces hit the vessel with missiles, while Russia acknowledged a fire aboard the Moscow but no attack.

The warship named for the Russian capital was 60 to 65 nautical miles south of Odesa when the fire ignited, and the vessel was still battling flames hours later while heading east, according to a Pentagon official. The loss of the ship would be a major military setback and a devastating symbolic defeat for Moscow as its troops regroup for a renewed offensive in eastern Ukraine after retreating from much of the north, including the capital.

Despite an early report from one Ukrainian official saying the ship had sunk, the Moscow was still moving on its own power, at least for now, a senior US defense official said. The official, who spoke on condition of anonymity to discuss internal US military assessments, said the Pentagon could not confirm what caused the fire.

Russia said the fire aboard the ship, which would typically have 500 sailors on board, forced the entire crew to evacuate. It later said the fire had been contained and that the ship would be towed to port with its guided missile launchers intact.

The ship can carry 16 long-range cruise missiles, and its removal from combat would greatly reduce Russia’s firepower in the Black Sea. Regardless of the extent of the damage, any attack would represent a huge blow to Russian prestige in a war already widely seen as a historic blunder. Now entering its eighth week, Russia’s invasion has stalled because of resistance from Ukrainian fighters bolstered by weapons and other aid sent by Western nations.

Satellite photos from Planet Labs PBC show the Moscow steaming out of the port of Sevastopol on the Crimean Peninsula on Sunday. But cloud cover on Thursday made it impossible to use satellite images to locate the ship or determine its condition.

The news of the flagship’s damage overshadowed Russian claims of advances in the southern port city of Mariupol, where they have been battling the Ukrainians since the early days of the invasion in some of the heaviest fighting of the war – at a horrific cost to civilians.

It was unclear how many forces were still defending Mariupol.

Russian state television broadcast footage that it said was from Mariupol showing dozens of men in camouflage walking with their hands up and carrying others on stretchers. One man held a white flag.

Mariupol’s capture is critical for Russia because it would allow its forces in the south, which came up through the annexed Crimean Peninsula, to fully link up with troops in the eastern Donbas region, Ukraine’s industrial heartland and the target of the coming offensive.

Moscow-backed separatists have been battling Ukraine in the Donbas since 2014, the same year Russia seized Crimea. Russia has recognized independence of the rebel regions in the Donbas.

The loss of the Moscow could delay any new, wide-ranging offensive.

Maksym Marchenko, the governor of the Odesa region, across the Black Sea to the northwest of Sevastopol, said the Ukrainians struck the ship with two Neptune missiles and caused “serious damage.”

Oleksiy Arestovych, an adviser to Ukraine’s president, then said the ship sank, calling it an event of “colossal significance.” But Yuriy Sak, an adviser to Ukraine’s defense minister, later said he was unable to confirm that the ship was sunk or even hit by Ukrainian forces. He said he was aware of the comments by other Ukrainian officials but “could neither confirm nor deny” what happened.

“If or when this is confirmed, if it is confirmed, we can only have a sigh of relief because this means that fewer missiles will reach Ukrainian cities,” he told The Associated Press.

Russia’s Defense Ministry said ammunition on board detonated as a result of a fire, without saying what caused the blaze. It later said the ship was afloat and would be towed in for repairs. It said its “main missile weapons” were not damaged. In addition to the cruise missiles, the warship also had air-defense missiles and other guns.

The Neptune is an anti-ship missile that was recently developed by Ukraine and based on an earlier Soviet design. The launchers are mounted on trucks stationed near the coast, and, according to the Washington-based Center for Strategic and International Studies, the missiles can hit targets up to 280 kilometers (175 miles) away.

The US was not able to confirm Ukraine’s claims of striking the warship, US national security adviser Jake Sullivan said Thursday. Still, he called it “a big blow to Russia.”

“They’ve had to kind of choose between two stories: One story is that it was just incompetence, and the other was that they came under attack, and neither is a particular the good outcome for them,” Sullivan told the Economic Club of Washington.

During the first days of the war, The Moskva was reportedly the warship that called on Ukrainian soldiers stationed on Snake Island in the Black Sea to surrender in a standoff. In a widely circulated recording, the soldier responds: “Russian warship, go (expletive) yourself.”

The AP could not independently verify the incident, but Ukraine and its supporters consider it an iconic moment of defiance. The country recently unveiled a postage stamp commemorating it.

Russia invaded on Feb. 24, but its ground advance stalled in the face of strong Ukrainian resistance with the help of Western arms, and Russia has lost potentially thousands of fighters. The conflict has killed untold numbers of Ukrainian civilians and forced millions more to flee. It’s also threatened the global economy and further inflated already high prices at grocery stores and gasoline pumps around the world.

Russian authorities on Thursday accused Ukraine of sending two low-flying military helicopters across the border and firing on residential buildings in the village of Klimovo in Russia’s Bryansk region, some 11 kilometers (7 miles) from the frontier. Russia’s Investigative Committee said seven people, including a toddler, were wounded.

Russia’s state security service had earlier said Ukrainian forces fired mortar rounds at a border post in Bryansk as refugees were crossing, forcing them to flee.

The reports could not be independently verified. Earlier this month, Ukrainian security officials denied that Kyiv was behind an air strike on an oil depot in the Russian city of Belgorod, some 55 kilometers (35 miles) from the border.

Associated Press journalists around the world contributed to this report. 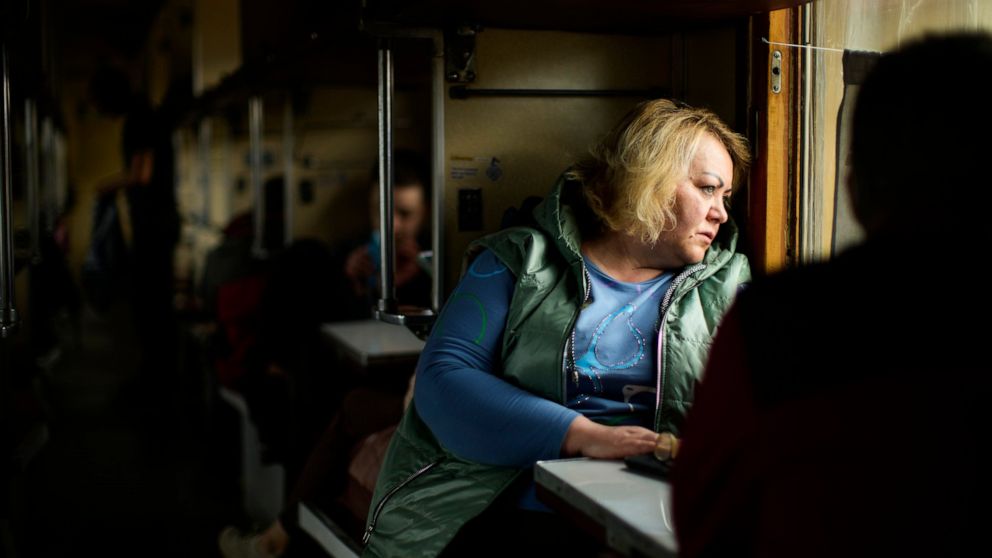