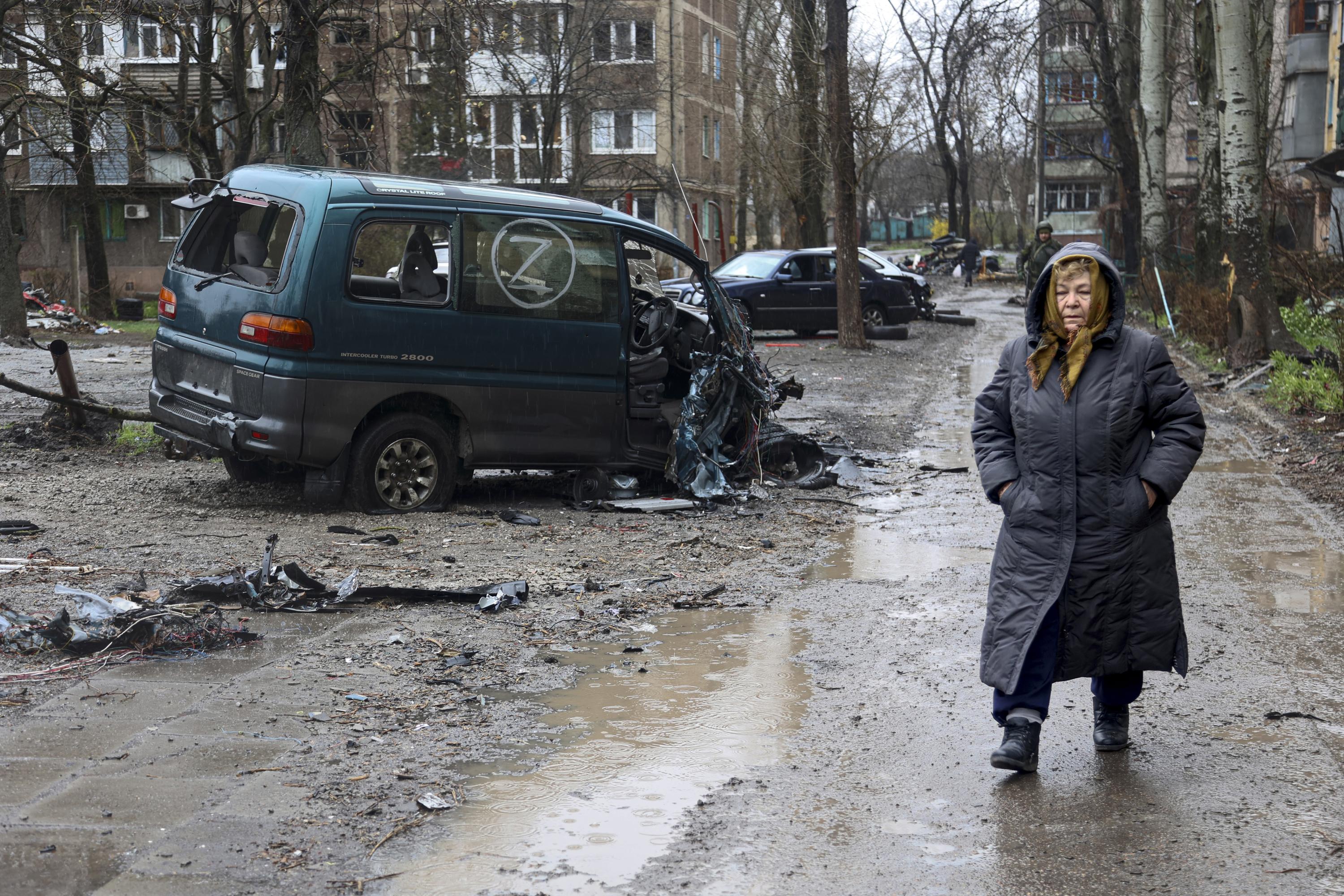 Russian authorities have accused Ukrainian forces of launching air strikes on the Russian region of Bryansk which borders with Ukraine, the latest in a series of allegations of cross-border attacks by Kyiv on Russian territory.

Russia’s Investigative Committee alleged that two Ukrainian military helicopters entered Russia’s air space on Thursday and, “moving at low altitude, acting deliberately, they carried out at least six air strikes on residential buildings in the village of Klimovo,” about 11 kilometers away from the Russian border.

It said at least six houses in the village were damaged and seven people, including a toddler, sustained injuries. The Investigative Committee has launched a probe into the attack.

Earlier on Thursday, Russia’s state security service, or the FSB, also accused Ukrainian forces of firing mortars at a border post in the Bryansk region on Wednesday.

The reports could not be independently verified. Earlier this month, Ukraine’s top security officials denied that Kyiv was behind an air strike on an oil depot in the Russian city of Belgorod, 35 miles from the border.

KEY DEVELOPMENTS IN THE RUSSIA-UKRAINE WAR:

– UN says Ukraine was threatening to devastate many poor nations

– Go to https://apnews.com/hub/russia-ukraine for more coverage

GENEVA – The international Red Cross says it’s rolling out its largest-ever cash assistance program to help more than 2 million people in Ukraine or who have fled abroad cope with the fallout from Russia’s invasion.

Humanitarian groups like the IFRC have recently touted the effectiveness of cash assistance programs for people in places hit by events like natural disasters, drought, famine and conflict, as a way to “allow people to decide what they need” and put money back into the local economy, ”Robicheau said by phone.

The program aims to help some 360,000 people inside Ukraine and many more in countries of refuge.

IFRC says it and national Red Cross organizations have already helped over 1 million people with items like blankets, food, mats and kitchen equipment.

MOSCOW – Russian President Vladimir Putin has warned that Western countries’ attempts to phase out Russian gas imports will have a negative impact on their economies.

Speaking Thursday, Putin said European attempts to find alternatives to Russian gas shipments will be “quite painful for the initiators of such policies.”

He argued that “there is simply no reasonable replacement for it in Europe now.”

Putin noted that “supplies from other countries that could be sent to Europe, primarily from the United States, would cost consumers many times more.” He added it would “affect people’s standard of living and the competitiveness of the European economy.”

The European Union is dependent on Russia for 40% of its natural gas and 25% of its oil.

PARIS – France’s government says it has frozen 33 properties on the French Riviera, Paris and elsewhere that belong to Russian oligarchs targeted for sanctions over the war in Ukraine.

The Finance Ministry this week published an updated list of Russian-owned properties that have been frozen in France, including a luxury chateau overlooking the Mediterranean on the Cap d’Antibes that reportedly belonged to sanctioned Russian billionaire Roman Abramovich.

Together, the 33 properties are estimated to be worth more than half a billion euros. Unlike property that is seized or confiscated, frozen properties still belong to their owners and they can continue living in them. But they cannot be sold or rented out.

The total value of Russian assets frozen or seized in France is now approaching 24 billion euros, with the bulk of that being nearly 23 billion euros in frozen financial assets for the Russian central bank. Aside from financial assets and properties, French authorities have also frozen or seized three yachts and four transport ships, and frozen six helicopters and three artworks.

LVIV, Ukraine – Russia’s Defense Ministry says the fire at the Moskva cruiser, the flagship of Russia’s Black Sea Fleet, has been contained. It says the vessel remains afloat and will be towed to the port.

The ministry said in a statement Thursday that there is no open fire at the ship anymore and explosions of the ammunition have ceased. “The main missile weapons were not damaged,” the statement read.

Ukrainian officials claimed, however, that the ship had sunk, saying it was a “resounding slap in the face” to Moscow’s forces. The conflicting accounts could not be immediately reconciled.

Oleksiy Arestovych, adviser to Ukrainian president’s office, said in a Facebook post that 510 crew were onboard the Moscow cruiser as it sank in the Black Sea, following serious damage from a Ukrainian missile strike.

Military analyst Oleg Zhdanov said the damaging of the Moscow significantly raises the morale of Ukrainian forces on the eve of a new wave of Russian offensive in the Donbas.

In the early hours of Thursday, the Russian Defense Ministry said the ship sustained “serious damage” after its ammunition detonated “as a result of a fire.” The ministry did not ascribe the fire to a missile strike.

LONDON – Ireland’s foreign minister is in Kyiv, the latest in a string of senior European politicians to make the trip to show support for Ukraine’s fight against Russian invasion.

It is also a strong backer of Ukraine’s bid to join the European Union, and the government said Coveney would discuss how Ireland can “assist Ukraine in its application for EU candidate status.”

BERLIN – German authorities say they have seized a massive superyacht in Hamburg after determining that it belongs to the sister of Russian oligarch Alisher Usmanov.

The Federal Criminal Police Office said Wednesday that, after “extensive investigations” and despite “offshore concealment,” it had been able to determine that the owner is Gulbakhor Ismailova, Usmanov’s sister.

Superyacht Dilbar was launched in 2016 at a reported cost of more than $ 648 million.

The German police office said German authorities worked in Brussels to ensure that European Union sanctions applied to the owner. It says the yacht can no longer be sold, rented, or loaded.

The United States and EU last month announced economic sanctions against Usmanov, a metals magnate, over his ties to Russian President Vladimir Putin and in retaliation for the invasion of Ukraine.

PRAGUE – Three Czech lawmakers from Parliament’s upper house, the Senate, are visiting Kyiv together with their counterparts from Poland. Led by speaker Milos Vystrcil, they were invited by Ruslan Stefanchuk, chairman of Ukraine’s unicameral parliament Verkhovna Rada.

UNITED NATIONS – A UN task force is warning in a new report that Russia’s war against Ukraine threatens to devastate the economies of many developing countries that are now facing even higher food and energy costs and increasingly difficult financial conditions.

UN Secretary-General Antonio Guterres launched the report Wednesday stressing that the war is “supercharging” a crisis in food, energy and finance in poorer countries that were already struggling to deal with the COVID-19 pandemic, climate change and a lack of access to adequate funding for their economic recovery.

Rebeca Grynspan, secretary-general of the UN agency promoting trade and development who coordinated the task force, said 107 countries have “severe exposure” to at least one dimension of the food, energy and finance crisis and 69 countries are severely exposed to all three and face “very difficult financial conditions with no fiscal space, and with no external financing to cushion the blow.”

The report urges countries to ensure a steady flow of food and energy through open markets, and it calls on international financial institutions to do everything possible to ensure more liquidity immediately.

Moscow is the flagship of Russia’s Black Sea Fleet.

The Russian Defense Ministry confirmed the ship was damaged Wednesday, but not that it was hit by Ukraine.

The Ministry says ammunition on board detonated as a result of a fire whose causes “were being established,” and the Moscow’s entire crew was evacuated. The cruiser typically has about 500 on board.

KYIV, Ukraine – Ukrainian President Volodymyr Zelenskyy said he was “sincerely grateful” to the US for the new round of $ 800 million in military assistance.

In his daily late-night address to the nation, Zelenskyy also said he was thankful for Wednesday’s visit by the presidents of Poland, Estonia, Lithuania and Latvia.

In his telephone conversation with US President Joe Biden, Zelenskyy said they discussed the new weapons shipment, even tougher sanctions against Russia and efforts to bring to justice those Russian soldiers who committed war crimes in Ukraine.

Zelenskyy also said work was continuing to clear tens of thousands of unexploded shells, mines and tripwires that were left behind in northern Ukraine by the retreating Russians.

He urged people returning to their homes in those towns to be wary of any unfamiliar object and report it to the police.