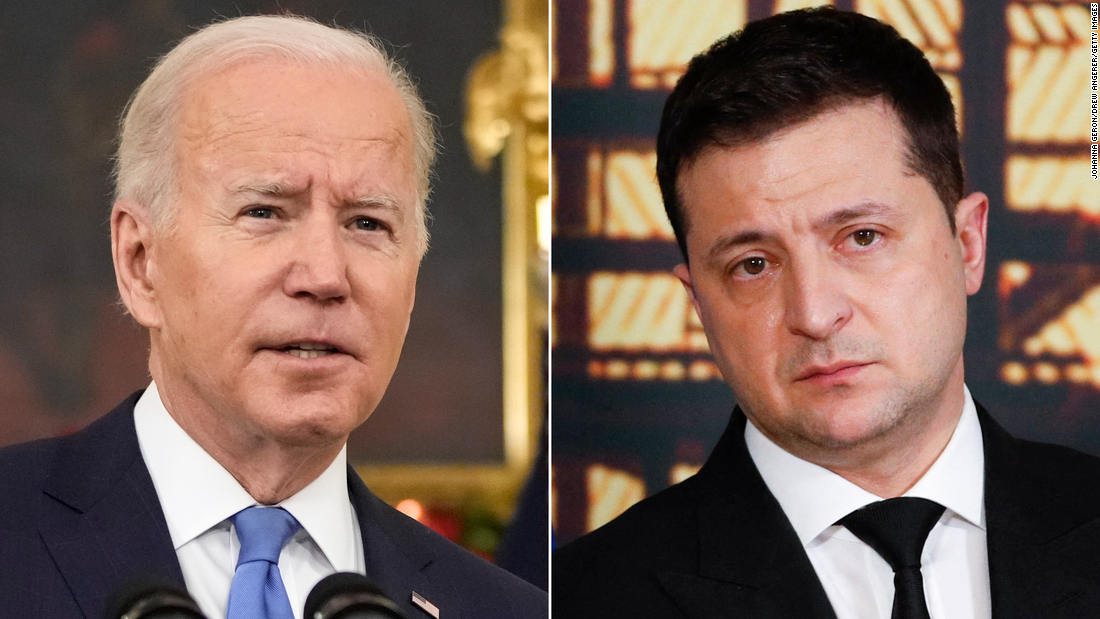 It comes as US officials warn of a potentially bloody new phase in the ongoing war, focused on the eastern regions of Ukraine as Russia withdraws its troops from the area around the capital Kyiv.

“The Ukrainian military has used the weapons we are providing to devastating effect. As Russia prepares to intensify its attack in the Donbas region, the United States will continue to provide Ukraine with the capabilities to defend itself,” Biden said in a statement.

Biden detailed the new announcement in a midday telephone call with Zelensky that lasted for about an hour.

The US is providing Ukraine with 11 Mi-17 helicopters, 300 Switchblade drones, 18 Howitzers and protective equipment to guard against chemical attacks in the latest batch of security assistance approved by the White House, the Pentagon announced. In addition, the new weapons package includes 200 M113 armored personnel carriers, 10 counter-artillery radars, 500 Javelin anti-tank missiles and 30,000 sets of body armor and helmets.

Pentagon press secretary John Kirby said the $ 800 million package was intended to “meet urgent Ukrainian needs for today’s fight” as Russian forces shift the focus of their attack to eastern and southern Ukraine. He said the weapons would start being sent to Ukraine “as soon as possible,” noting that previous security assistance had been sent in as little as four-to-five days after security packages were approved.

As of Tuesday night, two sources said helicopters had been removed from the assistance list, though Biden said in his statement they were ultimately included. Ukraine had initially asked the White House at the last minute not to send the helicopters, indicating they wanted more time to assess whether they’d be useful. But during Wednesday’s phone call, Zelensky told Biden his country needed them, so they were put back in the package, a source familiar with the matter said.

The Mi-17 helicopters that were added to the package had been earmarked for Afghanistan, Kirby said.

The $ 800 million shipment brings the total amount of military assistance the US has provided to Ukraine to more than $ 3 billion. Ukraine’s 2020 defense budget was only about $ 6 billion, according to the Stockholm International Peace Research Institute. In less than two months, the US has provided nearly half of that in security assistance, underscoring the pace at which the White House has worked to send in weaponry and equipment.

Delivery of earlier packages was still being completed as the new one was announced. The US expects a remaining number of the first 100 Switchblade drone systems to get into Ukraine “over the course of the next day,” according to a senior US defense official.

The official also said that another shipment of Javelin anti-tank missiles from the US is expected to get to Ukraine in the next 24 hours. The US also has helped coordinate two airlift deliveries from two other nations into Ukraine, the official said during an off-camera briefing Wednesday.

Switchblade drones are small, portable drones that carry warheads and detonate on impact. The smallest model can hit a target up to six miles away, according to the company that produces the drones.

“The steady supply of weapons the United States and its allies and partners have provided to Ukraine has been critical in sustaining its fight against the Russian invasion. It has helped ensure that Putin failed in his initial war aims to conquer and control Ukraine. We can not rest now. As I assured President Zelenskyy, the American people will continue to stand with the brave Ukrainian people in their fight for freedom, “Biden wrote in a statement.

The Pentagon was still working through how US forces will train Ukrainians on some of the new systems they are sending in the security assistance package.

He said the US would be able to train the Ukrainians on the new systems “very, very quickly,” and would likely be done by training a small number of Ukrainian troops who could then train others, including on the Switchblade drones, some of which were sent in an earlier assistance package.

The new tranche of money for Ukraine comes as the Pentagon hosted the CEOs of the military’s eight largest prime contractors Wednesday to figure out how to arm Ukraine faster, according to a readout of the classified meeting.

The roundtable discussion, led by Deputy Defense Secretary Kathleen Hicks, focused on the Pentagon’s objectives to keep supplying Ukraine with arms while being able to maintain the readiness of US forces and support the defense of allies.

The Pentagon sought to better understand challenges defense contractors face in rapidly producing the arms and equipment that have proved critical to the defense of Ukraine, according to the readout.

On Tuesday, a defense industry official had told CNN the major weapons manufacturers are facing severe supply chain issues and a lack of affordable labor. Manufacturing capacity could face additional challenges as Ukraine contracts compete with increased US defense spending for the current output, the official said.

The classified roundtable Wednesday was meant in part to address those concerns in an ongoing series of discussions between the Pentagon and the largest weapons manufacturers, including Lockheed Martin, Raytheon and General Dynamics. But it was primarily focused on the goal of “accelerating production” of weapons for Ukraine, including systems that can be shipped quickly and used effectively with minimal training.

A senior defense official said Wednesday that the massive shipments of weapons to Ukraine have not affected the readiness of US forces. The official called it “prudent” to have the discussions “before it becomes a crisis issue for our own readiness.”

This story has been updated with additional reporting Wednesday.