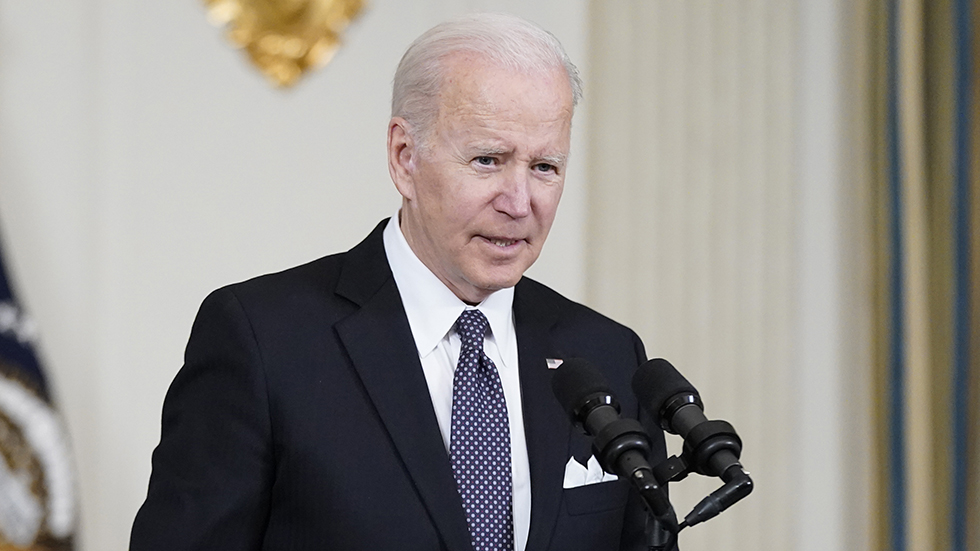 Investigations into whether Russia used chemical weapons in Ukraine are putting a renewed focus on how the White House has tiptoed around setting any “red lines” should Moscow further violate international norms in its assault on Ukrainians.

President Biden, along with senior administration officials, have for weeks repeated warnings that Russian President Vladimir Putin is capable of carrying out a chemical weapons attack in Ukraine.

Experts, comparing the situation to Putin’s devastation in Syria that resulted in tens of thousands of civilian deaths, say the Russian president may feel emboldened to use such tactics in Ukraine if he believes severe punishments would once again not follow.

Ukrainian troops in Mariupol on Monday said they suffered respiratory failure after Russian drones passed overhead and appeared to drop some sort of noxious fumes, raising the specter of a possible chemical weapons attack.

But US officials said Tuesday that they did not have investigators on the ground and were therefore unable to confirm reports of potential chemical weapons used in the southern, seaside city, which has been the site of intense strikes that have killed hundreds of civilians in recent weeks. .

We are not in a position to confirm anything. I do not think the Ukrainians are either, ”Secretary of State Antony Blinken told reporters on Tuesday.

But he added that the US had shared “credible” information with Ukraine and other allies that Russia may mix riot control agents, such as tear gas, with chemical agents, and deploy that as part of its siege on Mariupol.

“This is a real concern – it’s a concern we’ve had before the aggression started. I pointed to the possibility that these kinds of weapons would be used, and it’s something we’re very, very focused on, ”Blinken said.

Biden and his senior officials have warned that Putin carrying out such an attack would trigger a “severe price,” but have specifically avoided drawing any red lines, a phrase that may trigger memories of criticism against former President Obama that he failed to enforce military punishment that he had threatened over chemical weapons use in Syria in 2012.

“We do not like red lines around here, so I’m not going to use that phrasing,” White House press secretary Jen Psaki, who served in the Obama administration, said on March 14.

The furthest Biden would go on that notion was at a NATO press conference last month, when he vowed the US and the military alliance would respond – but offered no details on how – if Putin uses chemical weapons, adding: “The nature of the response would depend on the nature of the use. ”

The Organization for the Prevention of Chemical Weapons said in a statement Tuesday that it is concerned about the “unconfirmed reports of chemical weapons,” and that it is closely monitoring the situation in Ukraine and stands ready to assist in an investigation.

Mark Cancian, a senior adviser for the international security program at the Center for Strategic and International Studies, said that despite the administration’s reluctance to use the phrase “red line”, the use of chemical weapons would mark a “dramatic escalation” and violation of a “long-standing international red line on the use of force and weapons.”

This is on top of other atrocities the US and allies say Putin and Russian forces are responsible for committing, including war crimes of targeted civilian killings, torture, kidnappings and rape.

But Cancian said response options are limited given the extensive raft of sanctions already rolled out over the last six weeks.

“It’s to the Ukrainians to respond in a way that we can help,” William Taylor, former ambassador to Ukraine and vice president of the Russia and Europe program at the US Institute of Peace, told The Hill.

“We ought to provide every bit of intelligence that we have about the military unit – there’s a [Russian] chemical weapons unit apparently in Mariupol that is getting ready to – if it has not already used these weapons, and that ought to be targeted. ”

A core group of national security officials focused on Ukraine within the White House, reportedly called the Tiger Team, have prioritized sketching out possible responses by the US and its allies should Russian chemical weapons attacks be confirmed.

Biden reportedly brought up those scenarios on his trip to Brussels last month in his meeting with European leaders and allies with NATO.

This is on top of the administration delivering to Ukraine protective equipment against chemical weapons. And the World Health Organization said it provided 1,500 health workers in Ukraine with guidelines if a chemical attack occurs.

Taylor said the administration is correct to remain ambiguous over what it views as a red line, allowing more flexibility in possible reactions and avoiding the escalation between nuclear-armed powers.

“I’m afraid one of the lessons from Syria, that Putin and Assad took away, is that using chemical weapons works,” he said.

“Putin is probably making a calculation that despite Biden’s warnings he can do this, it will help him win the war, and the West will not intervene in a significant way.”

Obama held back from launching military action in Syria in response to a chemical weapons attack on opposition from international allies and Congress.

And while the former Trump administration undertook at least two military strikes against Syria, Assad and Putin have largely escaped accountability for at least a handful of brutal attacks that killed thousands of people, with horrifying images of people dying in the streets, foaming at the mouths and dead children piled on top of each other.

“The horror of chemical weapons was very clear in Syria… that witness makes it very clear what’s going on now, in Mariupol,” Taylor said. “We know what the horrible effects there are and it heightens the awareness, heightens the outrage, heightens the approprobrium that Russia has fallen into.”

But Taylor said the Biden administration has likely assessed that a US military strike would raise the risk too greatly of a larger confrontation with Russia.

Kroenig, who also served at the Pentagon during Republican and Democrat administrations, agreed that the current White House has been “pretty clear that the US is not getting involved militarily” but that his assessment is a limited military strike against the sources of a chemical weapons attack could be carried out without risking a major escalation.

“I do not think Putin wants a major war with the United States,” he said, warning against allowing impunity to continue using chemical weapons.

“Ideally, we want the lesson to be that this did not work, this did not help Putin and essentially, it’s not a good idea to use these weapons in the future. You will fail, you’ll be punished for it, it’s not the key to success, ”he said.