WASHINGTON – It was not quite at the steps of the US Capitol, but awfully close.

The bus pulled up to an intersection a few blocks from the Capitol, close to Union Station, shortly after 7 am Central.

That location also happens to be next to a building that houses the operations of several television outlets, including Fox News.

The network aired footage showing migrants leaving the bus one at a time, clutching manila envelopes and wearing hospital-style bracelets on their wrists.

Texas Gov. Greg Abbott signed a letter last week directing the Texas Division of Emergency Management to provide the bus rides to migrants who are released from federal custody in cities along the border with Mexico – if the migrants volunteer.

Despite assurances from Texas officials that the program is completely voluntary, some civil rights groups have raised legal questions about the plan, largely centered around whether the migrants could feel coerced to board the buses.

Defenders of the busing have characterized it as a desperate attempt by Texas to deal with broken federal immigration policy generally and the surge of migrants expected when pandemic-related border restrictions are lifted next month.

According to Fox News, 23 migrants disembarked the bus Wednesday morning and waved to it as it drove off.

That tally included 19 men, four women and two small children, according to Fox, and included individuals from Nicaragua and Venezuela.

In a statement early Wednesday, Abbott confirmed the arrival of the first bus and said it included migrants from Colombia, Cuba, Venezuela and Nicaragua. He said a second bus is en route to Washington. 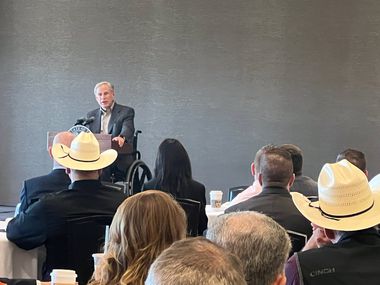 “As the federal government continues to turn a blind eye to the border crisis, the State of Texas will remain steadfast in our efforts to fill in the gaps and keep Texans safe,” Abbott said. “By busing migrants to Washington, DC, the Biden Administration will be able to more immediately meet the needs of the people they are allowing to cross our border. Texas should not have to bear the burden of the Biden Administration’s failure to secure our border. ”

It was not immediately clear how the drop-off point for the first bus was chosen, but social media users were quick to highlight its proximity to Republicans’ preferred cable news outlet.

“Greg Abbott sending a bus full of migrants to Fox News HQ proves what we already know: Operation Lone Star is nothing more than a taxpayer-funded publicity stunt,” Texas Democrats wrote on Twitter.

Several migrants from Venezuela who were on the bus told a CNN reporter they had arrived at the border on Sunday seeking asylum and were released pending immigration proceedings.

The migrants said they were offered the bus ride to Washington and voluntarily accepted it.

The first migrants bused from Texas arrived at Union Station in Washington, DC, on Wednesday morning, after Texas Gov. Greg Abbott said he would send migrants to the capital in a rebuke of Biden’s border policies. I spoke to some of those migrants. 🧵