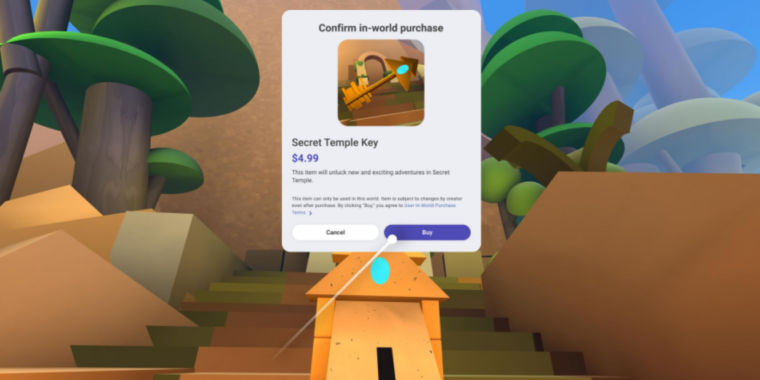 Meta, the company formerly known as Facebook, announced some initial plans on Wednesday to allow content creators to monetize in its would-be Metaverse platform, Horizon Worlds. Meta’s planned revenue share for contributors’ creations could add up to nearly 50 percent.

Horizon Worlds is a network of shared 3D spaces that is currently exclusively available on Oculus Quest headsets. (Meta has plans to bring it to mobile, game consoles, and desktop VR in the coming months and years.)

There are already people creating spaces for Horizon Worlds, including a virtual yoga studio and a Second Life-like fast-food brand integration in the form of the “Wendyverse.” But to date, Horizon Worlds has not offered the tools for creators to make a living creating that content like they could on similar services like Roblox.

That’s not to say creators haven’t been making money; some get paid for contract work outside of Meta’s system for creating content that brands or other users can use. But Meta’s announcements paint a picture of what to expect.

First off, Horizon Worlds will support in-world purchases. A handful of creators will be able to sell virtual items from within user-generated areas. Meta also plans to introduce a creator bonus program that awards money to creators based on how much other users engage with their content.

All this sounds like what you’d expect, but Meta caused a stir in the AR / VR, NFT, and the relevant online communities when it revealed specifics about how much revenue Meta will take from each transaction.

When users purchase an item in Horizon Worlds, Meta confirmed to CNBC that it would take a 25 percent cut — but that’s after any amount a hardware platform might take. Right now that just means Meta’s Oculus store, which takes a 30 percent cut. So content creators will have to hand over 30 percent to the Oculus store (or the applicable percentage for whatever platform stores Horizon Worlds ends up on later, like Google Play), then they’ll have to cede 25 percent of what’s left to Horizon Worlds .

That leaves creators with just over half of their content’s revenue before any applicable taxes.

The announcement has drawn ire from creators in the loosely related NFT community, who are accustomed to single-digit percentage platform takes. There are also accusations of hypocrisy from game developers and others who have seen Meta publicly criticize companies like Apple for charging 30 percent on similar transactions around in-game content.

So far, Meta has brushed off the controversy. Vivek Sharma, Meta’s VP of Horizon Worlds, told The Verge, “We think it’s a pretty competitive rate in the market … we believe in the other platforms being able to have their share.”

Meta is an enormous company with several disparate objectives and teams behind each of those objectives. It’s not that surprising that a Horizon Worlds executive is telling a different story (other platforms deserve their cut) than the parts of Meta that are agitating Apple and others (claiming those platforms’ cuts are unreasonable).

But conflicting messaging aside, content creators we’ve spoken with say the chunk of the pie they’ll get on this platform is far less than expected.

Horizon Worlds is just one part of Meta’s plan to bring AR, VR, and virtual worlds to the masses. The company also plans to introduce mass-market augmented reality glasses sometime in 2024, placing it in direct competition with Apple and other companies with similar plans.