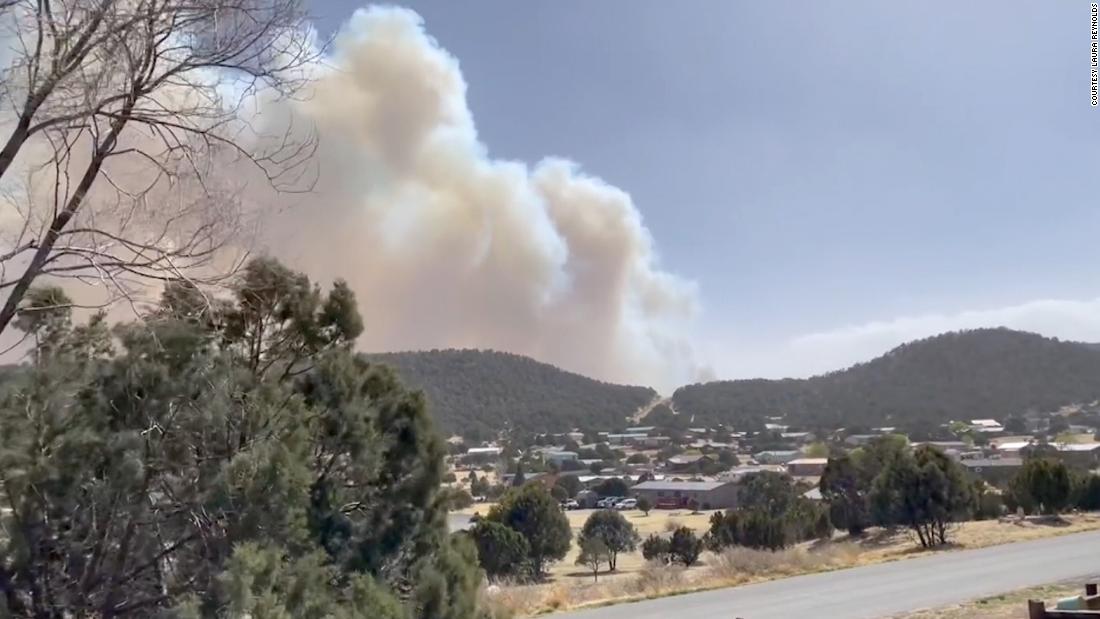 Officials were telling many of the village’s 7,600 residents to evacuate and go to the convention center. More evacuation orders are possible, they said.

The McBride Fire was 4,312 acres as of Tuesday night, the New Mexico Forestry Division said in a news release.

“The fire is 0% contained at this time and has moved into the Kokopelli subdivision. Approximately 150 structures burned or were damaged, including homes, and many more remain threatened,” the release said.

Crews knocked the fire back near the middle school, town officials said on Facebook, and 1,700 students from the high school, middle school and elementary school were evacuated to the convention center.

Officials added that power outages continued in the area.

Laura Reynolds, who lives in the Rancho Ruidoso Valley Estate subdivision in nearby Alto, recorded video showing the smoke from the fire looming over her neighborhood. While she was talking to CNN, she said authorities gave orders to evacuate.

The video shows a huge plume of gray smoke coming over the ridges of several mountains while tree branches rustle in the wind.

The fire began Tuesday afternoon, according to New Mexico Fire Information – an interagency website with information from federal and state agencies.

Investigators have not determined the cause of the McBride Fire.

Another major wildfire burning near Albuquerque

About 100 miles to the northwest, another major wildfire, the Big Hole fire, has scorched approximately 850 acres as of Tuesday afternoon, according to Valencia County officials.

At least one firefighter suffered a minor burn injury Monday and is recovering at home, Valencia Fire Chief Matt Propp said. One home and 18 outbuildings have been damaged or destroyed, the department said in a Facebook post.

The fire started in the community of Belen, about 30 miles south of Albuquerque. The cause of the fire, which began Monday, is under investigation. About 100 fire personnel are involved in battling the blaze.

Containment lines have been established, the chief said, but he did not yet have a containment percentage figure.

Propp said the area is seeing 40-50 mph wind gusts. A red flag warning is in effect for the Middle Rio Grande Valley until 9 pm MT, according to the National Weather Service.

About 200 structures are still threatened by the blaze, according to fire officials.

“Approximately 75% of the Whitfield Wildlife Conservation Area (WWCA) land area has also been impacted. The WWCA center (building) is not affected,” Wendy Mason, a wildfire prevention and communications coordinator with the state, wrote on the website.

CNN’s Amanda Jackson and Amanda Musa contributed to this report.