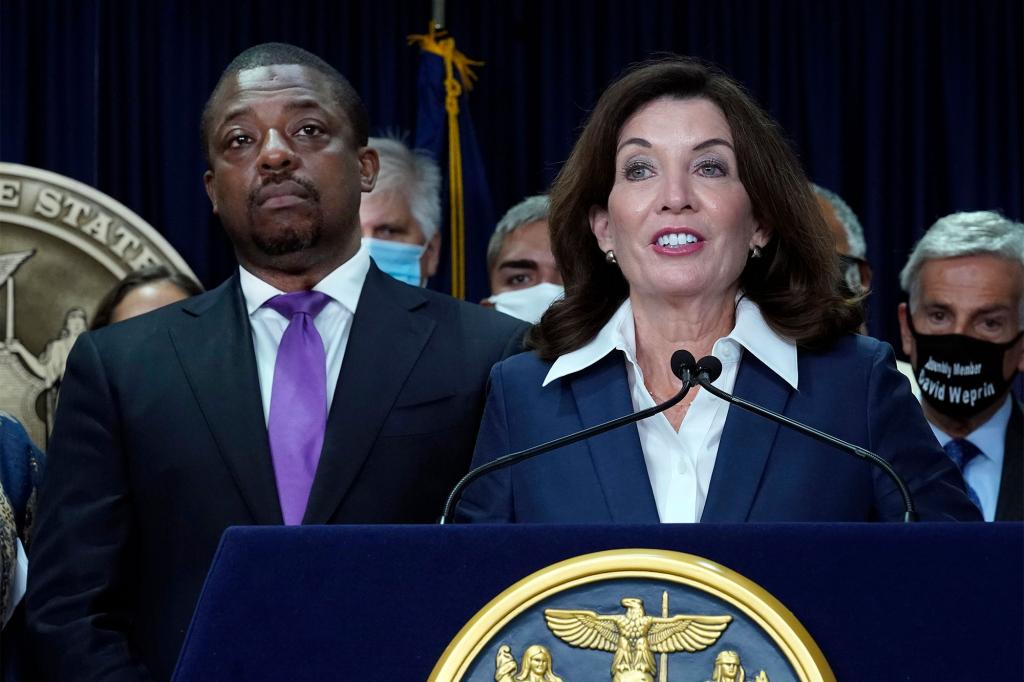 In for a penny, in for a pound.

Gov. Kathy Hochul’s decision to name now ex-Lt. Gov. Brian Benjamin as her running mate despite his well-publicized ethics issues, which eventually resulted in his indictment and arrest on Tuesday, could continue to cost her as she seeks her first full term in office this year, experts told The Post.

“It’s absolutely a blemish because this is someone that she picked and therefore it reflects her having elevated the situation and getting caught where he’s now on the ballot,” said Lee Miringoff, director of the Marist College Institute for Public Opinion.

“It reflects the culture in Albany and that kind of stains her selection process and puts a cloud over it.”

Hochul, who is white, landed on Benjamin shortly after taking office in August, largely out of political necessity. The longtime Buffalo-area politician had sought to balance her prospective ticket with a downstate lawmaker of color.

But Benjamin was only picked after several other high-profile minority lawmakers from New York City made it clear they were uninterested in the position, sources say.

Those discussions took place as Attorney General Letitia James contemplated a now-aborted run for the governor’s office, which would have garnered widespread support from African American politicians in the outer boroughs.

“He came in fourth and he lost his own district,” said a well-connected Democratic consultant. “You almost are questioning who is advising her on her downstate political operations as it pertains to the Black and Latino communities.”

Once she made the pick, Hochul had no easy politically palatable way to dump Benjamin as her running mate as his legal woes mounted recent months before Tuesday’s indictment – despite the growing toll on her image, experts told The Post.

“She was stuck, had she dumped him too quickly, she would have appeared to be insensitive to African Americans and she can not afford to lose that constituency,” said longtime Democratic strategist Hank Sheinkopf. “She had no choice but to wait.”

“You can not dump someone before they’s charged and these indictments fall from the sky,” said Eric Soufer. “I’ve been there before with Malcolm Smith,” referencing another convicted New York politician, who had tried to bribe his way into the 2013 mayoral race.

Hochul selected Benjamin shortly after she became governor in August as she succeeded in disgraced ex-Gov. Andrew Cuomo.

Tuesday’s indictment that Benjamin “repeatedly” provided false information to Hochul’s team as part of the vetting process for the job.

However, the then-state Senator’s ethics woes were already public following stories from an investigative news outlet, The City, which revealed a pattern of fraudulent donations to his failed campaign for city Comptroller.

“Benjamin is now the face of crime,” Sheinkopf added. “He’s the drag on the democratic ticket. He’ll remain a problem in the fall. ”