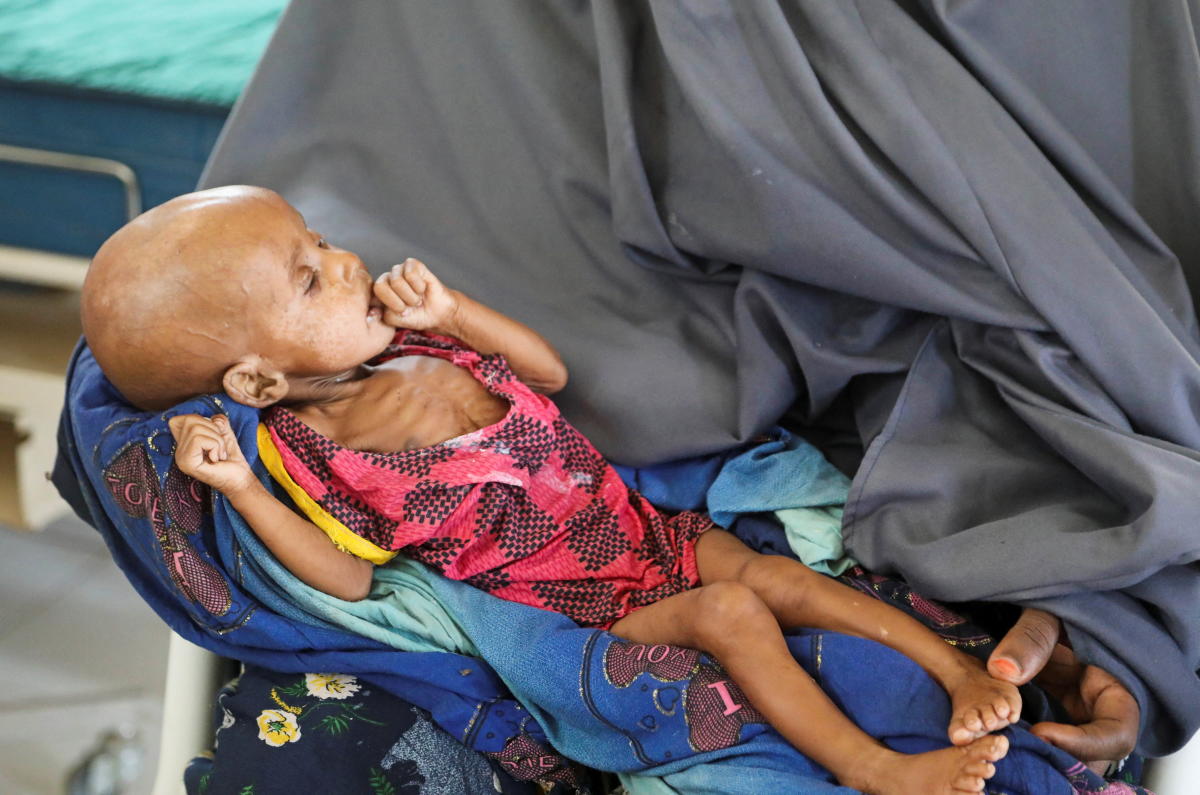 The United Nations is warning that 350,000 children in Somalia could die due to starvation unless the world rallies to provide food aid to the impoverished African nation that is in the grips of a fourth straight year of crippling drought made worse by climate change.

“As we speak now, 1.4 million children under 5 years of age are severely malnourished, and if we do not step up our intervention, it is projected that 350,000 of them will perish by the summer of this year. The situation cannot be more dire than that, ”Adam Abdelmoula of the United Nations Office for the Coordination of Humanitarian Affairs said. “So I call on all those who are able to contribute, including the Somali diaspora, the business community, the traditional and nontraditional donors, everyone, to act and to act now.”

Three years of successive drought have left Somalia’s largest river, the Juba, almost entirely dry. The lack of water has affected an estimated 4.5 million people, many of whom make their living as farmers.

“Of all the droughts I have experienced in my 70 years, I have not seen anything as severe as this,” Ahmad Hassan Yarrow, a Somali resident forced from his home in search of food and water, told the UN

In its recently released sixth assessment of the state of the world climate, the UN Intergovernmental Panel on Climate Change warned that climate change and an ongoing La Niña – a climate pattern resulting in dryer weather for the Horn of Africa – were to blame for the drought and soaring temperatures baking the region.

In a nation that has endured decades of political violence and extreme poverty, the effects of climate change are being acutely felt by children.

“Already in this country, 70% of school-age children are not attending school. In just one state in Juba land, the drought has led to closure of 40 schools, and that is going to be the trend in many drought-affected areas, ”Abdelmoula said.

More than 700,000 people have already been displaced due to the successive years of drought, forced to walk barren roads littered with animal carcasses, the BBC reported, to try to make it to population centers in search of food, water and shelter.

Making matters worse, Russia’s invasion of Ukraine, where many African countries get their wheat and cooking oil, has caused food prices to skyrocket.

“The Food and Agricultural Organization estimates that as many as 13 million more people worldwide will be pushed into food insecurity as a result of Russia’s invasion of Ukraine. The truth of the matter is Putin’s war forces us to take from the hungry to feed the starving. As long as Russia continues its brutal campaign, innocent people are going to pay the price, ”Cindy McCain, US representative to UN agencies in Rome, said last week.

The combination of food and water scarcity and high prices for imported wheat means that Somalia is looking at “a risk of famine,” Abdelmoula said.

With its Somalia Humanitarian Response Plan, the UN is looking to raise nearly $ 1.5 billion to provide humanitarian assistance to 5.5 million of the most vulnerable people in Somalia. To date, however, it has taken in just $ 56.1 million, or 4% of that total.

The problems are not limited to Somalia. According to the International Committee for the Red Cross, at least one-quarter of Africa’s population now faces food insecurity due to factors like drought and higher prices.

Climate change is quickly becoming a constant threat to the continent. At the UN Climate Change Conference in Glasgow, Scotland, in November, industrialized nations continued to grapple with the reality that Africa, specifically, was poised to bear the brunt of a problem that was not of its own making. While the nations at the conference reaffirmed a pledge that would see developed nations provide $ 100 billion annually to develop ones to help transform their economies and meet greenhouse gas emissions targets, the delivery of that money has fallen short.

Even more problematic is an agreement for rich nations to provide “loss and damage” funding for poorer ones to deal with the costs of catastrophic events linked to climate change such as the ongoing drought in eastern Africa.

Of course, the dire situation in Somalia is not an isolated one. As global temperatures continue to rise, the IPCC warns, “by 2030 half the continent of Africa could be displaced as a result of climate change.”