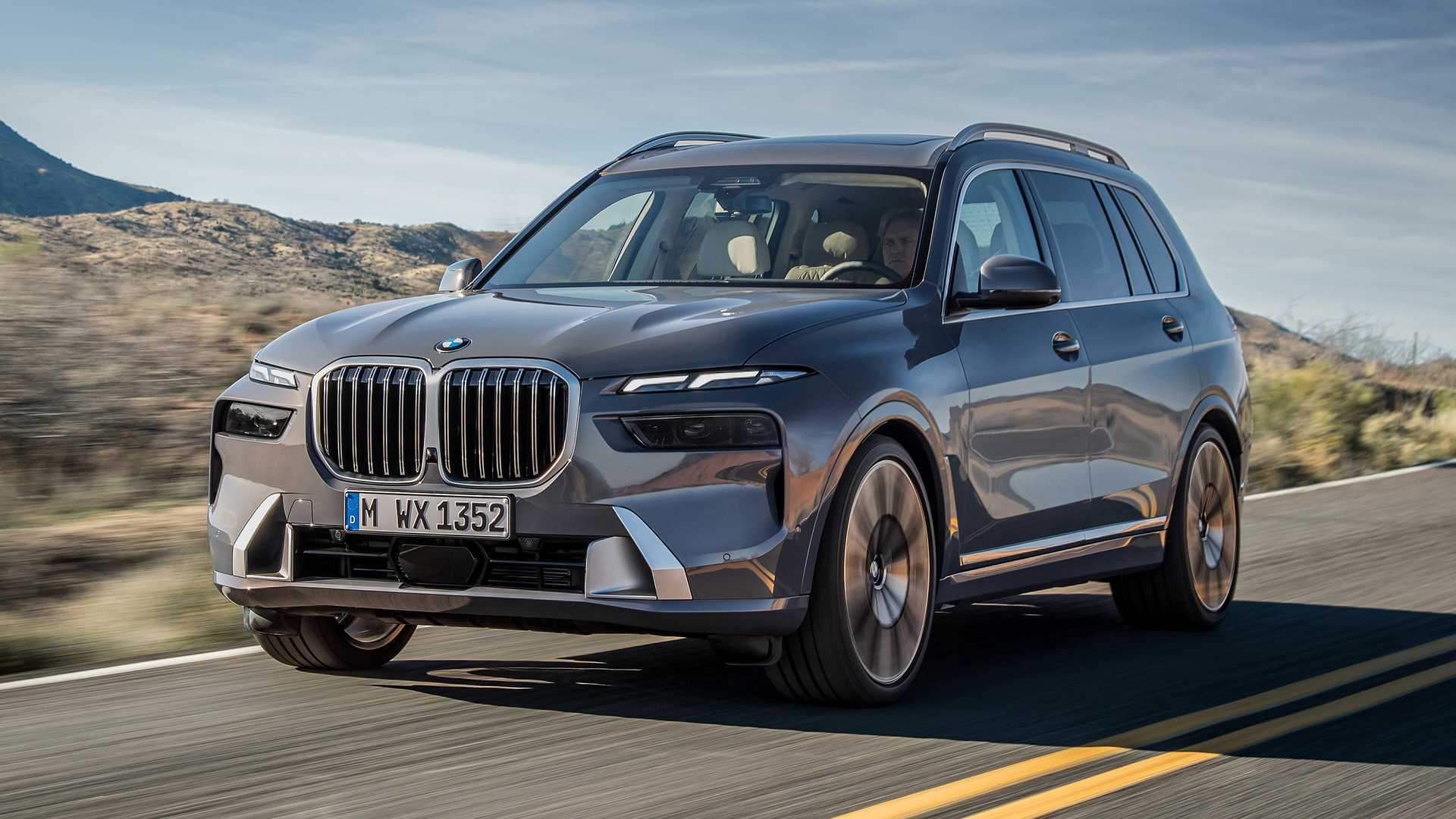 The BMW X7 – Bavaria’s biggest, boldest, best-selling SUV – is due for an update after five years on the market. For 2023, BMW designers tweaked the X7, giving it a sportier front end, minor updates to the rear, extra power in the base model, and a revamped cabin with the latest and greatest technology inside.

Talking about the face first, BMW splits its traditional headlight fixture in two for 2023. This dual lighting setup will be the new staple for full-size BMW models, eventually making its way to the electric i7 and 7 Series sedans, as well as the XM hybrid crossover.

On the X7, the LED running lights sit up top near the hood line while the actual headlights live lower down on the bumper. The goal of this look, BMW says, is to emphasize the X7’s upright stance. Beyond that, the lower fascia on the xDrive40i model sports a new shiny silvery trim that juts up from the base of the bumper, while the updated kidney grille wears darkened slats within a brighter chrome surround. And new for 2023: a Cascade Lighting element within the grille itself, a la Rolls-Royce.

The sportier X7 M60i forgoes chrome for a gloss black treatment instead. The kidney grille and lower vents wear the monotone black, while the headlight fixtures have a darkened sheen that gives them a more aggressive look. And as expected, an M badge lives on the left-hand side of the grille.

To go with that bold new styling, BMW added 14 colors to the palette. Sparkling Copper Gray metallic – pictured here on the xDrive40i model – is one of those new hues, joined by M Marina Bay Blue metallic as pictured on the M60i, with other BMW Individual finishes like Ametrin, Dravit Gray, Tanzanite Blue II, and Frozen Pure Gray also available.

Buyers can also option their X7 with a BMW M 50 Years emblem, which looks something like this. And for the first time ever on a BMW product, 23-inch wheels are available. The base xDrive40i model uses standard 21-inch wheels, the M60i rides on 22-inch alloys, and the 23-inch BMW Individual light-alloy wheels are also available on the top-end model.

The 2023 X7 still offers the same two engine displacements as last year: a base 3.0-liter inline-six and an optional twin-turbocharged 4.4-liter V8. But now, both engines get a 48-volt mild-hybrid assist. The inline-six base has been significantly improved with a 40-horsepower boost, and an extra 52 pound-feet of torque. That gives it a total output of 375 hp and 383 lb-ft. With that, the X7 xDrive40i can now hit 60 miles per hour in 5.6 seconds.

The twin-turbo V8 unit still has the same robust 523 hp and 553 lb-ft as last year, enough to propel the M60i model to 60 in 4.5 seconds. And at the top of the range, the Alpina XB7, with its tweaked twin-turbo V8, produces 630 hp and 590 lb-ft, launching it to 60 in 4.0 seconds and on to a limited top speed of 180 miles per hour. Every version of the X7 for 2023 also features a new eight-speed automatic transmission with a launch control function.

Inside the new X7 is BMW’s latest iDrive 8 infotainment system. Consisting of a 12.3-inch digital instrument cluster and a 14.9-inch touchscreen, both hidden behind a beautiful curve display, iDrive 8 makes its way to a gas-powered BMW for the first time. Thus far, iDrive 8 was only available on the electric iX and i4.

The iDrive 8 interface is a brand-new system compared to the outgoing 7, with a sleeker interface, a more streamlined home screen, and additional features. Things like voice and gesture control, meanwhile, carry over from the previous model.

Multi-contour seats are now standard on the X7, with standard heating functionality for both the driver and front passenger. Previously, both of those were options. Massage and ventilation functions can both be added as an option, and BMW’s vegan Sensafin faux leather is standard in the xDrive40i model. The M60i gets a standard Extended Merino leather, which is also available as an option on the base model.