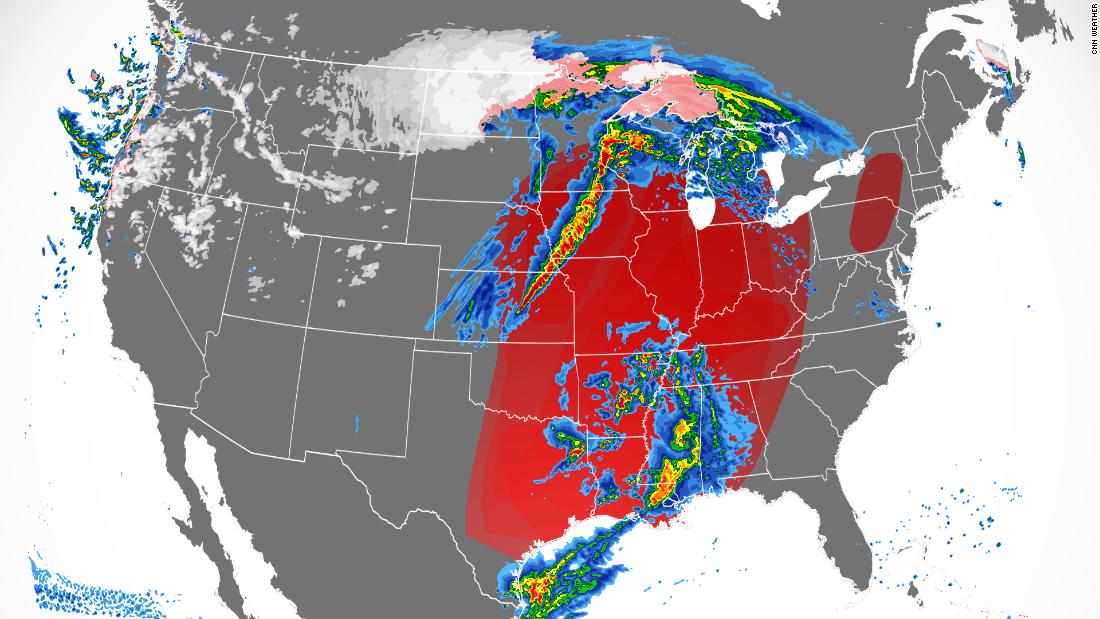 A Level 4 out of 5 “moderate” risk for severe weather is expected for nearly a million people across western and northern Iowa, with Sioux City, Ames, Mason City and Fort Dodge in the bull’s-eye where the biggest storms are likely to develop , according to the Storm Prediction Center.

Nearly 15 million more people are included Tuesday in a Level 3 out of 5 “enhanced” risk for severe weather, including those in Dallas, Kansas City, Missouri, and Omaha, Nebraska.

Still, anyone from Houston to Austin, Texas, Oklahoma City, New Orleans and Louisville, Kentucky, needs to be on the lookout for storms.

Sign up to get weekly weather alerts from CNN meteorologists

“Scattered severe thunderstorms capable of producing very large hail, damaging winds, and tornadoes should occur beginning late Tuesday afternoon and continuing through Tuesday night across a broad portion of the southern / central Plains into the Mississippi Valley,” the prediction center said. “Some of the tornadoes could be strong.”

The storm is intensifying as it moves east and combining with an abundance of moisture from an atmospheric river that’s drawing the moisture from the Gulf of Mexico.

“A potentially volatile severe thunderstorm environment will develop across a broad area of ​​the central / southern Plains into the lower / mid MS Valley by late afternoon,” the prediction center said.

Temperatures will soar Tuesday afternoon in places like Dallas, where highs could reach the upper 80s to low 90s.

This will make the atmosphere more ripe for storms to develop and become strong.

“Convection that develops in this thermodynamic environment is favored to become supercellular rapidly primarily posing a threat for very large hail (hail from the size of golfballs to baseballs) and damaging wind gusts, though tornadoes are also possible,” the National Weather Service office in Dallas said.

Read what makes a storm a supercell
Strong southerly winds are also making the environment conducive for storm formation. Winds ahead of the storms will blow at 30 to 35 mph, which also makes fire conditions difficult just west of the severe risk area.

In places a little further north, there is still a little uncertainty about when exactly the storms will start firing up.

“The current concern will be how quickly storms develop along the frontal boundary as it advances east into the late evening and overnight hours,” said the weather service office in Kansas City.

Storms are forecast to start around 9 pm CT (10 pm ET) but could rev up as late as 11 pm CT, posing a dangerous scenario of nocturnal storms.

“Ensure you have multiple ways to get warning information, specifically ones that will wake you up, such as NOAA Weather Radio and Weather Apps; which means keeping your phone ringer on tonight.”

The storms then will push east, again posing a Level 4 out of 5 “moderate” risk of severe weather Wednesday for more than 4 million people. The moderate risk includes Memphis, Tennessee, Evansville, Indiana, and Jonesboro, Arkansas.

A large Level 3 out of 5 “enhanced” risk surrounds the moderate risk, stretching from northern Louisiana to northern Indiana. Places like Indianapolis, Nashville, Louisville and St. Louis are all in this zone. Other cities like Chicago, New Orleans, Dallas and Detroit also will remain under the threat of storms Wednesday.

“Damaging winds, some of which could be significant, several tornadoes (some strong), and large to very large hail will likely occur,” the prediction center said in its forecast discussion.

Wind gusts of more than 75 mph are possible as well, which could lead to downed trees and numerous power outages.

By Thursday, the storms push east with a much drier, more pleasant air mass behind them.

Late season blizzard slams parts of the US

The storm system will bring quite a different setup to parts of the northern Plains, with blizzard warnings up for portions of the Dakotas and Montana. Whiteout conditions will make travel nearly impossible in some places.

“Snow accumulations of up to 36 inches are possible in parts of north central North Dakota, with widespread wind gusts up to 50 mph across the area,” said the National Weather Service office in Bismarck, North Dakota.

“We do get blizzards in April, but one of this intensity is quite rare,” Jeff Schild, meteorologist for the weather service office in Bismarck, told CNN. “The last one of note for this level of intensity was April 4-7 in 1997.”

Much of the region is in drought conditions, so the snowfall will be beneficial, Schild said. “Right now we are only sitting at 34.3 inches of snow for the year,” he said.

Bismarck could even break records for the most snow in a multiday event.

There’s still uncertainty about where the heaviest bands of snow will set up, but regardless, there will be widespread, impressive snowfall rates, the Bismarck forecast office said in its forecast discussion.

“Snow will become heavy across much of the west and central, with snow rates of over 1” per hour likely to be sustained through much of today, “it said.” The falling snow with strong winds will lead to whiteout conditions, especially with the enhanced snowfall rates. “

The snow will end by Thursday, and very cold temperatures will follow.

“Overnight lows will drop into the teens in western North Dakota, and with the strong winds, wind chills will be in the single digits above to below zero, quite chilly for mid April,” said the Bismarck weather service office.

As high temperatures only make it into the 20s on Friday – about 30 degrees below normal – this region could break low maximum temperature records.