For nearly five years, Netflix has had simple thumbs-up and thumbs-down icons to express viewing preferences and help its algorithms provide better recommendations. However, in surveys, people frequently expressed that this binary type of voting did not really do their taste justice.

What if they were really, truly in love with a show?

Tasked to come up with a better way to express such levels of adoration, the streaming service recently explored the idea of ​​adding a heart icon to the Netflix app. The heart seemed like an obvious choice. It’s a universal sign of love, and widely used in apps like Instagram and Twitter.

But Netflix would not be Netflix if the company did not put features like these through some rigorous testing; in this case, it took nearly a year. During that time, the company discovered that hearts were actually not the best-performing feature after all, and instead settled on a new two-thumbs-up option that is being made available to its subscribers worldwide this week.

Here’s how that change of heart came about.

Finding a universal symbol for love

Netflix rolled out its new two-thumbs-up feature across its mobile and smart TV apps as well as its website Monday. Subscribers are being advised that this type of feedback directly affects future recommendations. A thumbs-down means that a title will not get suggested again; a thumbs-up will result in Netflix recommending similar content. Two thumbs up means that “we know you’re a true fan,” as the Netflix mobile app puts it.

The company kicked off its work on the feature about a year and a half ago based on feedback it was getting in surveys and research interviews from its subscribers. “We were hearing from members that ‘like’ and ‘dislike’ was not sufficient,” said Christine Doig-Cardet, who leads the company’s personalized UI product innovation team. “There were some shows that they really, really, really enjoyed. Differentiating between what they love and what they like was important. ”

Once the decision was made to solve this problem, Netflix kicked off a series of design sprints to come up with visuals for this level of fandom. Some of the early ideas included the heart, an applause icon, shooting stars and others. Designers also consulted with the company’s globalization team to find an icon that was truly universal. “The design team and the globalization team really [homed] in on the symbols that connote love, ”said Netflix director of Product Design Ratna Desai. “We wanted it to be very precise, very concise, because we wanted this to be a very quick interaction.”

Netflix tested a number of different reactions that could reflect a viewer’s interest in a show.

At the same time, Netflix continued to query its subscribers, who had a different suggestion. “We had a lot of interviews and surveys, [and] the heart was not really resonating, ”Doig-Cardet said. “The idea that came from members was: Why do not you just try two thumbs up?”

At that point, two front-runners emerged. The heart seemed like an obvious choice, but two thumbs up also seemed to work well with Netflix’s existing iconography. Plus, as anyone who has ever read a review by the late Roger Ebert knows, it has long signified a vote of confidence for great entertainment.

Going with what its subscribers wanted seemed like a good idea, giving credence to the two thumbs up. But what if those subscribers were wrong?

“Some people can speak loudly,” Doig-Cardet said. “But when you look at the whole picture, talk to a lot of different members and see how they engage with the different features, it does not actually always [match] the initial loud voices. ”

Netflix has long tried to figure out how to best collect member-based content ratings, and dealing with those loud voices has been challenging. In its early days, Netflix used to offer a five-star rating system, similar to the way people rate their Uber drivers.

At the time, Netflix displayed an average of those ratings on its website to convey how well-liked a title was among subscribers. This resulted in some titles having 4.5 stars, or other fractions, leading people to wonder why they could not rate in half-star increments as well.

Thousands of people told the company in surveys that they wanted this level of granularity, but Netflix employees were not sure whether those opinions reflected how people actually used the service. To make sure it was not falling for the opinions of a vocal minority, Netflix resorted to something that has become a key part of its product development tool chest over the years: an A / B test.

In the case of the half-star test, the results were obvious: Ratings dropped significantly when people were asked to provide feedback with that level of granularity. In other words: A / B testing proved the loudest voices wrong.

Netflix repeated this kind of testing when it completely replaced the five-star ratings with thumbs in 2017. In A / B tests ahead of that change, the company saw ratings activity increase by 200% with thumbs-up and thumbs-down icons. Part of the issue was that these icons were just simpler, but a closer look at the data also revealed that they tended to be more accurate: People would aspirationally rate titles five stars that they deemed worthy of that status, including award-winning documentaries that would then linger unwatched in their queues for months. At the same time, they would frequently binge on reality TV shows that they themselves had rated just three stars.

The moment of truth: Hearts or thumbs?

Now, Netflix is ​​ready to again add a bit more complexity to those ratings. That’s in part because media consumption habits and app interfaces have changed across the board. “People are using Netflix in the context of their overall lives,” Desai said. “They are interacting with Instagram, with various social networks, with ride-share apps.” Some of the interaction patterns of those apps and experiences were not easily applicable to Netflix, which is primarily used on TVs and has a much bigger focus on leanback entertainment than, for instance, Instagram. “But there are a few levers that our members are now asking for that they did not in the past,” she said.

Still, there were some unresolved questions, including what would perform better: Hearts or thumbs? And would either actually have a lasting impact beyond addressing those loud voices in surveys and other forms of qualitative research?

“We have been in situations where we may hear very strong points of view in a qualitative setting that go against what we find out in A / B testing,” Desai said. “That’s when the fun begins.” 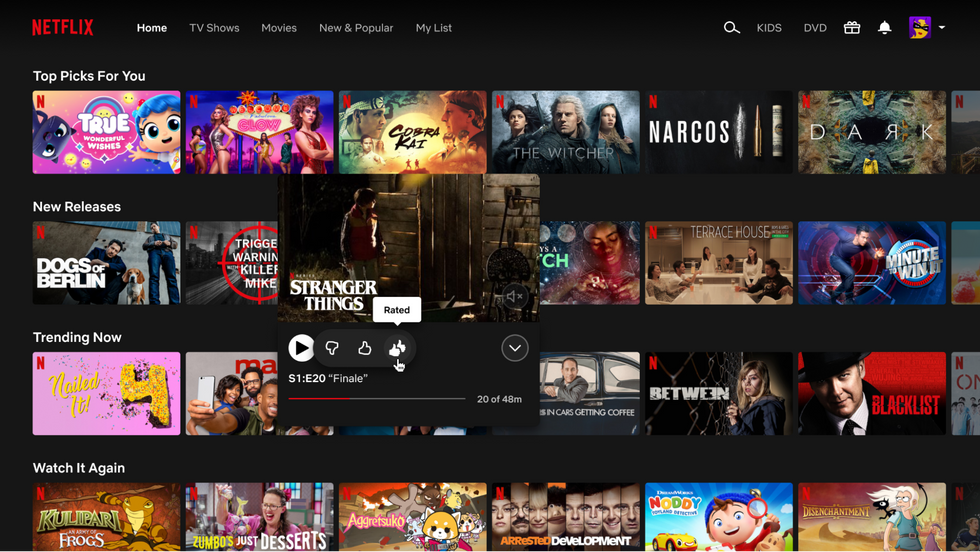 Netflix began a series of A / B tests for the new ratings feature last summer.Image: Netflix.

Netflix began a series of A / B tests for the new ratings feature last summer, trialing both the heart and the two-thumbs-up option. At the same time, the company continued to query subscribers, including those enrolled in the tests, to see whether the new features were actually providing value.

Testing of the feature extended into the fall, as the teams working on it wanted to make sure they got things right. “We do not rush a test,” Doig-Cardet said. “Sometimes, there’s this impetus to just launch early and break things and all of that. That’s not [our] approach. ” One reason for conducting A / B tests over weeks or even months is to let people get used to a feature and see whether engagement stays high, or whether people are attracted to the novelty of a feature, and then get bored with it.

In the end, the numbers were clear: Providing additional feedback worked. “We saw a very big lift in engagement because people had a new way to talk to us,” Desai said. That lift was a lot bigger with the two thumbs up than with the heart, which was a surprise, as people within Netflix had expected the heart to win.

Those kinds of unexpected outcomes are what make A / B testing so valuable, Doig-Cardet said. “If we were not surprised, we would be doing something wrong,” she said. “We would be validating our own assumptions, rather than letting numbers directly what is a better experience.”

Constant testing, even if it can spoil the big reveal

Netflix’s extensive use of A / B testing has been well-documented over the years, including by its own data science team. The company is constantly testing a number of different features with subsets of its audience. Basically, if you’re a Netflix subscriber, there’s a decent chance that you’re enrolled in some kind of test right now.

Some of these tests are for obvious interface tweaks, and some are related to under-the-hood codec or infrastructure changes. In fact, Netflix does so many tests that members can be enrolled in more than one test at the same time, which is why the company developed an entire experimentation platform that helps its data science team avoid testing conflicts and make sense of all the collected data . (Netflix does offer members a chance to opt out of tests through their account settings.)

However, the development of the new two-thumbs-up feature also shows that A / B testing alone is not enough. Without also talking directly to subscribers, the company would have prioritized the development of the heart icon and would not have given two thumbs up a chance to prove itself in A / B tests. “We take this multipronged approach of looking at a lot of different inputs,” Doig-Cardet said. “We’m capturing insights from our customer service, from surveys, from interviews that we’re doing, and using all of that to inform [what] we should be investing in and testing. ”

Both surveys and A / B tests do come with a risk of exposing future features to the public eye. Subscribers frequently post about new things they spotted in the app, and reporters tend to jump on those stories to shine a light on the company’s roadmap. For Netflix, that’s just a cost of doing business. “We’re comfortable making that trade-off of providing early visibility because we want to make sure it’s working for our members,” Doig-Cardet said.

“In previous places I worked, there’s this amazing unveiling of the feature, with the campaign and all of that,” Desai added. Netflix instead operates a bit more in the open, which includes testing new and unannounced features with tens of thousands of members.

“This is our bread and butter,” Desai said. “It’s our secret sauce to how we innovate.”