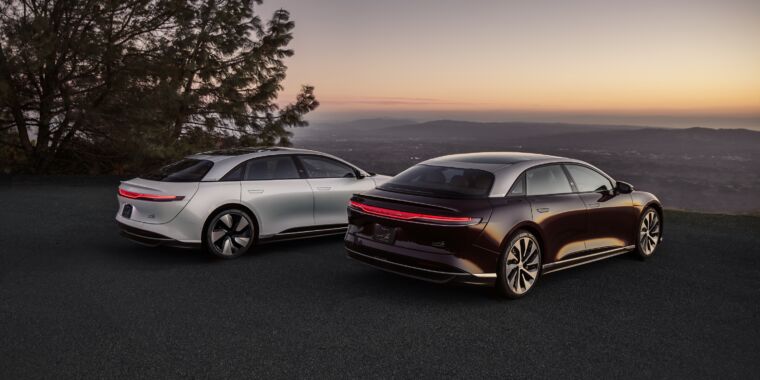 On Tuesday, Lucid Motors added a new version of its electric sedan to its lineup. It’s called the Lucid Air Grand Touring Performance, and at the not-inconsiderable price of $ 179,000 it slots above the already superlative-laden $ 139,000 Lucid Air Grand Touring, offering a lot more power, albeit at the cost of about 13 percent of its range.

Originally founded in 2007 as Atieva — an electric vehicle technology development company — Lucid rebranded and shifted its efforts to create and sell EVs. We got our first look at one of those in 2017, a curvy sedan with an interesting interior called the Air.

Originally Lucid had hoped to put the Air into production within a couple of years, but this was before investors went EV-mad, and progress stalled for a while until the company secured a billion-dollar investment from Saudi Arabia’s sovereign wealth fund.

2020 came and went without the Air going into production, but the infusion of cash from the repressive petrostate looking to burnish its image did allow Lucid to build out its factory in Casa Grande, Arizona. Despite the pandemic and everything that has followed, deliveries of the Air did start in late 2021.

That version was called the Air Dream Edition and was limited to 520 cars, with between 933-1,111 hp (696-828 kW) depending on the exact configuration. Lucid’s original plan was that its most expensive, most powerful model to follow the Dream Edition would be the Air Grand Touring, an 800-hp (597 kW) version with 516 miles of range. But it seems there is still untapped demand for a really fast Lucid Air, and so it’s adding the new Air Grand Touring Performance.

However, fans of Lucid from the early days will be disappointed that the planned single-engine $ 60,000 entry-level version will now cost at least $ 80,000. Production of that car was meant to start this year, but perhaps 2024 is more likely.