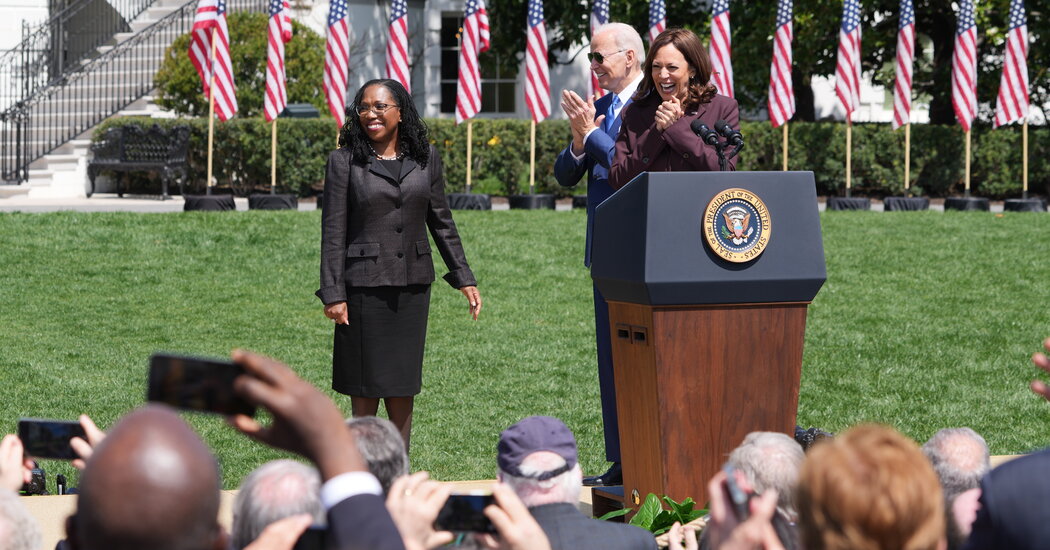 WASHINGTON – President Biden on Friday basked in the confirmation of Judge Ketanji Brown Jackson to the Supreme Court, hailing what he called a moment of “real change” in American history as he and his supporters celebrated the ascension of the first Black woman to the court .

Flanked by Judge Jackson and Vice President Kamala Harris – the first Black woman to hold her role and whom he called the first “smart” decision of his presidency – Mr. Biden said the judge’s confirmation had changed not only his own trajectory but the course of American life itself.

In her remarks, Judge Jackson called her confirmation “the greatest honor of my life.” She recalled substantive meetings with 97 senators and thanked them for their role in the nomination process, providing a graceful coda to hours of televised interactions with senators who had often acted emotionally as they questioned her.

Judge Jackson again pledged judicial independence. “I’ve also spent the better time of the past decade hearing thousands of cases and writing hundreds of opinions,” she said. “At every instance, I have done my level best to stay in my lane and to achieve a result that is consistent with my understanding of the law and with the obligation to rule independently, without fear or favor.”

White House officials said they had invited the judge’s family, all current and former Supreme Court justices and three Republicans – Senators Susan Collins of Maine, Lisa Murkowski of Alaska and Mitt Romney of Utah – who voted with Democrats on Thursday to confirm Judge Jackson, lending a modicum of bipartisanship to an otherwise bitterly polarized process. The Republican senators were not in attendance at the event on Friday.

A spate of positive coronavirus cases among lawmakers and administration officials this week whittled down the prospective guest list. Ms. Collins said on Thursday that she had tested positive, as did several Democrats who had been near Mr. Biden in recent days, including Speaker Nancy Pelosi. The president was last tested on Wednesday evening, a White House official said on Friday morning, hours before the ceremony.

Judge Jackson’s confirmation is a major victory for Mr. Biden, who once revived his flagging presidential campaign by pledging to nominate a Black woman to the Supreme Court if elected. He and his advisers were intent on celebrating a promise fulfilled.

Jen Psaki, the White House press secretary, told reporters on Thursday that Mr. Biden’s experience as the chairman of the Senate Judiciary Committee “gave him historically exceptional preparation” for a successful nomination process.

“She began her prep work immediately, starting the day after she was announced, and promised to meet with anyone who wanted to and honored it, meeting with 97 senators over the course of her consultations,” Ms. Psaki said.

Mr. Biden said on Friday that Judge Jackson had endured “verbal abuse” and “vile” personal attacks but had shown poise through more than 20 hours of questioning in confirmation hearings that had at times turned bruising.

At the White House on Thursday, Mr. Biden and Judge Jackson watched the vote together from the Roosevelt Room. The White House shared video from the president’s Instagram account of the moment when the two watched Ms. Harris declares the 53-to-47 vote in favor of the judge’s confirmation.

“All right!” Mr. Biden exclaimed, pumping his fist and wrapping his other arm around Judge Jackson, who clasped her hands and smiled. “OK.”

The president then took a selfie with the judge in front of a television screen displaying the final vote count. Ms. Psaki said on Thursday that reporters were not allowed into the room because the moment was a private one and the South Lawn party was for a wider audience.

Judge Jackson will not be sworn in for months. Justice Stephen G. Breyer, whom she will replace on the bench, has said he plans to retire this summer, at the end of the current term.

Judge Jackson was born in Washington, DC, and grew up in Miami. She graduated from Harvard College and Harvard Law School, Justice Breyer’s alma mater, and went on to clerk for him during the 1999-2000 Supreme Court term.