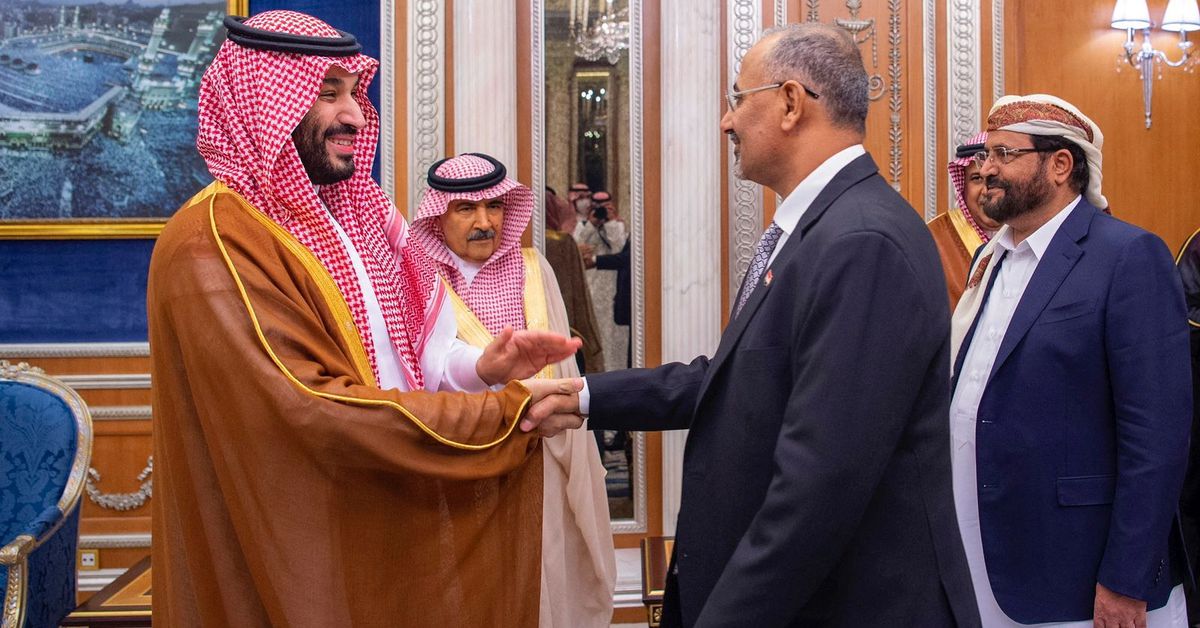 ADEN, April 7 (Reuters) – Yemen’s president delegated power to a presidential council and dismissed his deputy on Thursday as Saudi Arabia moved to strengthen an anti-Houthi alliance amid UN-led efforts to revive negotiations to end the seven-year war.

Riyadh announced $ 3 billion in financial aid to the Saudi-backed government after the announcement by President Abd-Rabbu Mansour Hadi. It called for talks with the Houthis who control the north and have been battling the Saudi-led coalition.

Yemen’s warring sides, in a major breakthrough, had agreed on a two-month truce that began on Saturday. The deal eased a coalition blockade on areas held by the Houthis, who ousted Hadi’s government from the capital, Sanaa, in late 2014. read more

“I irreversibly delegate to the Presidential Leadership Council my full powers in accordance with the constitution and the Gulf Initiative and its executive mechanism,” Hadi, who is based in Riyadh, said on state television.

Hadi took the helm of a crumbling state a decade ago in a Gulf-backed transition plan after protests that brought down President Ali Abdullah Saleh, who was later killed. read more

Analysts say the new council aims to unify anti-Houthi ranks by giving more parties a seat at the table. With Hadi effectively out of the equation and his controversial deputy dismissed, the hope is the Houthis may also be more amenable.

Houthi chief negotiator Mohammed Abdulsalam criticized the move as a farce and a “desperate attempt to restructure the ranks of mercenaries to push them towards further escalation”.

Riyadh, which has struggled to exit the war in Yemen, urged the council to negotiate with the Iran-aligned Houthis under UN auspices “for a final and comprehensive solution”.

US Secretary of State Antony Blinken welcomed the council’s formation and said Washington “remains committed to helping advance a sustainable, inclusive resolution to the conflict in Yemen.”

Saudi Crown Prince Mohammed bin Salman was shown in a video on state media meeting with the eight-member council, led by Rashad Al-Alimi, who has close ties with both Riyadh and major Yemeni bloc the Islamist Islah party.

The new body includes several leaders of United Arab Emirates-backed factions, including Aidarous al-Zubaidi of the separatist Southern Transitional Council, which distrusts Islah and vied with Hadi’s government for control of Aden.

“This is an attempt, perhaps a last ditch effort, to reconstitute something resembling unity within the anti-Houthi alliance. The problem is that it is unclear how these various individuals, many of whom have diametrically opposing views, can work together,” Gregory Johnsen, a former member of the UN Panel of Experts on Yemen, said on Twitter.

Dismissed Vice President Ali Mohsen al-Ahmar, an Islamist-leaning general, is resented by the Houthis for military campaigns in their northern stronghold and by some southerners for his role in the 1994 north-south civil war.

Sanaa resident Maamr Kabody told Reuters he hoped the new council would “seek peace and cooperation … but we will wait and see.”

The war has killed tens of thousands, devastated the economy and pushed Yemen to the brink of famine. The central bank split into rival authorities and the riyal’s depreciation in the government-held south has sparked protests.

Saudi Arabia and the UAE will each inject $ 1 billion into Yemen’s central bank and the kingdom will grant an additional $ 1 billion for oil derivatives and development. read more

Riyadh, which last deposited funds into the central bank in 2018, also said it would give $ 300 million to the UN aid response, which in March raised less than a third of the $ 4.27 billion sought. read more

The United Nations is pushing for measures to stabilize the economy and launch inclusive political negotiations.

The conflict is widely seen as a proxy war between Saudi Arabia and Iran. The Houthis say they are fighting a corrupt system and foreign aggression.