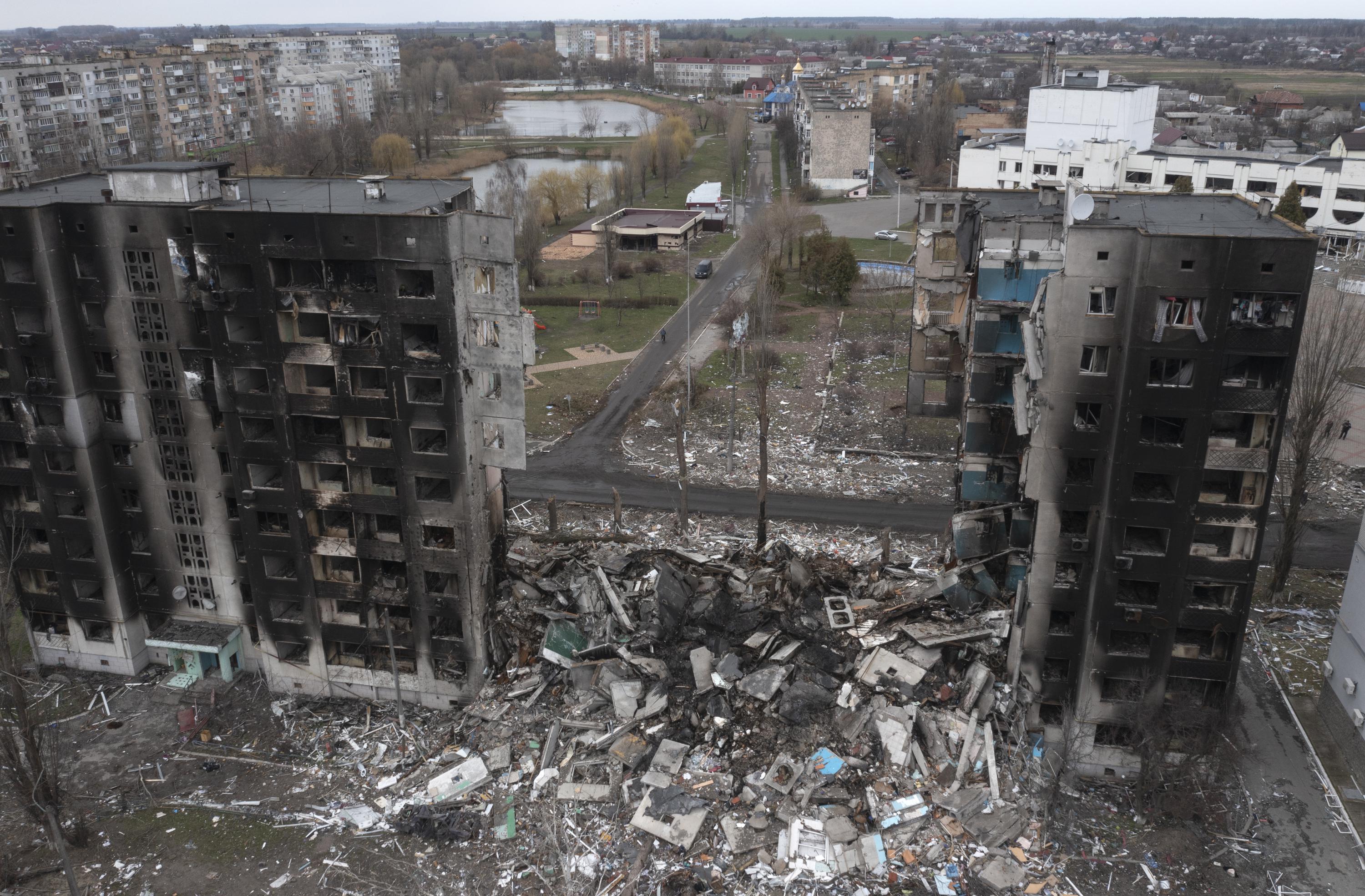 KYIV, Ukraine (AP) – Ukraine told residents of its industrial heartland to leave while they can still and urged Western nations to send “weapons, weapons, weapons” Thursday after Russian forces withdrew from the shattered outskirts of Kyiv to regroup for an offensive in the country’s east.

In Brussels, Ukrainian Foreign Minister Dmytro Kuleba urged NATO to provide more weapons for his war-torn country to help prevent further atrocities like those reported in Kyiv’s northern suburbs. Ukrainian authorities are working to identify hundreds of bodies they say were found in Bucha and other towns after Russian troops withdrew and to document what they say were war crimes.

“My agenda is very simple – it’s weapons, weapons and weapons,” Kuleba said as he arrived at NATO headquarters for talks with the military organization’s foreign ministers about Ukraine’s fight to defend itself.

“The more weapons we get and the sooner they arrive in Ukraine, the more human lives will be saved,” he said.

Some NATO nations worry they may be Russia’s next target, but the alliance is striving to avoid actions that might pull any of its 30 members directly into the war. Still, he NATO Secretary-General Jens Stoltenberg urged member nations to send Ukraine more weapons, and not just defensive arms.

“Ukraine is fighting a defensive war, so this distinction between offensive and defensive weapons does not actually have any real meaning,” he said.

Western countries have provided Ukraine with portable anti-tank and anti-aircraft weapons, but they have been reluctant to supply aircraft or tanks plus any equipment that Ukrainian troops would have to be trained to use.

A US defense official speaking on condition of anonymity said Russia had pulled all of its estimated 24,000 or more troops from the Kyiv and Chernihiv areas in the north, sending them into Belarus or Russia to resupply, reorganize and likely prepare to return to fight in the east.

Growing numbers of Putin’s troops, along with mercenaries, have been reported moving into the Donbas, where Russia-backed separatists have fought Ukrainian forces for eight years and control two areas.

Ahead of its Feb. 24 invasion, Moscow recognized the Luhansk and Donetsk areas as independent states. Military analysts have said Putin also could be seeking to expand into government-controlled parts of the Donbas.

Donetsk Gov. Pavlo Kyrylenko said at least five civilians were killed and another eight were wounded by Russian shelling on Wednesday. Ukrainian Deputy Prime Minister Iryna Vereshchuk urged civilians to evacuate to safer regions before it was too late.

“Later, people will come under fire, and we will not be able to do anything to help them,” Vereshchuk said.

Another Western official, also speaking on condition of anonymity to discuss intelligence estimates, said it may take Russia’s battle-damaged forces as much as a month to regroup for a major push on eastern Ukraine.

Oleksandr Shputun, spokesman for the General Staff of the Ukrainian Armed Forces, reported Thursday that near Donbas, Ukraine’s second-largest city, Kharkiv, remained blocked. He said Russian forces were also carrying out “brutal measures” in the southern Kherson region, which they hold.

In his nightly address to the nation late Wednesday, Ukrainian President Volodymyr Zelenskyy said Ukraine, too, was preparing for battle.

Ukrainian authorities said the bodies of at least 410 civilians were found in towns around Kyiv, victims of what Zelenskyy has portrayed as a Russian campaign of murder, rape, dismemberment and torture. Some victims had apparently been shot at close range. Some were found with their hands bound.

Western officials warned that similar atrocities were likely to have taken place in other areas occupied by Russian troops. Zelenskyy accused Russian forces of trying to cover up war crimes in areas still under their control, “afraid that the global anger over what was seen in Bucha would be repeated.”

“We have information that the Russian troops have changed tactics and are trying to remove the dead people, the dead Ukrainians, from the streets and cellars of territory they occupied,” he said in a nighttime video address. “This is only an attempt to hide the evidence and nothing more.”

Switching from speaking Ukrainian to Russian, Zelenskyy urged ordinary Russians “to somehow confront the Russian repressive machine” instead of being “equated with the Nazis for the rest of your life.”

He called on Russians to demand an end to the war, “if you have even a little shame about what the Russian military is doing in Ukraine.”

In reaction to the alleged atrocities outside Kyiv, the US announced sanctions against Putin’s two adult daughters and said it is toughening penalties against Russian banks. Britain banned investment in Russia and pledged to end its dependence on Russian coal and oil by the end of the year.

The US Senate planned to take up legislation Thursday to end normal trade relations with Russia, paving the way for higher tariffs on some imports, and to codify President Joe Biden’s executive action banning imports of Russian oil.

The European Union is also expected to take additional punitive measures, including an embargo on coal.

The Kremlin has insisted its troops have committed no war crimes and alleged the images out of Bucha were staged by the Ukrainians.

Bodies were still being collected in the city. On Wednesday, The Associated Press saw two in a house in a silent neighborhood. From time to time, the muffled boom of workers clearing the town of mines and other unexploded ordnance interrupted the silence.

Workers at a cemetery began to load more than 60 bodies into a grocery shipping truck for transport to a facility for further investigation.

Police said they found at least 20 bodies in the Makariv area west of Kyiv. In the village of Andriivka, residents said the Russians arrived in early March, taking locals’ phones and detaining and then releasing some people. Others with unknown fates. Some described sheltering for weeks in cellars normally used for storing vegetables.

“First we were scared, now we are hysterical,” said Valentyna Klymenko, 64. She said she, her husband and two neighbors weathered the siege by sleeping on stacks of potatoes covered with a mattress and blankets. “We did not cry at first. Now we are crying. ”

In the southern port city of Mariupol, Mayor Vadym Boichenko said that of the more than 5,000 civilians killed during weeks of Russian bombardment and street fighting, 210 were children. Russian forces bombed hospitals, including one where 50 people burned to death, he said.

Boichenko said more than 90% of the city’s infrastructure was destroyed. The attacks on the strategic city on the Sea of ​​Azov have cut off food, water, fuel and medicine and pulverized homes and businesses.

British defense officials said 160,000 people remained trapped in the city, which had a prewar population of 430,000. A humanitarian relief convoy accompanied by the Red Cross has tried to get into the city for days, without success.

Capturing Mariupol would allow Russia to secure a continuous land corridor to the Crimean Peninsula, which Moscow seized from Ukraine in 2014.

Oleksandr Stashevskyi and Cara Anna in Bucha, Ukraine, Edith M. Lederer at the United Nations, Yuras Karmanau in Lviv, Ukraine, and Associated Press journalists around the world contributed to this report.