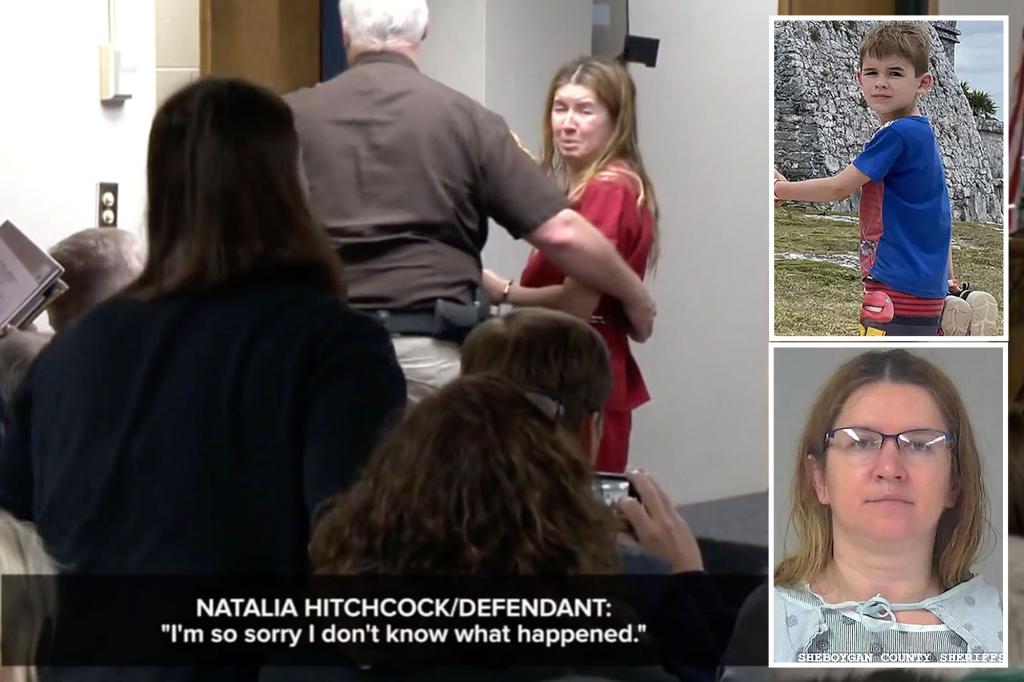 A Russian mom in Wisconsin killed her 8-year-old son and threatened to slaughter the rest of her family – “amped up” by paranoia and terror over her homeland’s ongoing war on Ukraine, authorities said.

Natalia Aleksandrovna Hitchcock, 41, strangled little Oliver on March 30, days after also trying to drown his 11-year-old brother in the bath, according to a criminal complaint filed Tuesday in Sheboygan County.

The older boy had found his brother’s lifeless body on the floor of his bedroom while “his mother was on the bed with a big knife,” according to the complaint into first-degree murder and attempted murder charges.

The surviving boy’s screams woke their dad from a nap, and he raced to make doomed attempts to save Oliver, who was pronounced dead two days later, the legal papers said.

While he gave CPR, his wife – who had no history of mental health problems – was “walking around the apartment with a knife, dazed, saying she was going to kill everyone in the house,” the complaint said.

The mom also tried to overdose on painkillers and stabbed herself in the chest in a bid to “cut her heart,” she later told cops.

“When asked if Hitchcock had any mental health concerns, [the husband] said, ‘She does now’ ”- and detailed her paranoia over the Kremlin’s ongoing war on Ukraine.

The husband told cops that he “was worried about Hitchcock’s mental state of mind as she watched TV with the war between Russia and Ukraine.”

Her parents were still in Russia and she was furious that she could not book flights to get home to see them, the complaint said.

In the days before killing her son, Hitchcock asked her husband to stay home from work and “buy survival gear such as a camping stove and fuel and also wanted to buy knives and guns,” the document said.

The husband “said no to the knives and guns,” but bought food and other supplies to make his wife “feel safe,” the documents said.

“He said that he felt the war between Russia and Ukraine amped up Hitchcock more than ever and that she started to drink” vodka.

She was terrified that “people were going to be coming from a bigger city to attack them” or even sell them on the dark web, the husband allegedly said.

Hitchcock later admitted similar fears when interviewed by cops, telling them that she had been unable to sleep and feared the “Russian government was going to take her children and abuse them.”

“She also said that people had been looking at her strange and felt that people looked at her as a Russian spy, which caused her to feel that social workers were going to take her kids from her,” the complaint said.

She confirmed killing her son “because she did not want to see him be abused,” the complaint alleged.

She said when she previously held her 11-year-old son’s head under the water in the bath it was “to scare him so that he would understand his life was in danger.”

“She said she told the boys they needed to wake up and needed to see what was going on around them,” the complaint said.

Hitchock was already in Sheboygan County Jail when officers visited to tell her that her son had died two days after the attack.

“Well, I guess I accomplished what I set out to do then,” she replied in a “calm tone,” before “she began to cry softly,” the complaint said.

She again said she did it because she felt little Oliver “would be better off dead” rather than be abused over the Russian war, the complaint alleged.

Hitchcock appeared in Sheboygan County Court on Tuesday, looking back to speak to her “visibly emotional,” husband, TMJ4 said.

“I’m so sorry. I do not know what happened, ”Hitchcock told him, according to the station.

She is being held on $ 1 million bond ahead of her next court hearing scheduled for Thursday.