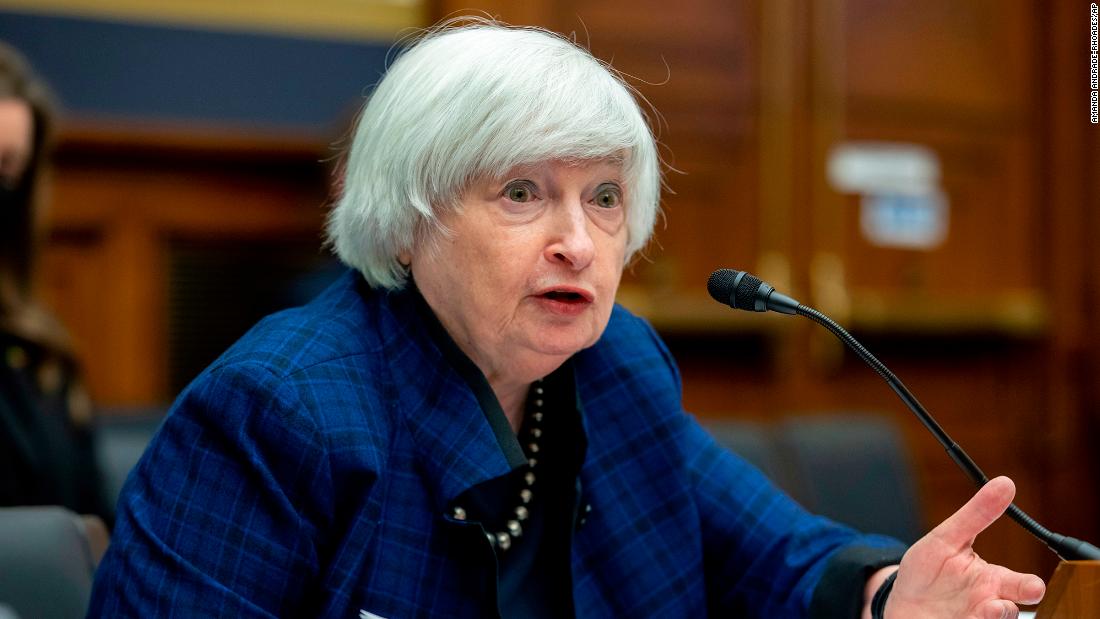 “Russia’s actions represent an unacceptable affront to the rules-based, global order, and will have enormous economic repercussions in Ukraine and beyond,” Yellen said during her testimony before the House Financial Services Committee.
The war – and the political response of the West, mostly through sanctions – has already sent food and energy prices soaring and has raised concerns about an economic slowdown or even recession during a time of already rampant inflation around the world. In the United States, for example, inflation is at a level not seen in 40 years.

Yellen described Russia’s invasion as “brutal and unprovoked” on Wednesday, and emphasized the Treasury Department is committed to holding Russia “accountable for its actions.”

On Wednesday, the Biden administration imposed new sanctions on Russian banking institutions – Sberbank and Alfa Bank – as well as individuals, including President Vladimir Putin’s adult daughters. These new sanctions followed horrific images of carnage and possible war crimes in the Ukrainian city of Bucha.
But the fact that America’s European partners remain heavily reliant on Russian energy exports limits what the West can do. The United States intends to inflict the maximum sanctions pain possible against Russia while taking care not to inflict undue pain on its allies, Yellen said repeatedly on Wednesday.

“The issue with blocking oil exports from Russia is that many countries, especially in Europe, are very dependent on that oil,” she said. “And we’re likely going to see skyrocketing prices if we did put a complete ban on oil.”

Germany, for example, would be left out in the cold – literally – if it stopped importing Russian gas. Germany is Russia’s biggest energy customer in the European Union, which depends on Moscow for about 40% of its natural gas.

“Globally, spillovers from the crisis are heightening economic vulnerabilities in many countries that are already facing higher debt burdens and limited policy options as they recover from Covid-19,” Yellen said.

Energy prices have been driven higher by concerns about supply from Russia, the number one exporter of crude oil in the world.

“We are witnessing the vulnerability that comes from relying on one fuel source or one trade partner,” Yellen said, which is why it is imperative to diversify energy sources and suppliers. “

But it’s not just about energy. Together, Russia and Ukraine account for nearly one-third of the world’s wheat exports.

“Russia’s invasion disrupted the flow of food for millions of people around the world and caused prices to spike,” the Treasury Secretary said.

Meanwhile, Yellen was cagey in response to lawmakers’ questions about a potential conflict between China and Taiwan and what a US response to that might look like.

“Certainly we are concerned about Taiwan and we will act appropriately,” she said.

–CNN’s Betsy Klein and Kevin Liptak contributed to this report.