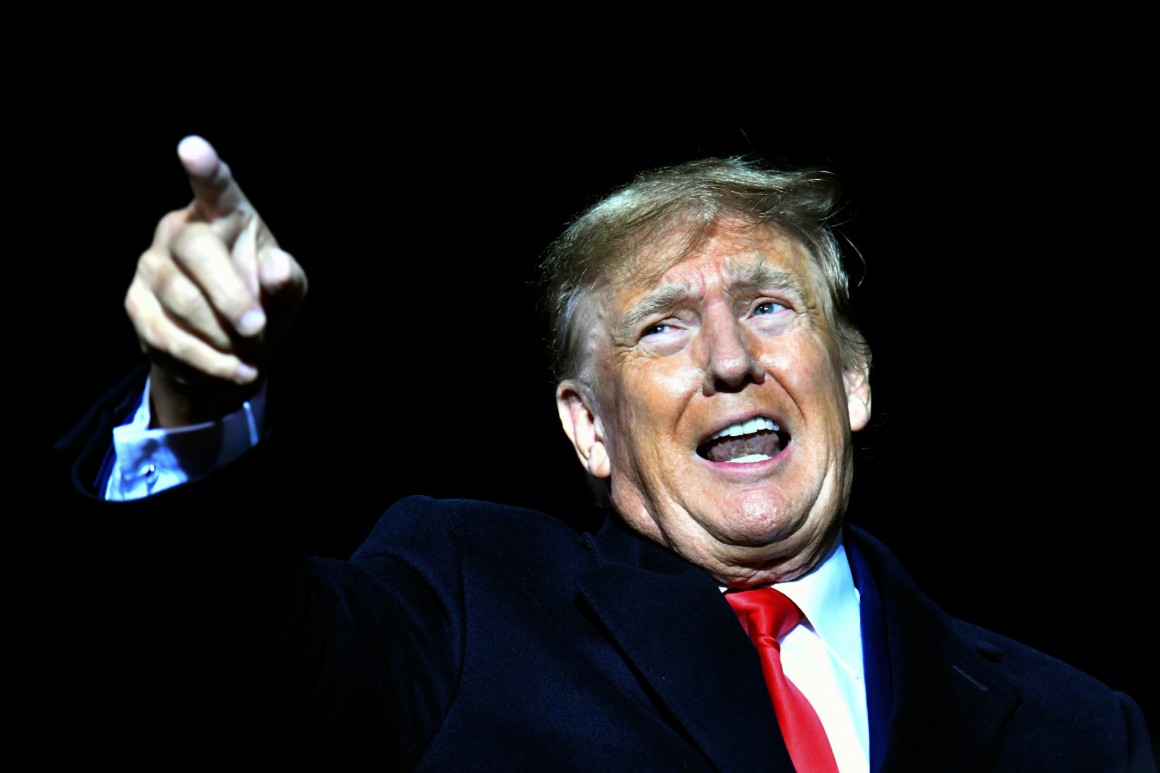 Carter’s sweeping and historic ruling came as he ordered the release to the House’s Jan. 6 committee of 101 emails from Trump ally John Eastman, rejecting Eastman’s effort to shield them via attorney-client privilege.

Eastman used the email account of his former employer, Chapman University, to discuss political and legal strategy related to efforts to overturn the 2020 election and had sued the select committee to prevent them from obtaining the emails from the school.

Carter, who sits in federal court in California, said that the plan Eastman helped develop was obviously illegal and that Trump knew it at the time, but pushed forward with an effort he says would have effectively ended American democracy.

“If Dr. Eastman and President Trump’s plan had worked, it would have permanently ended the peaceful transition of power, undermining American democracy and the Constitution, ”Carter wrote. “If the country does not commit to investigating and pursuing accountability for those responsible, the Court fears January 6 will repeat itself.”

The remarkable ruling may be the first in history in which a federal judge determined a president, while in office, appeared to commit a crime. The decision has no direct role in whether Trump will be charged criminally but could increase pressure on the Justice Department and its chief, Attorney General Merrick Garland, to conduct an aggressive investigation that could lead to such charges.

Thus far, Garland has promised to try legal violations related to Jan. 6 “at any level,” but there have been virtually no outward signs that the Justice Department is investigating Trump or his top advisers over their roles in instigating the Capitol attack or otherwise scuttling or delaying the electoral-vote-tallying session.

Justice Department spokespeople did not immediately respond to requests for comment on the ruling.

Eastman’s strategy centered on pressuring then-Vice President Mike Pence to single-handedly overturn the election when Congress convened on Jan. 6 to count electoral votes. Eastman urged Pence to simply declare the election in dispute and send the process back to GOP-controlled state legislatures, who could then replace Joe Biden’s electors with Trump’s. Pence resisted that push, and his aides argued fiercely that the plan was plainly illegal.

Carter ruled that the efforts by Trump and Eastman were obviously contrary to a federal law, the Electoral Count Act, which has governed the counting of electoral votes since 1887. Eastman premised his plan on a belief that the 135-year-old law was unconstitutional and urged Pence to simply ignore aspects of it he viewed as inconvenient. Carter said the recourse to oppose the Electoral Count Act was in court, not “a last-ditch attempt to secure the Presidency by any means.”

“Our nation was founded on the peaceful transition of power, epitomized by George Washington laying down his sword to make way for democratic elections,” Carter wrote in a 44-page ruling. “Ignoring this history, President Trump vigorously campaigned for the Vice President to single-handedly determine the results of the 2020 election. With a plan this ‘BOLD,’ President Trump knowingly tried to subvert this fundamental principle. ”

The decision also helps shore up a theory increasingly embraced by members of the Jan. 6 select committee: that Trump seized on legal strategies he knew were meritless in order to subvert the transfer of power to Joe Biden – an effort that contributed to the violence that unfolded at the Capitol. Trump allies have long assailed the select committee as a political effort led by Democrats, but Carter’s analysis now gives the committee the imprimatur of a federal court.

Among the emails Carter ordered released included documents prepared for members of Congress. Seven senators are named as the recipients of some of the documents, though they were created to persuade lawmakers, not in preparation for litigation.

Eastman had claimed attorney-client privilege over nine emails and attachments, but none of the emails listed Trump as a sender or recipient, Carter noted, and two of them blindly copied a close Trump adviser. Other emails included discussion of state-level efforts about election fraud allegations.

Perhaps the most important email in the newly disclosed batch is a memo to Trump attorney Rudy Giuliani, which was forwarded to Eastman, sketching out a series of scenarios surrounding the Jan. 6 session.

“This may have been the first time members of President Trump’s team transformed a legal interpretation of the Electoral Count Act into a day-by-day plan of action,” Carter noted. “The memo is both intimately related to and clearly advanced the plan to obstruct the Joint Session of Congress on January 6, 2021.”

Carter indicated that the memo “maps out potential Supreme Court suits and the impact of different judicial outcomes.” Though the memo was clearly related to potential litigation, Carter determined that it warranted disclosure because of the “crime-fraud exception” to attorney-client privilege.

In his ruling, Carter agreed that 10 of Eastman’s emails should remain shielded by attorney-client privilege. But he said none of the 10 appeared “pivotal” to the select committee’s investigation. Nine of them, he wrote, were about potential litigation, and the tenth captured Eastman’s “thoughts on the evening of January 6 about potential future actions.”

Carter, who sits in Los Angeles and is an appointee of President Bill Clinton, acknowledged long-shot arguments by Eastman that the 1887 law governing the tallying and certification of electoral votes was at odds with the Constitution. However, the judge said that did not permit Trump the right to defy the statute or to seek to persuade Pence to circumvent it.

“Believing the Electoral Count Act was unconstitutional did not give President Trump a license to violate it,” Carter wrote. “Disagreeing with the law entitled President Trump to seek a remedy in court, not to disrupt a constitutionally-mandated process. And President Trump knew how to pursue election claims in court – after filing and losing more than sixty suits, this plan was a last-ditch attempt to secure the Presidency by any means. ”

Eastman could try to appeal the decision to the 9th Circuit Court of Appeals and, from there, to the Supreme Court.