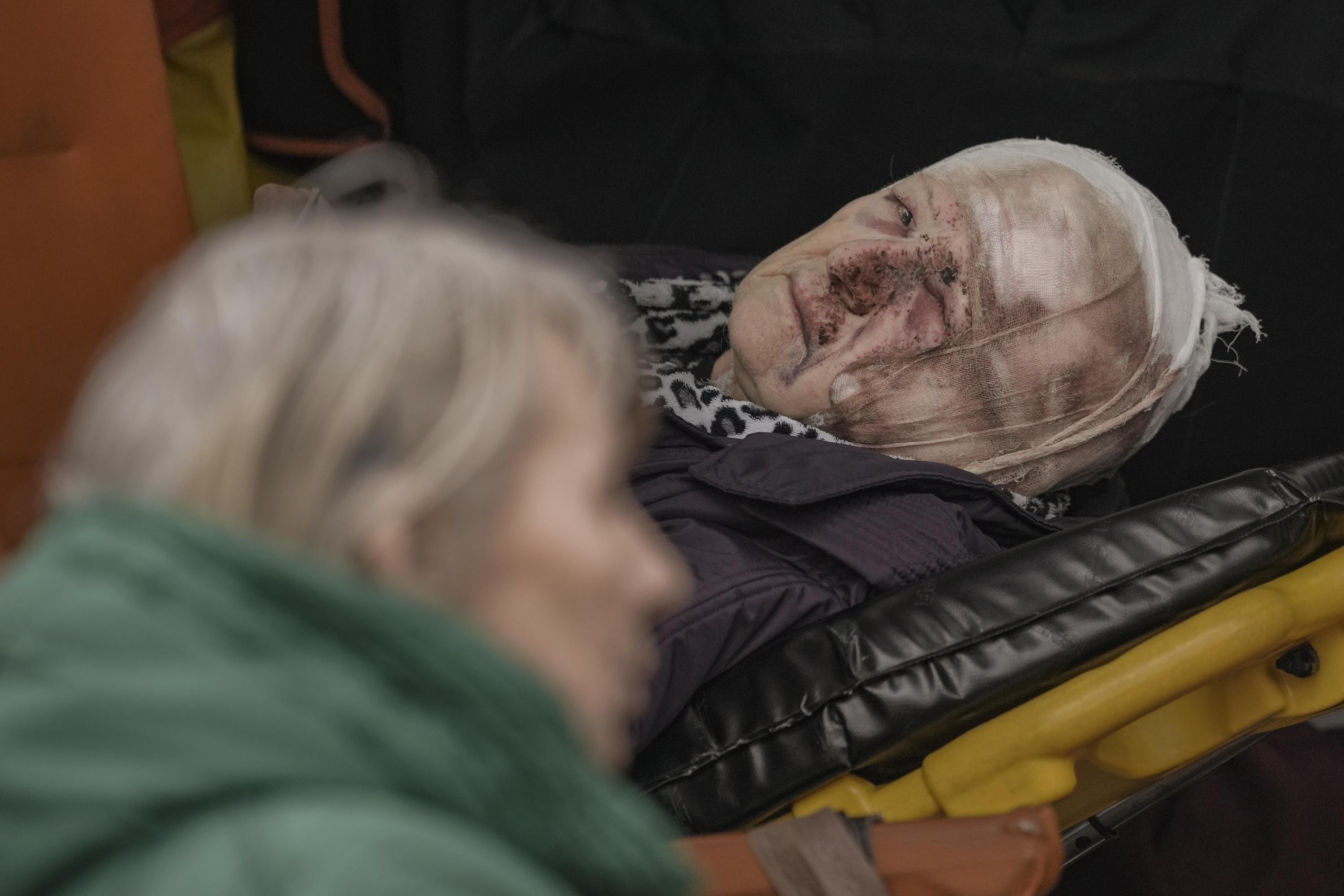 LVIV, Ukraine (AP) – Ukrainian President Volodymyr Zelenskyy angrily warned Moscow that it is sowing a deep hatred for Russia among his people, as constant artillery barrages and aerial bombings are reducing cities to rubble, killing civilians and driving others into shelters, leaving them to scrounge for food and water to survive.

Russia’s invasion of Ukraine has ground into a war of attrition in many places, with the toll on civilians rising as Moscow seeks to pound cities into submission from entrenched positions.

A nuclear research facility in the besieged city of Kharkiv, near the Russian border, again came under fire Saturday, and Ukraine’s nuclear watchdog said that because of ongoing hostilities it was impossible to assess the extent of the damage.

Kharkiv has been besieged by Russian forces since the start of the invasion and has come under repeated shelling that has hit residential buildings and critical infrastructure.

Ukrainian authorities have previously reported that Russian shelling had damaged buildings at the facility, but there had been no release of radiation. The International Atomic Energy Agency has said the nuclear material in the facility is always subcritical and the inventory of radioactive material is very low, reducing the risks of radiation release.

On the western side of the country, Russian rockets struck Lviv on Saturday while President Joe Biden visited neighboring Polandserving as a reminder that Moscow is willing to strike anywhere in Ukraine despite its claim to be focusing its offensive on the country’s east.

Early Sunday, a chemical smell still lingered in the air as firefighters in Lviv sprayed water on a burned section of an oil facility hit in the Russian attack.

A security guard at the site, Yaroslav Prokopiv, said he saw three rockets strike and destroy two oil tanks but no one was hurt.

“The third strike threw me to the ground,” he said.

Russia’s back-to-back airstrikes shook the city that has become a haven for an estimated 200,000 people who have had to flee their hometowns. Lviv had been largely spared since the invasion began, although missiles struck an aircraft repair facility near the main airport a week ago.

In the dim, crowded bomb shelter under an apartment block a short ways from the first blast site, Olana Ukrainets, a 34-year-old IT professional, said she could not believe she had to hide again after fleeing from the northeastern city of Kharkiv, one of the most bombed cities of the war.

“We were on one side of the street and saw it on the other side,” she said. “We saw fire. I said to my friend, ‘What’s this?’ Then we heard the sound of an explosion and glass breaking. We tried to hide between buildings. I do not know what the target was. ”

Two cities on opposite ends of the country are seeing some of the worst suffering at the moment, Chernihiv in the north – strategically located on the road from the Belarusian border to the capital, Kyiv – and Mariupol in the south, a key port city on the Sea of ​​Azov.

Both are encircled by Russian forces, but still holding out.

Chernihiv has been under attack since the early days of the invasion and over the last week, Russia destroyed the main vehicular bridge leading out of the city and rendered a nearby pedestrian bridge impassable, cutting off the last route for civilians to flee, or for food and medicine to be brought in.

Chernihiv’s remaining residents are terrified that each blast, bomb and body that lies uncollected on the streets ensnares them in the same macabre trap of unescapable killings and destruction.

“In basements at night, everyone is talking about one thing: Chernihiv becoming (the) next Mariupol,” said 38-year-old resident Ihar Kazmerchak, a linguistics scholar.

He spoke to The Associated Press by cellphone, amid incessant beeps signaling that his battery was dying. The city is without power, running water and heating. At pharmacies, the list of medicines no longer available grows longer by the day.

Kazmerchak starts his day in long lines for drinking water, rationed to 10 liters (2 1/2 gallons) per person. People come with empty bottles and buckets for filling when water-delivery trucks make their rounds.

“Food is running out, and shelling and bombing does not stop,” he said.

More than half of the city’s 280,000 inhabitants have already fled and hundreds who stayed have been killed, Mayor Vladyslav Atroshenko said.

Refugees from Chernihiv who fled the encirclement and reached Poland this week spoke of broad and terrible destruction, with bombs flattening at least two schools in the city center and strikes also hitting the stadium, museums and many homes.

They said that with utilities knocked out, people are taking water from the Desna to drink and that strikes are killing people while they wait in line for food. Volodymyr Fedorovych, 77, said he narrowly escaped a bomb that fell on a bread line he had been standing in just moments earlier. He said the blast killed 16 people and injured dozens, blowing off arms and legs.

So intense is the siege that some of those trapped cannot even muster the strength to be afraid anymore, Kazmerchak said.

“Ravaged houses, fires, corpses in the street, huge aircraft bombs that did not explode in courtyards are not surprising anyone anymore,” he said. “People are simply tired of being scared and do not even always go down to the basements.”

Britain’s defense ministry said Saturday that it does not expect a reprieve for citizens of Ukraine’s bombed cities anytime soon.

“Russia will continue to use its heavy firepower on urban areas as it looks to limit its own already considerable losses, at the cost of further civilian casualties,” the UK ministry said.

Previous bombings of hospitals and other nonmilitary sites, including a theater in Mariupol where Ukrainian authorities said a Russian airstrike is believed to have killed 300 people last week, already have given rise to war crimes allegations.

The invasion has driven more than 10 million people from their homes, almost a quarter of Ukraine’s population. Of those, more than 3.7 million have fled the country entirely, according to the United Nations. Thousands of civilians are believed to have died.

Andrea Rosa in Kharkiv; Nebi Qena in Kyiv; Cara Anna in Lviv and Associated Press journalists around the world contributed to this report.