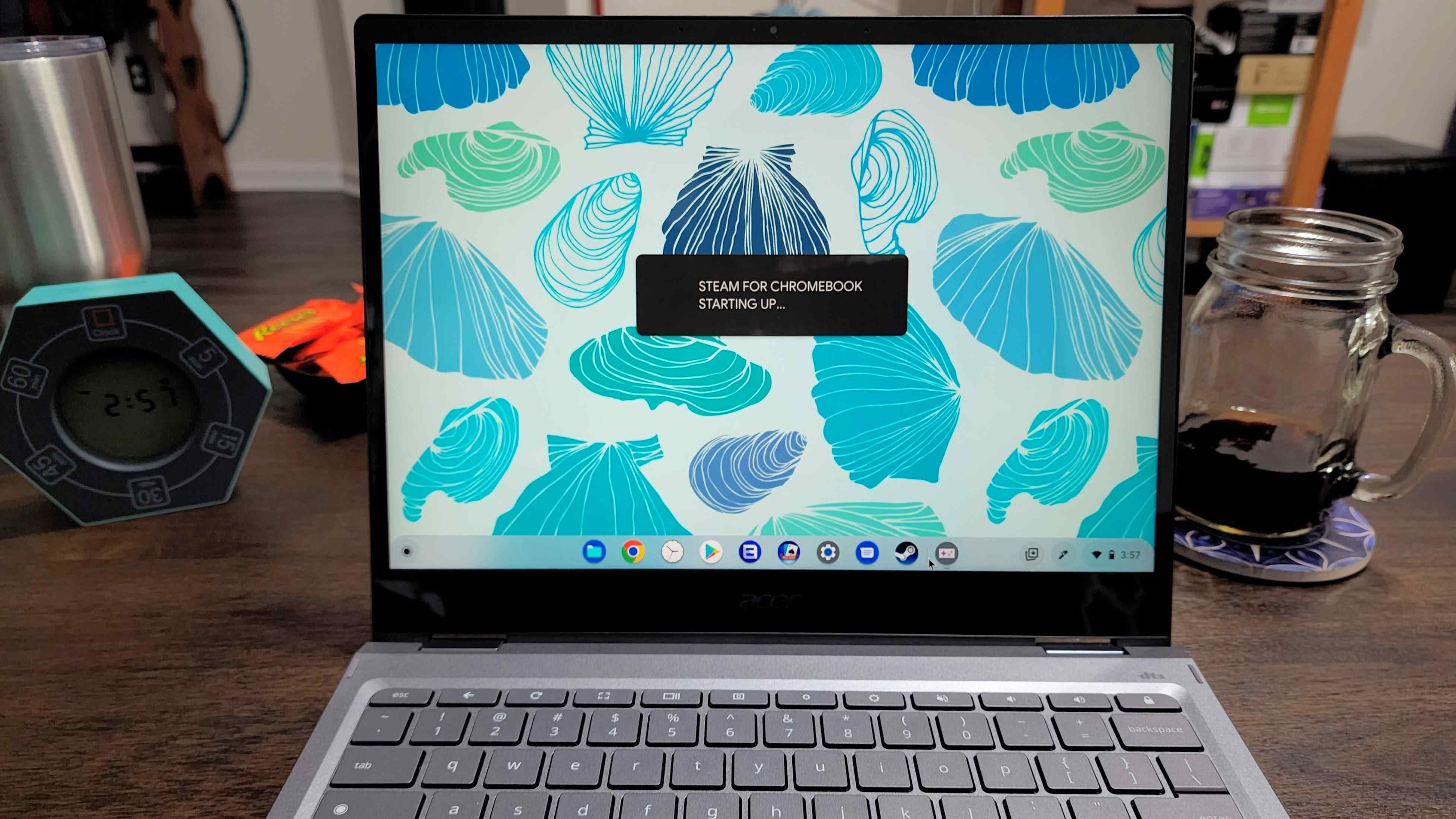 Gaming on Chromebooks up to this point has been a compromise on top of awkwardness on top of half-measures. I say this on someone who has “gamed” on every Chromebook she’s owned for the last four years – the only games I trusted to play properly on Chrome OS were casual games like Microsoft Solitaire Collection. This is why even before Google confirmed it was working with Steam on Chrome OS, it had been a rumor, a prayer that Chrome users had begged and dreamed of for years and years.

Well, wake up and smell the dev channel, my friends. Thanks to the opening of the Steam on Chrome OS Alpha test, you can install and play Steam games on your Chromebook – but only on a handful of premium Chromebooks. Even then, you’ll probably swap back to whatever console or PC you’ve been gaming on so far in less than three hours.

This is indeed an alpha test, and here be dragons, especially for the overall best Chromebooks on the market today.

Switching over to the Dev channel and getting Steam up and running took less than 15 minutes, most of which was downloading and installing the Dev version of Chrome OS. Once you’ve enabled the Borealis flag and put the token into the crosh command line – if you do not know what either of those are you might want to follow our Steam for Chrome OS installation guide – installing Steam itself is literally two clicks.

Even if you’ve never used it, getting started with Steam is a breeze – when you can read the text, that is. One of the first two “known issues” on the Chromium page for Steam on Chrome OS Alpha is “Devices with display resolutions greater than 1080p may encounter performance and scaling issues.”

The 13.5-inch, 400-nit, 2K (2256 x 1504-pixel) touchscreen on the Acer Chromebook Spin 713 has thus far been a point of pride for the series, but until this bug is fixed, Spin 713 owners will have to squint or pull out a magnifying glass in order to see regular text on the Steam store. And before you ask, no, external monitors do not help (“External monitors are not supported and have unexpected behavior”), and no matter how you crank your Display size up, Steam’s text size will not see any appreciable change.

Forget those letter posters, how close you have to lean in to actually read the test is a true vision test.

This teeny size problem has so far only impacted the Steam store. Every game I’ve downloaded and tried loads at a normal size all touch targets are accurate as long as you keep the game in fullscreen mode. If you try to make the window smaller so you can see your cheat codes or see the time, you can develop a gap between where you mouse over an element and what it’s actually clicking, but that’s the kind of bug I expect to be addressed in the coming months.

If you have anything less than perfect vision, prepare yourself for an eye strain the first time you get Steam installed and get all your games downloaded. That said, the bigger hardware-related limiters aren’t the display or the lack of dedicated GPU support; it’s something much more basic.

If we’ve said it once, we’ve said it a thousand times: Chromebooks do not get the RAM respect they deserve. 8GB is the minimum RAM requirement for Steam on Chrome OS Alpha, but it’s straight-up not enough for anything graphic and action-intensive. I loaded The Witcher 3: The Wild Hunt just to see if it’d run, and it did – just not well.

Steam only has the Windows version of The Witcher 3 – and a great many other triple-A titles. These games can only be installed using Steam Play, Steam’s name for the compatibility layers like Proton, and while this allows us to play games that would otherwise be unavailable, it’s yet another running underneath of an already impressively resource-intensive game.

The result: it even lagged on the opening scene a couple of times, and whenever I’d try and reposition the camera, things would stutter horribly while the laptop tried to catch up. That was just with me trying to get out of the damn castle: no combat, barely any NPCs around. In Steam on Chrome OS Alpha’s defense, they do say upfront that you should only play with an i7 on something like the ASUS Chromebook CX9, but even then, you’ll still have to crank graphics and post-processing down to low.

So if you’ve expecting to just load up Halo Infinite and go nuts, let me pop that bubble real quick. Even with an i7 and 16GB of RAM, things aren’t seamless yet – after all, it’s an Alpha test – but the more people who play and report issues, the faster they get fixed.

While I’d love to download every game on the list and give them all a spin, that brings us to the next hurdle: internal storage. Granted, all the Chromebooks starting off the Steam on Chrome OS Alpha have at least 128GB of SSD storage, but when you’re dealing with games that can be over 30GB each – you need a data diet, Witcher – that space dwindles quickly.

No current Chromebook can overcome these; we’ll have to wait for the next generation of Chromebooks to arrive with at least 16GB RAM and at least 256GB storage with 512GB and 1TB options widely available. After one full day and night, Steam on Chrome OS Alpha has eaten half my 256GB hard drive. They’ll also need dGPUs and / or support for external GPUs, which will have to be built into future boards.

While I’d love to say I dove into 12 hours of Arkham or Elder Scrolls to stress test it, I instead went a little more civilized for my stress test: 12 hours straight of Civilization V. While not a very action-packed game, after 200 turns and over a thousand years of civilization-building, there were so many units and cities on the map that the map would start to lag every time I’d move between areas, and then the map would move and re-render terrain and everything else after a couple of seconds.

I went back and took it up another 60 rounds, and it just keeps getting more pronounced. While this is not great news for Civ players looking to control all the luxury goods, it helps demonstrate the limits of how much Steam on Chrome OS Alpha can handle on the hardware configuration most users have: an i5 and 8GB of RAM. Significant lag in open-world games like Witcher 3 was instantly noticeable – but things slightly improve for these games after several minutes.

When Witcher 3 first installs and launches, it spends about ten minutes setting up shader libraries, and that’s not completely done by the time you start playing. Both of our Chrome OS gurus Kent Duke and Luke Short noticed on several games that games needed several minutes to get the shader cache populated, then things would even out (as much as your hardware allows).

Cranking down the graphics and other features can improve consistency, too, making thousands of games almost flawless if you do not have graphical issues of a 2K screen. Lower resolution games like Catan Creators Edition played like a champ, with a rare stutter now and then after spending two hours building up resources, but otherwise perfect.

Well, perfect except for tying you down to a charger. Steam on Chrome OS will eat your Chromebook’s battery alive. My Acer Spin 713 usually averages about 6-8 hours of active use before it cries for a charger. Running Steam games – even relatively resource-light ones like Catan – my time away from a charger was cut in half.

Gaming is energy-intensive – especially when you’re dealing with integrated graphics and not a dedicated GPU – and part of this drain can be attributed to a lack of optimization in the Alpha. Most Chromebook owners are used to going all day without charging and just topping up overnight, though, and you’ll want to stay near a charger. In fullscreen mode, you will not see the indicator draining or a battery alert until that panic-inducing “2% battery, 5 minutes left” critical notification finally pops up.

Good, but not good enough anymore

You also will not charge at top speed while playing: using a 45W charger, recharging from dead to full took twice as long. Even once the battery was full, my USB-C cables LED display showed the laptop still pulling 16-24W rather than the traditional 1-6W. As I sit here typing this while Steam is minimized with no game actually running, I’ve lost half my battery in 90 minutes and the battery indicator says it’ll run dead in less than an hour.

On the bright side, this will likely spur the next generation of premium Chromebooks to upgrade the charging speeds significantly. Only a few Chromebooks currently support 65W charging while most are still at the same 45W they adopted when Power Delivery first came to Chromebooks.

Feedback is crucial, and you should give it each and every time

Whether you just play one game religiously or you try out your entire Steam library, Google wants your feedback. Every time you close or quit a game, you’ll get a notification begging for your thoughts, and you should answer it every time. It’s not time-sensitive; I’ve answered a couple the next morning after gaming till 0330.

The game and your system / email are already pre-loaded, and by rating your gameplay experience every time, the team can see if performance is improving as they continue to tweak things. You can also click multiple options from a dozen issues (and a couple praises), enter other bugs, and write comments about what did not work properly – or if it worked just fine out of the gate.

Steam on Chrome OS Alpha is already off to a fairly decent start, as long as you’re willing to take some lag and crashes in stride. If your compatible Chromebook is your only laptop, I recommend against putting it on the Developer channel as it’s where new features and bug “fixes” often get tested. Dev channel is prone to some major issues like being totally locked out by a bad update or having to re-image your laptop after something gets corrupted, so if you’re reliant on it for school or work, wait until Steam on Chrome OS comes to the Beta channel.

Ara is Commerce Editor for Android Police and a lover of all things theming, customization, and accessorizing. After seven years of writing how-tos, buyer’s guides, and reviews at Android Central, Ara brings a unique flair to her writings (and a lot of Disney references). When she’s not writing, she’s running around Walt Disney World with her trusty shoulder holster and a Key Lime Dole Whip. If you see her without headphones, run.