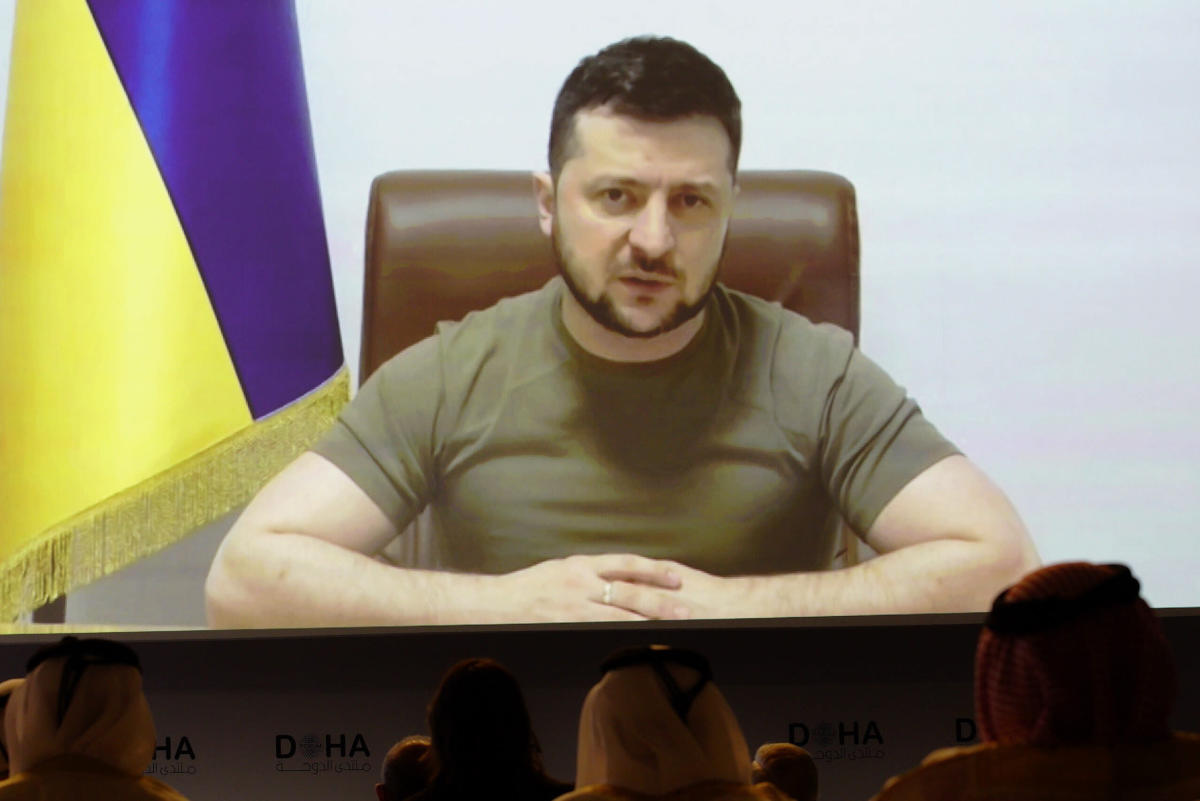 DOHA, Qatar (AP) – Ukraine’s president made a surprise video appearance Saturday at Qatar’s Doha Forum, calling on the energy-rich nation and others to boost their production to counteract the loss of Russian energy supplies.

Volodymyr Zelenskyy called on the United Nations and world powers to come to his aid, as he has in a series of other addresses given around the world since the start of the war Feb. 24. He compared Russia’s destruction of the port city of Mariupol to the Syrian and Russian destruction wrought on the city of Aleppo in the Syrian war.

The loss of Ukrainian wheat already has worried Mideast nations like Egypt, which rely on those exports.

Zelenskyy called on countries to increase their exports of energy – something particularly important as Qatar is a world leader in the export of natural gas. Western sanctions have deeply cut into Russian exports, which are crucial for European nations.

Also on hand was Saudi Foreign Minister Prince Faisal bin Farhan, the top diplomat for the world’s biggest oil exporter. Saudi Arabia so far has said it would stick with an OPEC + production schedule the cartel struck with Russia and other producers. The kingdom also said it would not be responsible for higher prices as it deals with attacks from Yemen’s Houthi rebels amid its yearslong war in the Arab world’s poorest country.

Zelenskyy criticized Russia for what he described as threatening the world with its nuclear weapons, raising the possibility of tactical nuclear weapons being used on the battlefield.

“Russia is deliberately bragging they can destroy with nuclear weapons, not only a certain country but the entire planet,” Zelenskyy said.

He also noted that Muslims in Ukraine would have to fight during the upcoming holy fasting month of Ramadan.

“We have to ensure this sacred month of Ramadan is not overshadowed by the misery of people in Ukraine,” he said.

Qatar’s ruling emir meanwhile criticized Israel for its treatment of Palestinians over the last 70 years, urging the world to stand against a growing global militarization that found its peak in Russia’s ongoing war on Ukraine.

Sheikh Tamim bin Hamad Al Thani sought to draw a line between anti-Semitism and the ability to criticize Israel for occupying lands that Palestinians hope to have a state of their own. Sheikh Tamim’s comments come as Bahrain and the United Arab Emirates in 2020 regularized diplomatic relations with Israel.

“It is noteworthy here that the accusation of anti-Semitism is now used wrongly against anyone who criticizes Israel’s policies, and this impinges on the struggle against racism and actual anti-Semitism,” Sheikh Tamim said at the start of the forum.

“While stressing solidarity, I would like in this context to remind of the millions of Palestinians who have been suffering from the Israeli occupation and international neglect for more than seven decades,” he added. “Similarly, there are a lot of other people, such as the Syrian people and the Afghan people, for whom the international community has failed to render justice. ”

The Israeli Foreign Ministry did not immediately respond to a request for comment. It was Saturday, the Jewish day of rest, when government offices are closed.

However, Israel and Qatar have discussed reducing tensions in the Hamas-controlled Gaza Strip. Qatar, which supports Islamist groups across the region, has stepped in to provide humanitarian aid, including cash-filled suitcases shipped to Gaza with Israel’s permission.

Qatar’s support of Islamists saw it become the target of a yearlong boycott by four Arab nations – Bahrain, Egypt, Saudi Arabia and the UAE – during President Donald Trump’s time in office. That boycott ended just before President Joe Biden took office in 2021.

US Sen. Lindsey Graham, a Republican from South Carolina on hand for the forum, praised the event for having the top diplomats of Saudi Arabia and Qatar sharing a stage as a sign that “the embargo is over.”

However, he noted what he described as a Saudi and Emirati reluctance to condemn Russia over its war on Ukraine. He said he hoped the Russian people would rise up against Vladimir Putin and have “a change in the regime” as “they have a very dead future” with the way things stood now.

“What you’ve seen on your televisions, like all of us, is war crimes on an industrial scale,” Graham said. “The question for the world is: Can that be forgiven? Can we be the world we want to be and let Putin get away with this? The answer for me is no. ” 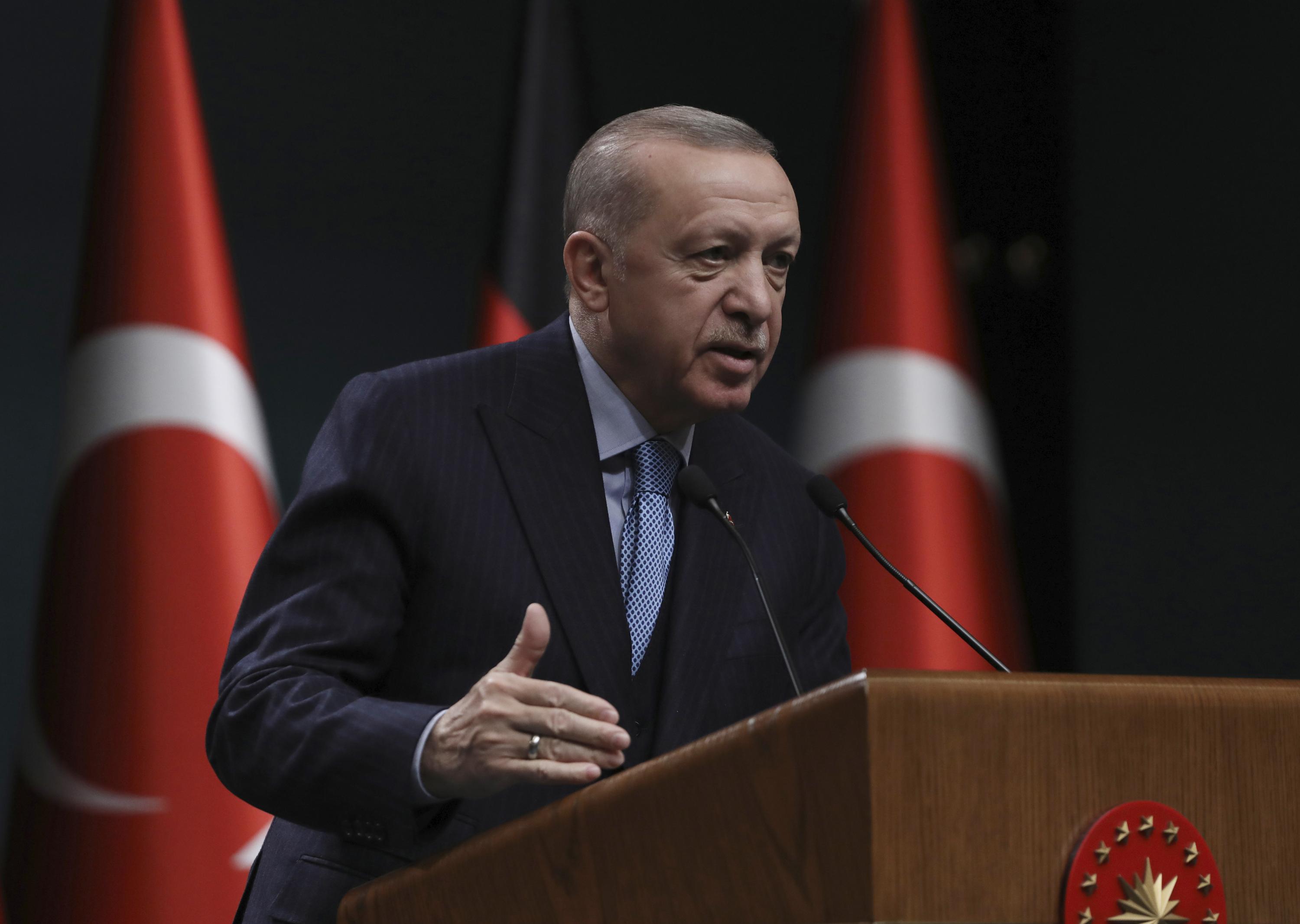 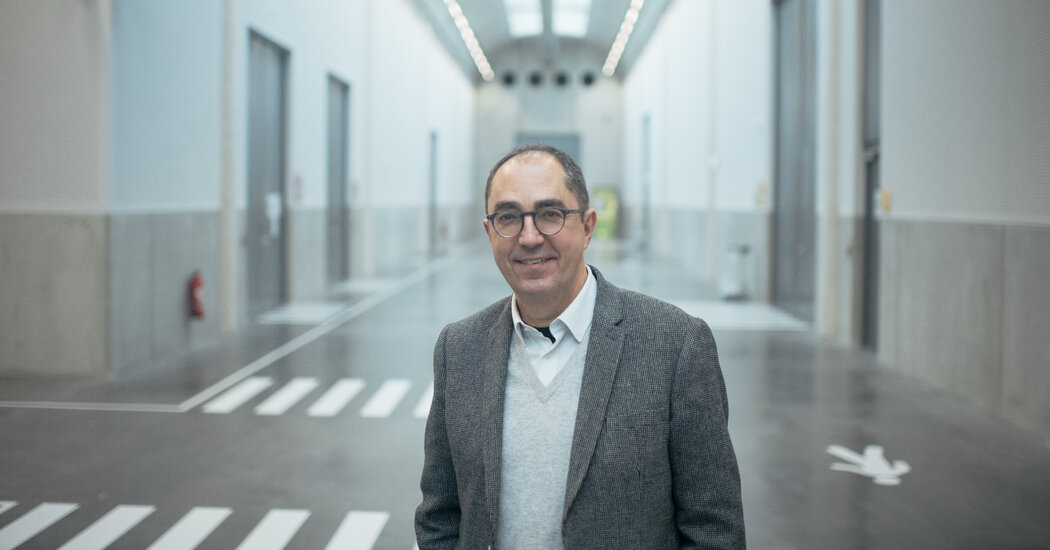