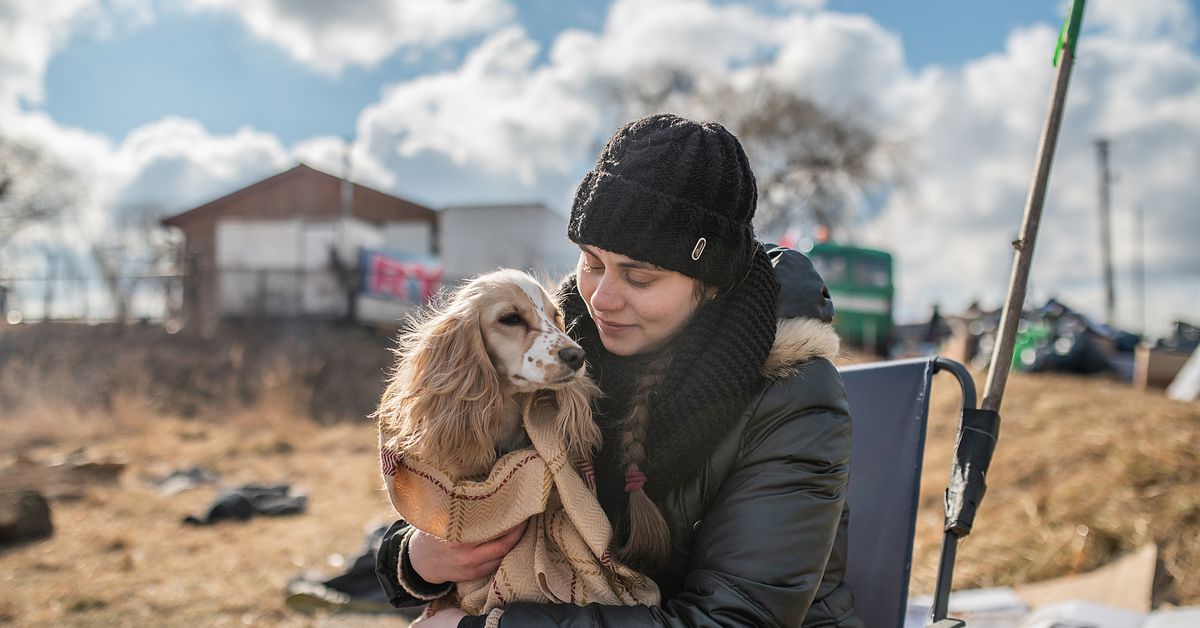 Since Russia began its invasion of Ukraine one month ago, at least 977 Ukrainian civilians have been killed and at least 3.6 million have fled to other countries, though the true numbers could be far higher. But the war has also upended life for Ukraine’s animals.

By one estimate, Ukraine was home to some 750,000 dogs and 5.5 million cats as of 2014. In the desperate rush to flee war, many of those animals were left behind by their owners, especially larger dogs.

“We can not judge because we do not know how people feel when there is a real risk that you can be killed,” Olga Chevganiuk of UAnimals, a Ukrainian animal welfare organization, told me. (She is currently working in Indonesia, where she was staying when the war broke out.)

Animal welfare groups like UAnimals, as well as activists around Ukraine who have stayed amid the chaos of war, are working around the clock to rescue stray animals and keep shelters running. That devotion can come with a cost: An animal shelter in Kharkiv was bombed, and three animal rescue volunteers were killed in fighting earlier this month while attempting to deliver dog food.

Chevganiuk says UAnimals is focused on providing feed and other supplies to animal shelters and street animals, as well as evacuating animals to safety in neighboring Poland.

“The most horrible part is when you’re not able to reach a place and you know animals are suffering there,” she said. “It’s not possible to reach all the areas, or it’s pretty difficult because of the danger, so you have to find real brave people who will agree to go near these areas in danger.” The organization is also operating a support hotline, fielding questions around animal rescue and connecting fellow Ukrainians to resources for animal care.

Zoos are also under threat. The Feldman Ecopark zoo in Kharkiv was damaged amid fighting and there are reports that animals at Park XII Months zoo, north of Kyiv, have begun to die from starvation and cold. Animals in zoos already suffer psychological stress from captivity; the disruption and chaos of war only exacerbates it.

Farmed animals are victims of war too. According to the Netherlands-based trade publication Poultry World, Avangard – the largest egg producer in Ukraine – says several of its farms have been shut down and destroyed due to Russian aggression. One farm had to suspend production due to loss of power, and most of its flock had to be slaughtered due to lack of feed.

The situation for animals in Ukraine is disturbing, though sadly unsurprising. For most of human history, animals were not just indirectly harmed by war but were drafted into war efforts, whether as transport or to carry a knight or later a cavalry fighter onto the battlefield – where they were often targets themselves.

Technological advances in warfare have largely rendered animal labor unnecessary. But with animals now woven into our economy and our daily lives – whether as beloved pets in the home, entertainment in circuses and zoos, or as food in industrial farms – they have become victims of war alongside the humans that keep them for companionship or profit .

The valiant efforts by Ukrainians who’ve stayed behind in a war zone to save animals is perhaps the best demonstration of humanity’s deep connection to other species, but it has also underscored the dearth of animal welfare protections, whether humans are at war or not. As the legal status of animals slowly improves, however, their legal status in armed conflict might too – that is, if animal welfare and environmental advocates can include them in international humanitarian law and national disaster planning.

A brief history of animals’ role in war

Before war became highly mechanized and technological, animals were enlisted to shoulder much of the burden of war alongside human soldiers. Larger mammals like horses, donkeys, oxen, and elephants were used to transport soldiers and supplies, fighters charged into battle on horseback, and carrier pigeons reliably delivered messages when telegraph and telephone lines were cut off.

Pigeons were so critical to Britain’s efforts in World War I that shooting them was criminalized under the Defense of the Realm Act in 1914 since any pigeon may have been carrying a critical message. Horses were still used by some armies during that war in the midst of machine guns and chemical weapons, as the play and 2011 film War Horse demonstrated. “Mercy dogs” were used to comfort dying British soldiers and donkeys were used to console soldiers suffering from PTSD.

Animals are still employed in war today, though in much smaller numbers. Dogs are trained to sniff out bombs and rats are trained to detect landmines, while dolphins and sea lions are trained to protect harbors from sea mines. Pigs, monkeys, mice, and guinea pigs, among other species, have been used in grisly weapons testing, such as biological and chemical agents and explosives tests.

As is the case with human beings, animals in wartime are now mostly harmed indirectly, as we’ve seen in Ukraine: Pets are abandoned by fleeing owners, zoos are put under siege, livestock are left to starve or are seemingly targeted to damage a country’s food supply, and wild animals are inadvertently killed from shelling.

A paper published in Nature found that from 1946 to 2010, “conflict frequency predicts the occurrence and severity of population declines among wild large herbivores in African protected areas” and that conflict frequency was the most important predictor of wildlife population trends among the variables researchers studied. This is caused, in part, by the poaching and wildlife trafficking that can increase during conflict.

In the midst of war, animal protection is often ignored by everyone involved, from policymakers to generals to civilians. But some organizations and conflict scholars have ideas, and even some plans in motion, to incorporate animal welfare into war and other emergency situations.

How to protect animals in war

According to research by Jerome de Hemptinne, an expert on international humanitarian law (IHL), animals are largely excluded from wartime treaties like the Geneva and Hague conventions. There are some exceptions, such as multilateral pacts that protect endangered species, but even as the legal status of animals has evolved in recent decades, incorporating animal protections into IHL remains challenging.

Beyond protecting civilians themselves, IHL in general protects “civilian objects,” such as schools, homes, and places of worship, but it’s unclear whether a civilian object must be an inanimate object to merit protection, Hemptinne writes. If so, it would by definition exclude animals. But IHL conventions would not place animals in the protected category of “civilian,” either. As they do so often in peacetime, animals in wartime exist in a legal gray zone.

But in his 2017 paper “The Protection of Animals During Warfare,” Hemptinne details some paths forward for animal protection in warfare.

Second, Article 53 of the Geneva Convention IV prohibits the occupying power from destroying private and public property unless it is absolutely necessary for military operations. “This provision could provide minimum protection to certain animals when considered to be items of private or public property,” Hemptinne added.

There are also broader efforts underway to protect animals in emergency situations, like wars, as well as natural disasters. “Animals need to be included in the consideration when we talk about humanitarian aid,” Jackson Zee, director of global affairs and disaster resilience for the animal welfare organization Four Paws, told me.

To that end, Four Paws collaborated with European Union member states to include animal welfare in the EU Civil Protection Mechanism, a framework created to improve disaster preparedness and response in the region. The animal welfare language is largely symbolic, but Zee said it’s a first step. His organization is now using it to lobby EU member states to include animals in their national disaster planning and set aside resources to operationalize animal protection in disaster response.

Four Paws has taken a similar approach with the United Nations. In 2018, the organization helped to secure animal welfare language at an EU / UN summit on disaster risk reduction. “It was mostly in spirit because there was no monetary tag to it,” Zee says. “We will be pushing that forward so that it’s adopted on a national basis across every country [in the EU]. Currently, Italy is the only country that’s adopted that fully. ”

These policy efforts are only at the beginning of a long, uncertain slog, and even if animal protections were adopted into the laws of war, enforcing those rules in conflict would be as difficult, if not more so, than enforcing the laws meant to protect the tens of thousands of humans who die in war each year. For now, Zee and many of his colleagues are focused on Ukraine, as Four Paws has staff on the ground aiding in rescue efforts and watching over animals at the organization’s bear sanctuary in Domazhyr.

Zee also has his eye on the future. “The effort will last a long time,” he told me. “This is only the beginning… so the efforts that we do now need to continue to be facilitated months from now, and eventually, hopefully for the recovery.”

The Russian invasion of Ukraine has exposed, as have so many past wars, the critical roles animals play in human life. When we’re separated from our pets, we’ll go to great lengths to find them because the companionship they provide can be just as meaningful, and sometimes more so, than that provided by fellow humans. When conflict kills wildlife, it also harms ecosystems that humans rely on. When farms are destroyed, so too are sources of food and people’s livelihoods.

Animal welfare and human prosperity are often pitted against one another, as though well-being were a zero-sum game. But human health and animal health, in wartime and peacetime, are inextricably linked.

A version of this story was initially published in the Future Perfect newsletter. Sign up here to subscribe!