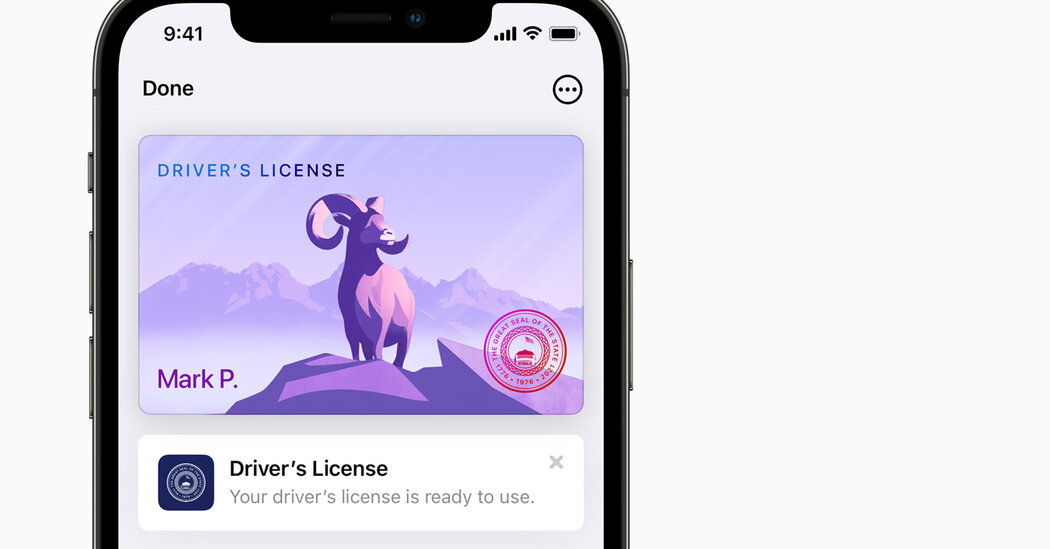 It started as a digital catchall for credit cards and concert tickets, enabling anyone with an iPhone to be waved through checkout lines and turnstiles.

The technology then expanded to vaccine passport records during the pandemic. And this week, the Apple Wallet, an app for iPhones and Apple Watches that stores payment information and QR codes, added driver’s licenses for the first time.

On Wednesday, Arizona became the first state to offer digital copies of driver’s licenses and state identification cards as part of a sweeping partnership with Apple that was announced last year.

The project is expected to expand to Colorado, Connecticut, Georgia, Hawaii, Iowa, Kentucky, Maryland, Mississippi, Ohio, Oklahoma and Utah, as well as the territory of Puerto Rico. The initiative has been promoted by the tech giant and the states for its convenience.

However, the expansion is drawing renewed scrutiny to privacy issues and Apple’s outsize sphere of influence. Few places will accept the digital driver’s licenses at the start of the program, and Apple did not say when the other states and Puerto Rico would join Arizona.

Arizona residents should hold off on discarding their old-school driver’s licenses and government identification cards, though. The digital ones will not be valid should they get pulled over by the police or carded at a bar.

For now, the digital licenses will only be accepted at select security screening checkpoints at Phoenix Sky Harbor International Airport that are operated by the Transportation Security Administration, a federal agency, officials said.

As of Thursday, the state’s Motor Vehicles Division, which is part of the Arizona Department of Transportation, estimated that 11,500 people had requested digital copies of their driver’s licenses or state ID cards.

“If they like technology and they want to be an early adopter for it, by all means,” Bill Lamoreaux, a spokesman for the Motor Vehicles Division in Arizona, said on Thursday. “This is absolutely voluntary.”

In announcing the debut of this feature, Apple said that residents in participating states could press the plus sign in their Apple Wallets to add their license or state-issued ID card to their iPhone or Apple Watch.

The process requires participants to photograph the front and back of their license using their phone’s camera, and to complete a series of facial and head movements, according to Apple. Users must also provide a selfie, which is sent to their state using encryption along with the photos of their license so that local authorities can verify their identity.

It was not immediately clear how much it would cost the states to vet the requests associated with the digital licenses, which Apple and state officials said would not create an additional expense for people using them.

At the airport security checkpoints, people with an iPhone or an Apple Watch can hold the device up to an electronic reader, which will then prompt them to use facial recognition, a thumbprint or a passcode on their phone to consent to transmitting their encrypted information to a TSA agent, Apple said.

The company emphasized that personal information is not stored on Apple’s servers, and that people will never have to hand over their phones to the security agents.

But not everyone is so bullish on the expanding technology.

“Apple is now sort of trying to vertically integrate your whole life into its phone,” Elizabeth M. Renieris, a professor of technology ethics at the University of Notre Dame, said on Friday.

Professor Renieris said that while Apple is known for its robust encryption technology, the company is poised to amass even more information about the habits and everyday activities of its customers.

“They’re normalizing the presentation of identification and other credentials,” she said. “This is also coming on the back of the conversation around digital vaccine passports.”

Residents of some states can request a digital copy of their coronavirus vaccination card that can be added to their Apple Wallet, which displays a QR code that is unique to that person. One of those states is Connecticut, which plans to participate in Apple’s digital license program.

Tony Guerrera, the deputy commissioner of the Connecticut Department of Motor Vehicles, said on Friday that the state was still assessing the technological aspects of the initiative, including privacy concerns. The state does not have a timetable for when digital licenses will be available, he said.

“We just want to make sure that all our i’s are dotted and all our t’s are crossed,” Mr. Guerrera said. “That is why we’re not rushing into this.”

Still, he said, he can see the appeal of being able to store a copy of a license on an iPhone or Apple Watch.

“Listen, in today’s techno world, I would think there are many, many individuals that would love to have something like it,” he said. “Apple is a world-renowned corporation, and they’ve done their research, and they know that people want this.”