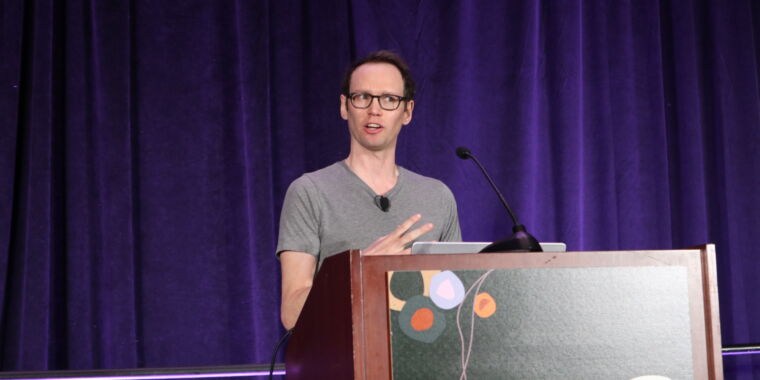 SAN FRANCISCO — Josh Wardle, creator of the game Wordlearguably holds a world record for the fastest sale of a massive new game the instant it became a worldwide phenomenon.

Hence, his presentation at the 2022 Game Developers Conference has a different flair than the usual “post-mortem” dissection of a finished game. His presentation has plenty to dissect, including the “low seven figures” deal that saw him sell the whole thing to The New York Times at the end of January. But in addition to questions about how Wordle was born, Wardle seems aware of the unspoken question on everyone’s mind: Why would you move on just as the game took off?

Answering both of those questions, to some extent, requires appreciating that the Times had been in Wardle’s mind well before Wordle joined its family.

“The New York Times, in the end, was actually a really good buyer for the game,” Wardle says while standing at a GDC podium in modest dress: gray shirt, blue jeans, slightly receding hair pushed back with thick glasses covering his expressive face. “I think they’ll be great stewards. Their games play an important part in the origin of Wordle. They treat their players with respect. I do not think they’re going to cover the game in ads or anything. “

Exactly how the Times handles Wordle from here on out, however, is not Wardle’s concern — a fact he emphasizes hugely in this talk, when he expresses his relief to finally be free of the “stress” that Wordle added to his life. Before he parted ways with Wordlethere was the matter of building it in the first place.

“I think crosswords are one of the best co-op gaming experiences,” Wardle tells the crowd, and in his case, this means the daily, meditative play he and his partner shared at the beginning of 2021, pens primed over the New York Times’ crosswords in particular. “There’s something about looking at a clue and someone else looking at the same clue but arriving at a different solution that’s kind of beautiful. It teaches you something about the other person.”

Wardle warns the crowd that he’ll be getting “a bit MFA, arts degree” as he points to a quote from literary theorist Terry Eagleton: “Language is the very air I breathe.” Wardle then pleads with the conference’s crowd of game devs to think about making more games with words as opposed to fearing backlash for making stuff that resembles the likes of Words With Friends: “If you make words a core mechanic of your game, everyone comes to your game having a deep understanding of its fundamentals. You do not have to teach them about words.”

After explaining exactly how Wordle works (players get six guesses to figure out a five-letter word), Wardle cops to a comparison that many avid gamers (including commenters at Ars’ first-ever Wordle article) have made about his eventual hit game: the 1980s board game Mastermind.

When building Wordle‘s first prototype in 2013, Wardle thought back to the “guess the color” system of the aforementioned board game. “What if you were guessing words instead of colored sequences?” he asks the crowd. The final game’s five-letter concept stuck at that long-ago point, but Wardle realized something was not right when he dumped a massive list of every possible five-letter word into the app’s random-word pool:

“It turns out that these are all valid five-letter words,” Wardle says while displaying the above image, drawing a laugh from the crowd. After testing the worst outliers in his game, he had a revelation: When players encounter a word they’ve never heard of or used in common speech, they are left with little rational means of guessing what the next letter might be, even as grays , greens, and yellows accumulate. Early players could not ascertain how those letters might connect to each other (ie, trying common consonant-and-vowel combinations). The result was identical to Mastermind, where the color draw is wholly random. Wardle did not want that.

“What’s fun about WordleI think, is what you can tease out, based on what you know about language, “Wardle says.” What the word should be. “