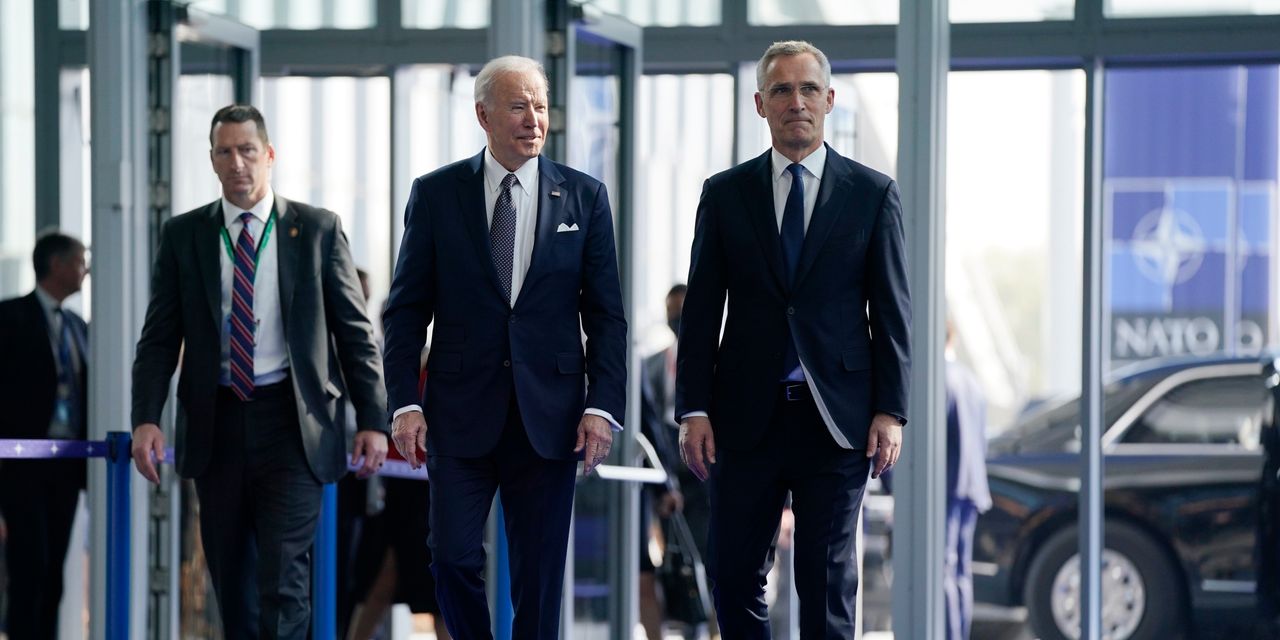 BRUSSELS — President Biden met with NATO leaders Thursday to agree on new measures to help Ukraine battle Russia’s invasion and address growing concerns Moscow might use chemical, biological or other unconventional weapons in its monthlong war.

The North Atlantic Treaty Organization’s emergency summit is the first in a day-long string of gatherings Mr. Biden has planned with European allies and other world leaders, as they map out their next steps helping Ukraine defend against the attack launched last month by Russian President Vladimir Putin.

With Russian forces facing unexpectedly strong and lethal opposition from Ukrainian forces, Western leaders say they are increasingly worried Mr. Putin may resort to using weapons of mass destruction. NATO officials are grappling with the question of what actions by Russia would count as red lines that could prompt more direct involvement by the alliance.

The potential for chemical warfare in the conflict was “a real threat,” Mr. Biden said Wednesday as he left Washington.

“Any use of chemical weapons would fundamentally change the nature of the conflict,” NATO Secretary-General Jens Stoltenberg said as he arrived to kick off the summit. He warned of widespread and serious consequences of such action, but declined to say it was a red line.

NATO has been walking a tightrope of providing Ukraine with weapons and other support, without being directly drawn into the fighting. Mr. Stoltenberg said direct NATO involvement, such as establishing a no-fly zone over Ukraine, could carry high risks for the war to broaden.

Ukrainian President Volodymyr Zelensky addressed the NATO gathering, continuing weeks of outreach with politicians abroad to rally support for his country. Mr. Zelensky repeated his requests for more security assistance for Ukraine, but he did not revive his appeal for NATO membership or for a no-fly zone, according to senior Biden administration officials.

In his remarks at the NATO gathering, Mr. Biden stressed the need to strengthen NATO’s eastern flank and said he welcomed pledges of increased defense spending from various countries, officials said.

Russia’s potential use of chemical weapons was raised in the discussion among NATO leaders, officials said, adding that there was recognition that the alliance needed to continue to prepare for and respond to different contingencies.

Accidental release of chemical agents is also worrying some members. “We are concerned when Russian aggression forces are shelling chemical plants and similar facilities,” Slovenia’s Prime Minister Janez Janša said ahead of the NATO summit. “This could trigger a disaster on a large scale.”

Allies also brought up the need to call on China to not support Russia in its war against Ukraine, officials said.

Mr. Stoltenberg on Wednesday said aid to Ukraine could cover a variety of areas.

“I expect allies will agree to provide additional support, including cybersecurity assistance, as well as equipment to help Ukraine protect against chemical, biological and radiological and nuclear threats.” Stoltenberg said.

Mr. Biden, who arrived in Brussels Wednesday, will also be meeting with leaders of the European Union and the Group of Seven leading industrial countries. Japanese Prime Minister Fumio Kishida and Canadian Prime Minister Justin Trudeau have flown to Brussels for the meetings.

The US and EU have imposed the biggest coordinated package of sanctions ever levied against a major economy in the aftermath of Russia’s invasion of Ukraine.

US national security adviser Jake Sullivan said Mr. Biden and G-7 leaders would discuss the economic spillover effects of the conflict and announce an agreement on coordinating sanctions enforcement. The US also plans to impose a new round of sanctions on political figures and oligarchs, he said, without providing more details.

According to US officials and documents viewed by The Wall Street Journal, Mr. Biden is preparing to unveil sanctions on more than 300 members of the Russian State Duma, the lower house of parliament, as soon as Thursday.

During his meeting with the European Council, which groups EU national leaders, Mr. Biden will discuss the humanitarian crisis resulting from the war in Ukraine, the next steps on sanctions and their approach to China, especially as it relates to Russia’s invasion, Mr. Sullivan said.

What do you hope to see come out of today’s NATO summit? Join the conversation below.

Mr. Biden will consult with leaders throughout the day on the possibility of cyberattacks by Russia against the US or its allies and the potential use of chemical or biological weapons in Ukraine, he said.

The US is expected to make an announcement on Friday on enhancing European energy security and reducing the continent’s dependence on Russian natural gas, Mr. Sullivan said.

Ahead of Thursday’s meeting, NATO released estimates indicating Russia may have lost as much as a fifth of its combat forces in about a month of fighting in Ukraine. US military analysts have estimated lower casualty figures.

Up to 40,000 Russian troops have been killed, wounded, taken prisoner or are missing in Ukraine, a senior NATO military official said. Russia may also have lost 10% of its equipment, impairing Moscow’s ability to maintain its pace of operations, another NATO official said. Moscow has not released updated casualty figures since acknowledging on March 2 the deaths of 498 troops in Ukraine.

Write to Tarini Parti at Tarini.Parti@wsj.com and Robert Wall at robert.wall@wsj.com