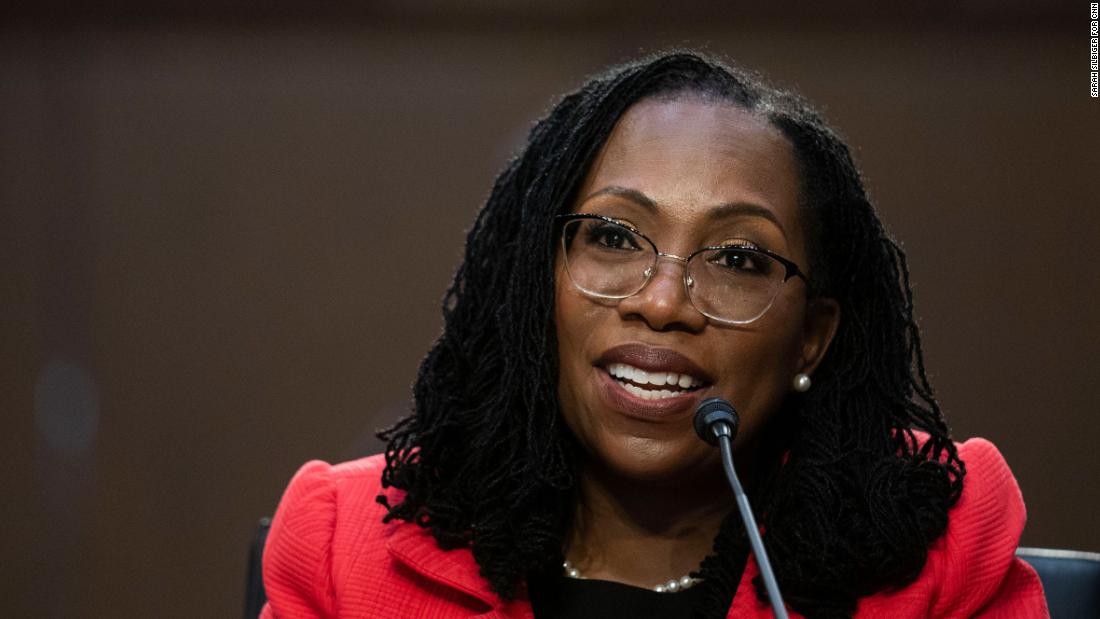 Democrats gave Jackson plenty of opportunity to push back on the GOP attacks, while letting her discuss the background that will make her a unique addition to the Supreme Court.

Facing GOP skepticism for not aligning herself with a specific judicial philosophy, Jackson gave new details about the way she approaches her job and the “methodology” she uses for deciding a case.

“I am acutely aware that as a judge in our system I have limited power and I am trying in every case to stay in my lane,” she said.

The three-step process she described involved clearing her mind of any preconceived notions about the case, receiving the various inputs – the written briefs, the factual record, the hearings – she’ll need to decide a case, and embarking on an interpretation of the law that hews to “the constraints” on her role as a judge.

She said she was trying to “figure out what the words mean as they were intended by the people who wrote them.”

This description of her methodology was not enough to satisfy Republican questions about her judicial philosophy, which refers to the type of framework a judge uses to analyze a case of constitutional interpretation. An originalist approach, which is favored by conservatives, seeks to interpret the Constitution by how the framers would have understood the words at the time they were drafted. Some progressives have sought to chart what has been called a “Living Constitution” approach, which seeks to interpret the general principles in the Constitution in a way that is applicable to contemporary circumstances.

Even as she answered Nebraska Republican Sen. Ben Sasse’s questions about the dueling approaches, Jackson declined to explicitly align herself with one or the other, noting that constitutional interpretation did not come up every often in the cases she was deciding as a lower court judge.

“These are some of the most difficult cases that a judge has to deal with,” Jackson said when she was first given the chance by Judiciary Chairman Dick Durbin to respond to the claims, which were spearheaded last week by Missouri GOP Sen. Josh Hawley.

Later on in the hearing, she said she still has nightmares about the witness in one of the cases Republicans are now scrutinizing, adding, “These crimes are, are horrible. And so I take them very seriously, just as I did all of the crimes, but especially crimes against children. ”

Republicans have zeroed in on what they say is Jackson’s tendency to issue sentences in these cases that came below the sentencing guidelines – a pattern that puts her in the mainstream of judges. Less than a third of the sentences issued in non-production child pornography cases fell within the guidelines in 2019.

When she was being grilled by Texas Republican Sen. Ted Cruz, Jackson noted that the guidelines are just a starting point for judges.

“Congress is the body that tells sentencing judges what they’re supposed to look at and Congress has said that a judge is not playing a numbers game,” Jackson said.

“The judge is looking at all of these different factors and making a determination in each case, based on a number of different considerations,” she added. “And in every case, I did my duty to hold the defendants accountable in light of the evidence and the information that was presented to me.”

The sharpest line of questioning on this topic was from Hawley, who focused on one particular case where Jackson sentenced the offender to three months in a case where prosecutors sought 24 months and the guidelines instructed 97-121 months.

Jackson said that in the cases she did what judges did, and took “into account all the various aspects of a particular case and make a determination consistent with my authority, my judgment, and understanding fully the egregious nature of the crime.”

GOP leans into culture war issues ahead of midterms

Broad culture war topics that Republicans are hitting Democrats on ahead of the midterms made their way into GOP questions for Jackson.

Cruz asked Jackson several questions about “critical race theory” – a concept that she said “does not come up in my work.”

Cruz tried to connect it to Jackson through a presentation she had made as vice chair of the U.S. Sentencing Commission, in which Jackson said she listed it among a “laundry list of different academic disciplines that I said relate to sentencing policy.” He also raised it in the context of children’s books taught at Georgetown Day School, where Jackson is on board. Jackson said that board does not control the school’s curriculum.

Late. John Cornyn, a fellow Texas Republican, spent a significant portion of his question period asking Jackson about the Supreme Court’s 2015 same-sex marriage ruling, and whether the opinion was grounded on a legal principle that “allows the court to substitute its opinion for the elected representatives of the people. ”

Cornyn suggested the case could be seen as: “We five members of the Supreme Court are going to decide what the law of the land should be, and anybody who disagrees with us will be labeled a bigot, or be accused of discrimination, even if those, their beliefs happen to flow from sincerely held religious conviction, like the definition of a, of a marriage between a man and a woman. ”

And a line of questioning from Arkansas GOP Sen. Tom Cotton leaned heavily on Jackson’s beliefs about addressing crime, asking her questions about whether the United States needed more police officers, whether enough murderers were being put in prison and the sentences for drug crimes.

Republican Sen. John Kennedy of Louisiana, as part of a larger line of inquiry about how courts enshrine rights not explicitly in the Constitution, asked whether a judge could find that there is a constitutional right of a “transgender woman to compete in women’s sports.”

Late. Marsha Blackburn, a Tennessee Republican, also brought up the issue of transgender athletes, after asking Jackson to define the word woman. “The fact that you can not give me a straight answer about something as fundamental as what a woman is underscores the dangers of the kind of progressive education that we are hearing about.”

Abstract questions try to hint how she would approach controversial cases

Like Sasse’s interest in her judicial philosophy, other GOP senators probed Jackson’s approach to abstract legal ideas that sound academic but that could be pivotal in how she’d decide controversial cases.

Utah Sen. Mike Lee likewise focused some of his questioning on the Ninth Amendment. Its language contemplates unenumerated rights, and he asked Jackson how judges should go about weighing what rights could flow from it.

The concept of stare decisis also came up repeatedly, including in questions from Democratic Sen. Amy Klobuchar of Minnesota, who noted it in the context of abortion rights decisions. Stare decisis dictates the Supreme Court consider several factors before deciding to overrule precedent to limit dramatic swings in the law that undermines its stability.

“I think it plays a very important role as a doctrine that keeps shifts from happening in court,” Jackson said. “It’s very important to have stability in the law for the rule of law purposes so that people can order themselves and predict their lives given what the Supreme Court has already said.”

In recent Supreme Court decisions overturning precedent, the liberal minority has accused the conservative majority of ignoring some of the principles of stare decisis to overturn precedents that conservatives do not like.

Jackson reflects on the values ​​she learned from her family

After several opening statements Monday emphasized the unique background that Jackson – as the first Black woman nominated to be a justice – would bring to the Supreme Court, Tuesday gave the judge the opportunity to discuss that background in detail.

Part of the context of her parents’ decision to move from Miami to Washington before she was born was the civil rights legislation that passed in the 1960s.

“My parents moved to Washington, DC, because this is where it all started, for them, in terms of having new freedoms,” Jackson said, as she discussed the values ​​of “hard work” and “perseverance” she had learned from them .

She said that her grandparents, who did not have “a lot of formal education,” were the “hardest working people I’ve ever known and who just got up every day, put one foot after the other and provided for their families and made sure that their children went to college, even though they never had those opportunities. “

She said she was reflecting on her grandparents in this historic moment.

“I stand on the shoulders of people from that generation,” she said.

This story has been updated with further developments Tuesday.