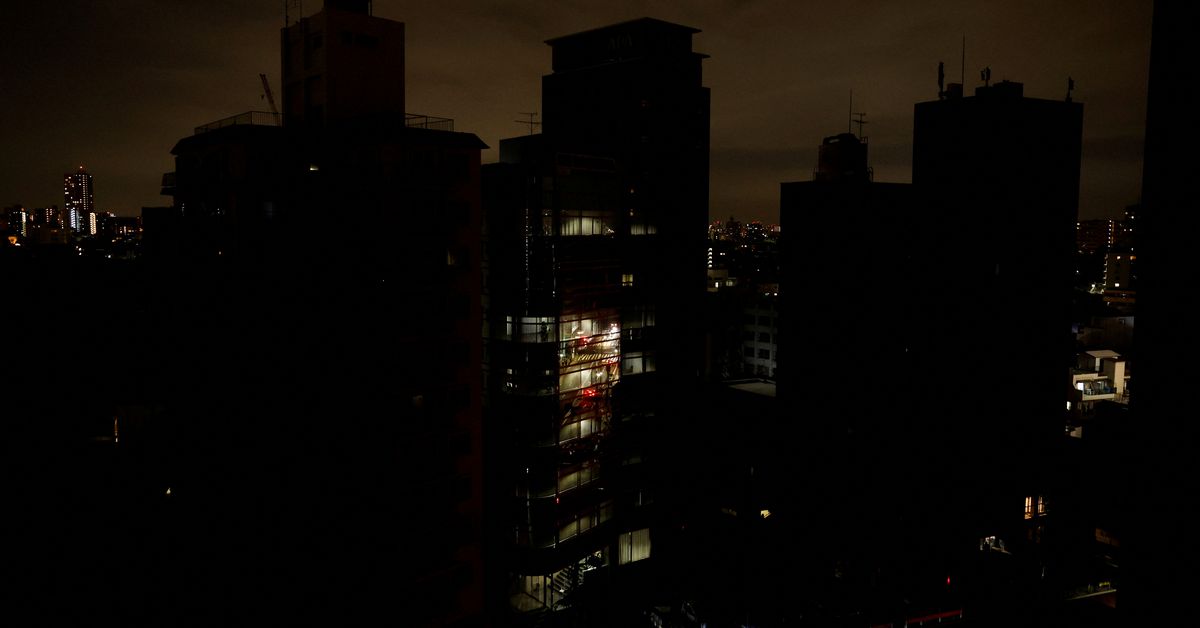 Houses and buildings are seen in an electric stoppage at the area after an earthquake at Toshima ward in Tokyo, Japan March 17, 2022. REUTERS / Issei Kato / File Photo

Japan’s Ministry of Economy, Trade and Industry issued the warning for areas supplied by Tokyo Electric (Tepco) and Tohoku Electric Power Co in anticipation of a demand spike to meet heating needs as temperatures dropped. The government also called on citizens to reduce their energy consumption.

“We request your cooperation to save electricity as much as possible, such as by setting your thermostats at around 20 degrees Celsius and switching off any unnecessary lights,” Chief Cabinet Secretary Hirokazu Matsuno told a news conference.

Matsuno added that the request for power savings was unlikely to extend beyond Tuesday given the expected rise in temperatures and the addition of more solar power generation as the weather improves.

A magnitude 7.4 earthquake that struck northeast Japan last Wednesday destroyed equipment and forced six thermal power plants in regions serviced by Tepco (9501.T) and Tohoku Electric (9506.T) to shut down. Industry Minister Koichi Hagiuda earlier told parliament that some of those plants could take weeks or months to return to operation.

In Tokyo, snow fell on Tuesday with temperatures forecast to peak at just 4 degrees Celsius (39.2 degrees Fahrenheit), compared to a high of 14 degrees on Monday.

Coinciding with the supply warning, Tepco said on Tuesday that technical troubles caused a power outage for about 2,120 households in three prefectures near Tokyo as of 11:34 am (0234 GMT).

Hiroshi Okamoto, a senior executive for TEPCO Power Grid, told reporters at a government news conference those outages were unrelated to the power shortage.

Tepco said it had no plans to conduct any planned outages but warned that blackouts could occur in the evening. The company has requested seven regional utilities to provide electricity supply of up to 1.42 million kilowatts.