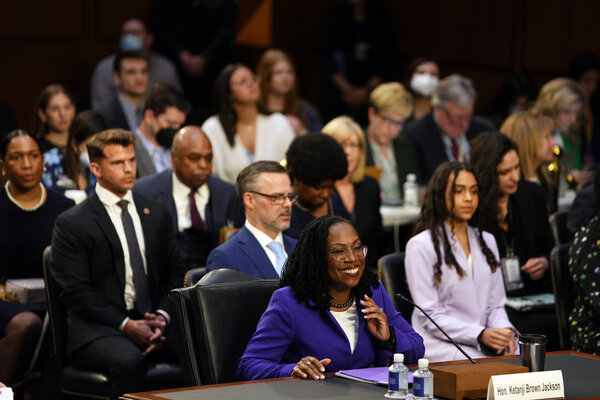 Judge Ketanji Brown Jackson’s Supreme Court nomination process opened on Monday morning with a recognition of how extraordinary of a moment it was and a bipartisan promise not to turn the proceedings into the sort of toxic spectacle that has characterized the modern Senate confirmation hearing.

Senator Charles E. Grassley of Iowa, the senior Republican on the Judiciary Committee, pulled out a chair for Judge Jackson, the first Black woman in American history to be considered for a spot on the bench. Senator Richard Durbin of Illinois, the committee’s chairman, said, “You’re a living witness to the fact that in America all is possible.”

“Not a single justice has been a Black woman. You can be the first, ”Mr. Durbin said. “It’s not easy being the first. In some ways you have to be the best, in some ways the bravest. ”

But even as Democrats championed Judge Jackson’s record, emphasizing her experience in the courtroom and her breadth of experience compared to current Supreme Court justices, the first moments of gentility gave way to Republicans on the committee who bitterly recalled personal attacks they and previous nominees had weathered , and suggested, without evidence, that she was more closely linked to progressive groups than she had previously indicated.

“There are a number of dark money groups on the left that argue federal judges should make policy decisions based on judges’ own values,” Mr. Grassley said in his opening statement. “I’ve talked about the troubling role of far-left dark money groups, like Demand Justice, having played in this administration’s judicial selection process.”

Judge Jackson has been confirmed by the Senate three times before.

Several Republicans also said that they would be closely examining her work as a public defender. In recent weeks, Republicans have targeted Judge Jackson’s past work as a public defender, trying to establish her time defending criminals as evidence that she and other judicial appointees chosen by the Biden administration have inappropriately gone beyond giving a competent defense to clients accused of serious, sometimes vicious crimes.

According to two people familiar with the process White House officials took to prepare Judge Jackson, she was anticipating lines of criticism that involved her work as a public defender. She has been sharply questioned by Republicans for her work representing detainees at the US military prison at Guantánamo Bay.

“As someone who has deep respect for the adversarial system of justice, I understand the importance of zealot advocacy,” Sen. John Cornyn, Republican of Texas, told Judge Jackson in his opening statement. “But it appears sometimes this advocacy has gone beyond the pale and in some instances it appears your advocacy has bled over into your decision-making process as a judge.”

Judge Jackson smiled through the opening statements after she took her seat under the klieg lights. Behind her sat a mix of people who prepared her for her latest appearance, including Dana Remus, the White House counsel, who recently has led almost-daily mock hearing sessions with Judge Jackson.

Throughout his opening statement, Mr. Durbin repeatedly emphasized that her appointment by President Biden was historic and meaningful. “You’re a living witness to the fact that in America all is possible,” he said. Her judicial record, he added, displayed a command of the facts and relevant legal materials and should be enough to secure a bipartisan vote.

“There may be some who claim, without a shred of evidence,” Mr. Durbin said, “that you will be some kind of rubber stamp for the president.” Mr. Durbin said that her record had been scoured, and any criticism would ignore her qualifications. “I have four words: Look at the record. Your complete record has been scoured by this committee on four different occasions. ”

Mr. Grassley was one of several Republicans who said on Monday that they were intent on not turning the hearing process into a “circus” they associate with the politically toxic Senate confirmation hearings of Justice Brett M. Kavanaugh in 2018. During that time, Judge Kavanaugh had been accused by Christine Blasey Ford, a research psychologist, of sexual assault decades ago, when they were both high school students in the Washington suburbs. On Monday, several Republicans, including Senator Ted Cruz of Texas, attempted to lump those accusations into theatrical personal attacks: “No one is going to inquire into your teenage dating habits,” Mr. Cruz said.

“We will not turn this into a spectacle based on alleged process fouls,” Mr. Grassley told her, a reference to what he said were multiple interruptions during his introductory statement during Judge Kavanaugh’s hearing. “What we will do, however, is ask tough questions about Judge Jackson’s judicial philosophy.”

Mr. Grassley said Republicans were sure to have questions about her work on the U.S. Court of Appeals for the District of Columbia Circuit, a high-profile bench she joined last year and a frequent staging ground for Supreme Court justices. In Judge Jackson’s eight months on the appeals court, she issued just two majority opinions.

Senator Lindsey Graham, a Republican of South Carolina, bitterly recalled the Kavanaugh hearings and said that Republicans would not be launching personal attacks against her.

“There will not be this constant attack on you like Judge Kavanaugh and other conservative judicial appointments,” Mr. Graham, who had supported the nomination of another candidate, J. Michelle Childs, said. “You are the beneficiary of Republican nominees having their lives turned upside down, and it did not work.”