Sullivan’s meeting – which a senior administration official described as “intense” and “candid” – came amid reports that President Biden is considering a trip to Europe in the coming weeks to rally and reassure allies, a visit that would follow Vice President Harris’s trip to Poland and Romania last week. And congressional leaders announced that Ukrainian President Volodymyr Zelensky would deliver a virtual address to Congress on Wednesday, an event likely to carry deep emotional resonance.

Biden officials declined to disclose any specific warnings Sullivan may have conveyed to the Chinese about offering assistance to Russia, but the senior administration official said that the United States has “deep concerns about China’s alignment with Russia at this time” and that Sullivan was “direct ”With the Chinese about“ the potential implications and consequences of certain actions. ” The official spoke on condition of anonymity to discuss sensitive matters during a phone call with reporters.

White House press secretary Jen Psaki said Monday that the consequences for China would be “significant,” and speaking on several Sunday shows the day prior, Sullivan offered a similar refrain, telling CNN’s “State of the Union” that “we have communicated to Beijing that we will not stand by and allow any country to compensate Russia for its losses from the economic sanctions.”

On the phone call with reporters, the senior administration official refused to say whether the administration believes that China has already provided military or financial assistance to Russia.

In a statement issued after the meeting, Chinese officials said Yang had made it clear that Beijing is not pleased with the Russia-Ukraine conflict.

“Yang Jiechi pointed out that the situation today in Ukraine has reached a stage that the Chinese side does not want to see,” the statement said. “China has always advocated respecting the sovereignty and territorial integrity of all countries and abiding by the purposes and principles of the UN Charter.”

Still, the statement did not condemn Russia, which unilaterally launched the invasion, saying that “the reasonable concerns of all parties should be responded to.”

Earlier, Zhao Lijian, a spokesperson for the Chinese government, denied the reports that Russia has asked China for military and economic assistance, calling them “false information” that is “neither responsible nor ethical” and adding, “Recently, the US has been spreading false information against China on the Ukraine issue, with sinister intentions. ”

At Monday’s session, Sullivan and Yang also discussed North Korea, as well as the importance of keeping lines of communication between their two nations open, officials said.

Asked about Biden’s possible European trip – first reported by NBC News – Psaki said the administration has made no final decision but signaled that any such visit would involve shoring up NATO and other Western countries.

“We are, of course, closely engaged with our NATO partners and European allies… about the next steps in diplomacy – whether that’s providing additional humanitarian or security assistance or the mechanics for future talks,” Psaki said.

Monday’s discussions – an outgrowth of Biden’s Nov. 15 virtual meeting with Chinese President Xi Jinping – took place at Rome’s Waldorf Astoria, a hotel isolated from the city and favored by politicians and officials visiting from Washington. Journalists were not permitted to enter.

In the months before Russia’s invasion, Beijing and Moscow were drawing closer, forming a nascent alliance as Biden sought to bring together the world’s democracies in a coalition against authoritarianism. But the invasion’s messiness and lethality have put China in a sensitive position, given its emphasis on stability and continuity.

Michele Geraci, a former Italian undersecretary of state who lives part time in Shanghai, said he saw little incentive for China to support Russia in a direct way. “For China, this war is a pain,” Geraci said. “China needs to have a stable world for them to continue to develop their own economy. For them, this is a disruptive event. ”

Geraci added that the Chinese officials he knows were hoping Beijing could play a mediating role between Russian President Vladimir Putin and Ukraine’s Zelensky. “In order to sit between Putin and Zelensky, you need to be neutral,” he said.

The Sullivan-Yang meeting came as the Pentagon concluded that Russia had attacked the International Peacekeeping and Security Center, a Ukrainian military facility about 12 miles from the border with Poland, with cruise missiles launched from long-range bombers Sunday. Poland is a NATO country, and US troops had been deployed at the Ukrainian facility as recently as last month before the Pentagon withdrew them as it became evident that Russia was about to invade.

At least 35 people were killed and 134 more were injured in the attack, Ukrainian officials said. Pentagon spokesman John Kirby said Monday that several structures at the training center were hit. A senior US defense official, speaking on condition of anonymity under ground rules set by the Pentagon, said that “more than a couple dozen” missiles were involved and that the bombers were in Russian airspace when they launched.

Kirby said the Pentagon is not looking at the missile salvo as an effort to “go after” US weapons shipments to Ukraine, which are entering under a cloak of secrecy from neighboring European countries. “I would just tell you that we have multiple routes to get security assistance into the hands of the Ukrainians,” Kirby said. “This was not one of them.”

The senior defense official, speaking at a separate briefing at the Pentagon, said Russian advances on major cities remain stalled on numerous fronts, forcing the Russians to attack from a distance with artillery, rockets and other long-range weapons. Those cities include the capital, Kyiv; the northeastern city of Kharkiv; and the port city of Mariupol in the south.

“Clearly, they are increasing the amount of long-range fires they are applying to these cities, these population centers that are holding out,” the official said.

And in Ukraine, the carnage and chaos continued to pile up.

Shells that appeared to be Russian struck a nine-story residential building in Kyiv’s Obolon district at about 6 am, prompting frightened civilians to flee the building and firefighters to rush to the scene. At least one person was killed, according to Red Cross volunteers at the scene.

In Mariupol, which has been isolated and besieged by Russian forces for days, more than 160 cars carrying civilians were able to leave the city. They departed along a previously established humanitarian corridor and were heading north to the city of Zaporizhzhia, on the Dnieper River, the Mariupol City Council said in a statement. The council’s message, posted Monday afternoon, said a cease-fire was being observed along the humanitarian corridor.

Russian and Ukrainian officials announced Monday that they had agreed on 11 evacuation routes out of Mariupol, with corridors opening at 10 am each day. It was not clear if they were working effectively, or if Russia – which has dropped explosives on previously established humanitarian corridors – was honoring the agreement.

Among the dead in Mariupol was a pregnant woman depicted in an Associated Press photograph after a maternity hospital there was hit with a bomb last week. The AP reported Monday that she and her unborn child had died in the aftermath, as the mother suffered from a crushed pelvis and detached hip.

A convoy of trucks packed with food and medicine bound for Mariupol was again turned away by fierce fighting Monday, in the latest setback to providing help to trapped residents.

The convoy, which also could offer residents a chance to get out, remains stalled about 50 miles southeast of Mariupol, near Berdyansk, the Mariupol City Council said in its statement. The vehicles were originally expected to arrive Sunday afternoon, but Russian forces continued to thwart them and violate a cease-fire agreement, the city official said.

As the violence continued, House Speaker Nancy Pelosi (D-Calif.) And Senate Majority Leader Charles E. Schumer (DN.Y.) announced in a letter to their colleagues that Zelensky would deliver a virtual address to members of Congress on Wednesday morning . Zelensky has addressed other national legislatures, generally to raucous applause.

“The Congress remains unwavering in our commitment to supporting Ukraine as they face Putin’s cruel and diabolical aggression, and to pass legislation to cripple and isolate the Russian economy as well as deliver humanitarian, security and economic assistance to Ukraine,” Pelosi and Schumer said in the letter. 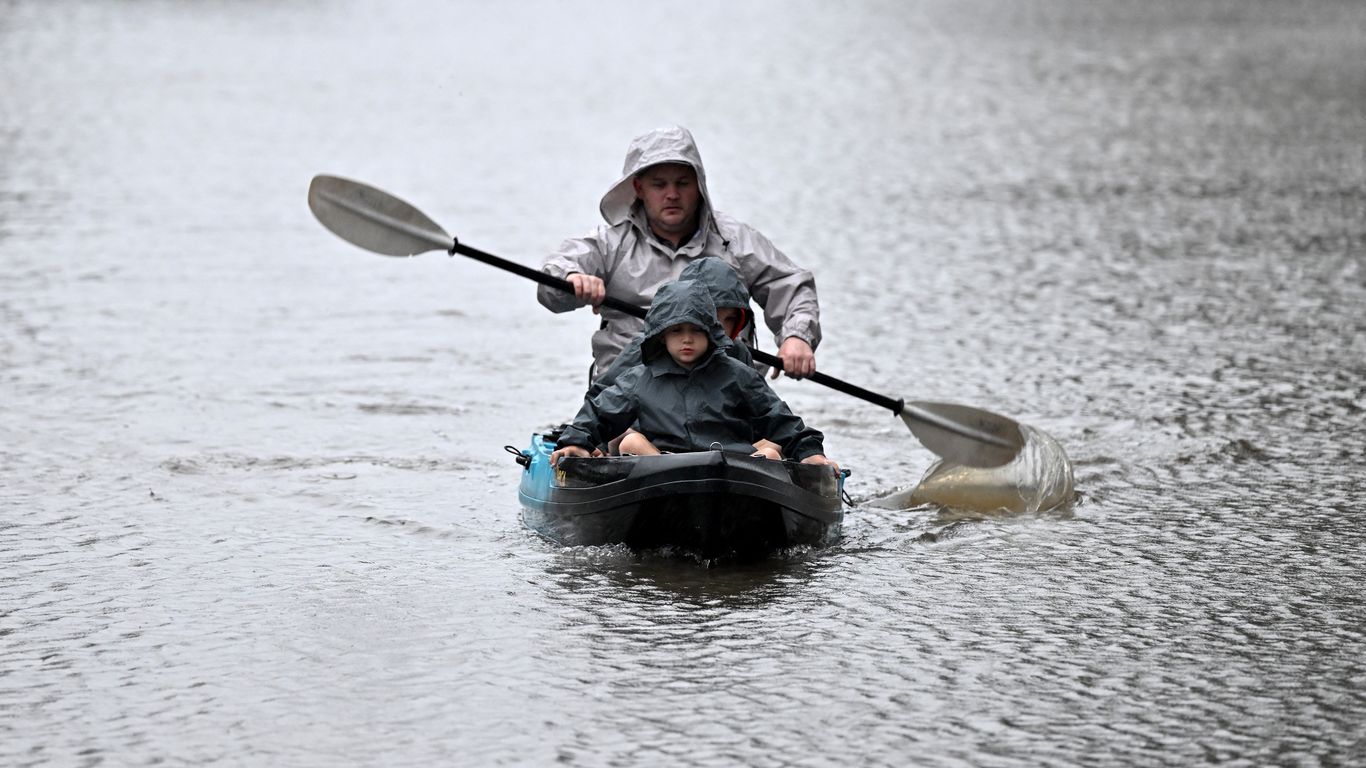