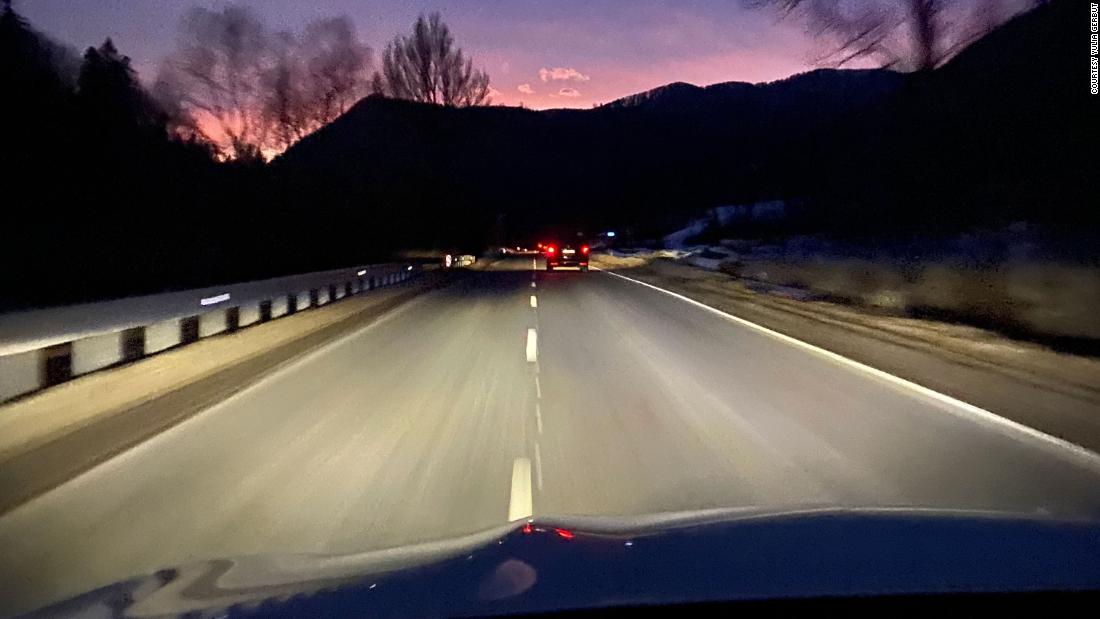 “I can not take him with me,” Gerbut said in a broken voice. “The grave of my son is left there.”

As Kyiv filled her rearview mirror, Gerbut feared the next Russian bomb could fall on her son’s resting place. She had witnessed explosions from her bedroom window and a Russian helicopter shooting flares as she stood in her kitchen. In her heart, she knew the attacks were not stopping.

“I love my country, love my house. I love my life in Ukraine,” Gerbut said. “I did not want to leave.”

The Gerbuts are one of hundreds of thousands of families who make up the more than 2.8 million refugees fleeing the attacks by Russian forces on Ukraine and grappling with their new reality: one filled with grief, pain, anger, and uncertainty.

Chilled by the heat of war

Gerbut gripped her steering wheel and headed toward Zhytomir, a city west of Kyiv, and most importantly in the driver’s mind, a place away from Russia. Despite the mixture of emotions filling her body, Gerbut said she had to suppress them all to become the rock her scared sons needed.

“If I’m coping OK, they are fine,” Gerbut said. “I was very concentrated and very focused on the goal.”

In the back seat, Nikita’s mind was racing. He and his brother Max had just hours earlier heard bombs explode. Their mother had woken them up in a panic and rushed them to the one room in the house with no windows. For the first three hours on the road, Nikita says he was on hyper-alert.

“I was listening to every sound and begging not to hear those explosions,” Nikita said.

His older brother Max, in the front passenger seat, shot video through the windshield, showing cars all around them, most likely carrying families who, just like them, had been chilled by the heat of war.

Max’s videos captured some of the risks his mother was taking to save their lives, including their drive through heavy counterflow traffic.

‘You can feel that it’s something bad’

Traffic jams at checkpoints manned by Ukrainian military soldiers made the Gerbuts’ escape to safety a slow and arduous process, with the sounds of war always just a beat behind them.

On February 25, they reached Lviv, a city near the Polish border. Their few hours of rest at a hotel, which was guarded by Ukrainian soldiers, was abruptly interrupted by the sounds of air raid sirens.

The Gerbuts once again rushed for cover, this time in an area of ​​the hotel with no windows.

“The sound of the siren is very scary,” Gerbut said. “It’s like, you can feel that it’s something bad.”

Their attempt to flee Ukraine and enter Poland was thwarted by a bottleneck at the border. Thousands of families were already waiting in line.

The Gerbuts hopped back in the car, this time to head to the Slovakian border.

In the back seat, next to Nikita, their backpacks were filled with snacks, water and a few prized possessions they could not do without.

The boys had a few books, including a copy of Harry Potter written in Ukrainian.

Yulia Gerbut, whose heavy heart mourned the distance between safety and her son Martin’s grave, had a candle, which memorializes Martin’s life.

“In my brain, it’s like having part of Martin with us,” Gerbut said. “I have my three kids with me. I know it’s just a candle, but still I can look at his picture.”

On February 28, the Gerbuts said they crossed into Slovakia and entered a refugee camp.

“I was shocked,” Gerbut recounted.

Their surroundings, Gerbut remembered, were reminiscent of scenes from movies about World War II. The camp was filled with women, children and babies whose cries Gerbut cannot forget.

After a short stay, the Gerbuts flew to Orlando, where they are now, and where they spoke with CNN.

They are staying with Meegan Youkus, Yulia Gerbut’s host mom from when she was part of an exchange program 20 years ago.

“She has really been like a daughter,” Youkus said.

Nikita and Max started attending public school in Orlando. Their mother has been volunteering to help Ukrainian relief efforts, as she strives to stay close to her home country and the people there who are still in harms way.

Though her own family has temporarily found a measure of safety, she remains acutely aware of her uncertain future.