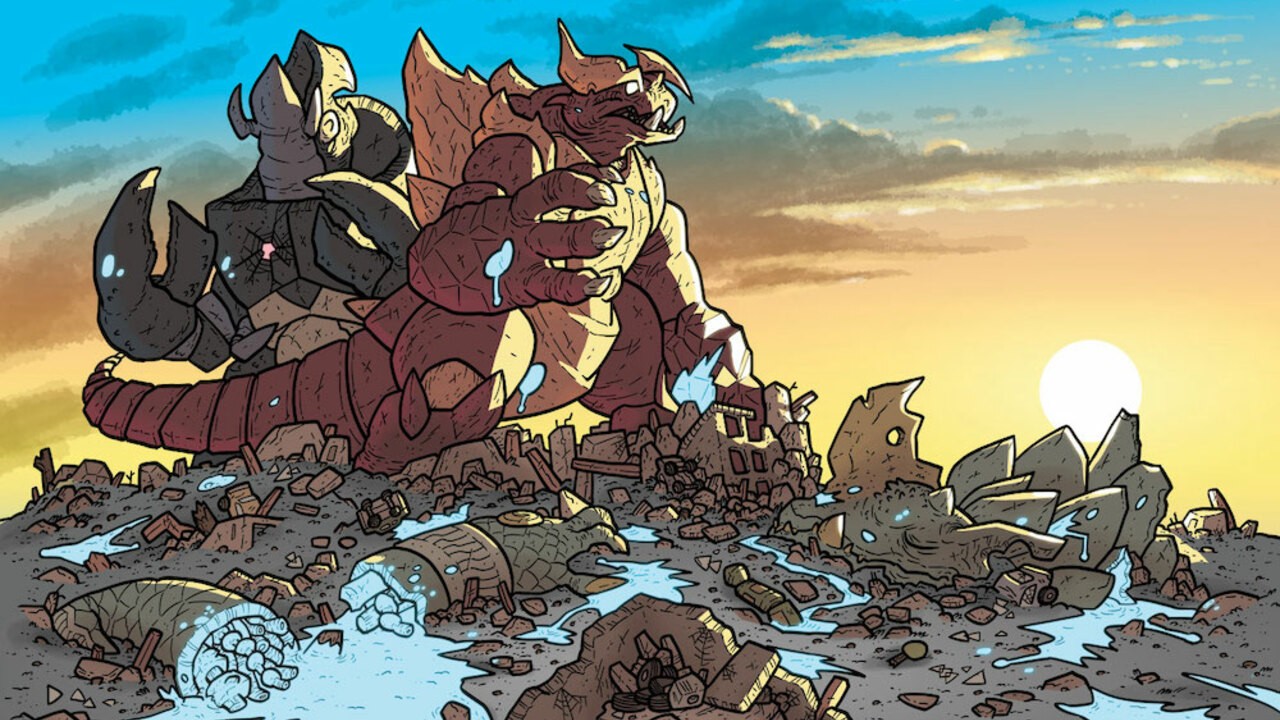 Do you hate kaiju? Yeah! So do we. Godzilla needs to be taken down a peg or two, if you ask us, which you did not. Well, now you can live the kaiju-fighting punch-a-thon of your dreams in Dawn of the Monsters, the latest game from Runbow developers 13AM and publisher WayForward, who themselves made Contra 4 and River City Girls.

Dawn of the Monsters is a couch co-op kaiju beat-’em-up in which you play as a kaiju in order to fight other big monsters, and in which you destroy a bunch of cities along the way because that’s what kaiju do, baby.

We spoke to 13AM CEO and the creative director of the game, Alex Rushdy, about the playable, customizable kaiju, the technical challenges of the game, and what to expect from DOTM ahead of its launch on the 15th March, 2022 …

Nintendo Life: Many of our readers probably know you best for Runbow and Double Cross, but Dawn of the Monsters is quite a departure. Can you take us back to the very start of development and talk about how the project came to be?

Alex Rushdy (Creative Director): Well, way back in the far-off time of 2016 we developed a prototype for a kaiju fighting game and shopped it around to a few publishers. We had some fantastic meetings but ultimately no one was willing to pick up a fighting game as it’s such a competitive market. We shelved the idea, worked on Double Cross, and released that in 2019.

There are plenty of kaiju fighting games, but no one thought to make a kaiju beat-’em-up!

Once that was done, we needed a new project so we pulled the kaiju fighting game concept off the shelf and talked about it, ultimately deciding it would be more exciting to make it a cooperative game.

There are plenty of kaiju fighting games, but no one thought to make a kaiju beat-’em-up! That seemed like a “chocolate and peanut butter” combination and we knew it was a great idea so we started developing that. Evidently, publishers agreed!

Can you talk a little more about your passion for Kaiju Monsters and their history, and why that’s been so important in development?

When I was about 4 or 5 years old, I walked into a Zellers (a now-defunct Canadian department store) and saw a dinosaur I did not recognize in the toy aisle. When I asked my babysitter about it, she explained to me, “That’s not a dinosaur, that’s Godzilla. He’s big, he’s strong, he breathes radioactive breath, and he lives on monster island with these other monsters like Rodan. ” And for a dinosaur-obsessed kid, that basically turned my world upside down. She bought me my first Godzilla (which I still keep on my work desk) and the rest is history. I became obsessed with anything and everything kaiju; Godzilla, Gamera, Ultraman, all of it.

As a kid I watched Godzilla and Ultraman for the bright colors and cool creatures, as an adult I still enjoy it for the stories about nuclear war, environmentalism, fear of the unknown

I think the reason that kaiju are so important to this project is the same reason why I still love kaiju to this day. On the one hand, watching giant monsters battle and destroy cities is highly entertaining, even for children. On the other hand, these films discuss pretty heady and intense concepts core to the human experience. Kaiju allow us to easily talk about problems on a societal level – problems that all of mankind has to deal with.

So while as a kid I watched Godzilla and Ultraman for the bright colors and cool creatures, as an adult I still enjoy it for the stories about nuclear war, environmentalism, fear of the unknown, and more. Godzilla the character was literally born of the bomb and Godzilla the film conceptually born out of the fears that manifested from its real life use. There’s a nice merging of base entertainment with high concept that keeps the kaiju genre going even more than 65 years after its birth!

For those unfamiliar, or have perhaps only seen earlier trailers, what can we expect in terms of the gameplay in Dawn of the Monsters?

Dawn of the Monsters is a 2.5D side-scrolling beat-’em-up in the vein of classics like Final Fight and Streets of Rage, but with the depth of modern action games like Bayonetta and God of War.

It has over 35 missions, equippable DNA Augments to upgrade your monsters’ abilities, a Platinum Games-inspired ranking system, fully dynamic destruction, 2-player co-op, massive Cataclysm Attacks, and brutal finisher moves to refill your health! It takes about 8-10 hours for an initial playthrough and then you’ve got plenty to unlock by getting an S + Rank on every mission.

Can you give us a breakdown of the campaign structure and the four monsters players can utilize?

The game follows DAWN (the Defense Alliance Worldwide Network) as they enlist a team of four giants to defeat the evil Nephilim threatening the planet. These are:

The campaign takes place across four distinct locations (Toronto, Foz Do Iguacu, Cairo, and Tokyo) and each location has a collection of missions you have to complete before you can move on to the next one. At the end of each mission you are ranked on your combat performance (think Bayonetta) and that ranking determines the quality of DNA Augments you can select from the loot screen. You then return to the command center where you can equip, sell, or reroll Augments, buy cosmetic, health, and rage upgrades, check out the archives, or listen in on conversations happening around DAWN HQ.

You’ve highlighted that this has been a collaborative project with numerous artists involved; can you tell us more about that?

The idea at the core of this game was to create the ultimate kaiju game, and to that end we really did not want it to seem like a parody or pastiche. We wanted it to pass the “sniff test” for giant-monster movie fans and to achieve that we wanted to bring in some top-tier kaiju talent to show how seriously we were taking this project.

So back in 2019 I actually visited Japan and got to speak with a few artists, and then through some friendships and connections within the kaiju community I managed to talk to even more. Ultimately everyone was really excited about the project and happy to get involved.

We managed to get Shinji Nishikawa (designer for several Godzilla films and the recent Gridman anime) to design a boss for us. We got Yuji Kaida (famed illustrator who has worked on Godzilla, Gamera, Ultraman, Gundam and even famous games like Ghouls’ n Ghosts, Snatcher, and Strider) to create a massive poster illustration that adorns the Limited Run Games collector’s edition box. We got Matt Frank (who has worked on Godzilla, Transformersand Ultraman comics) to design a miniboss for the game.

We got a lot of people involved in so many ways! Some of these are people we reached out to just because I’m a big fan, like Zander Cannon (who created the incredible Kaijumax comic series from Oni Press). The game is really a celebration of this classic genre so I’m really happy we got creators from around the world involved.

With the large-scale action, destructible environments and so on, has it been a technical challenge optimizing for Switch?

The game is almost entirely built in full 3D that is dynamically lit and dynamically destructible. That was super key to us because it had to feel great to smash buildings in a kaiju game!

There were certainly challenges! Despite being stylized to look like a graphic novel or manga, the game is almost entirely built in full 3D that is dynamically lit and dynamically destructible. That was super key to us because it had to feel great to smash buildings in a kaiju game!

However, having dynamic light sources, loads of 3D models, multiple characters, etc. can be pretty taxing on any console.

After a LOT of hard work from our team, we achieved something really great that I think Switch fans will be happy with. I’m really glad that we did not have to sacrifice resolution so the game looks just as crisp on Switch as it does on any platform at full 1080p docked and 720p handheld. It looks really slick on the Switch screen!

Aside from having big monsters on a portable screen, what are the pluses of playing Dawn of the Monsters on Switch?

Honestly, and I may be biased here, the game just feels “at home” on Nintendo Switch. We’re historically a Nintendo-focused developer and the Switch version was always a big focus for us at 13AM Games. I feel like Nintendo fans have a similar appreciation for 2D (or in this case 2.5D) and couch co-op as we do, and we even designed the campaign to be played in mission-based 5-10 minute chunks with portable play in mind.

Do you have a final message for our readers?

Thanks for taking the time to read this interview and thanks for your interest! It really means a lot to our team, especially after working on this game through a global pandemic and finally being able to share it with the world.

We’re incredibly proud of what the team over at Limited Run Games has come up with for our physical editions and the collector’s edition even comes with a download code so you do not have to wait to play.

Thank you to 13AM, WayForward, and Alex Rushdy for their time! Dawn of the Monsters will be available for the Nintendo Switch on March 15th, 2022.